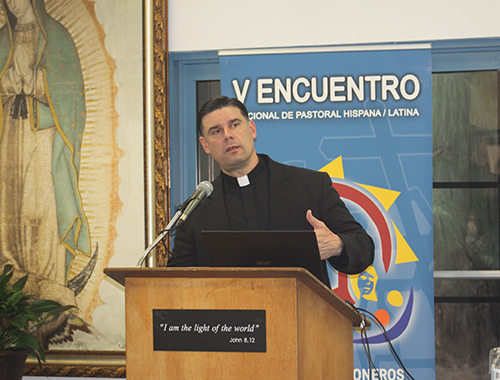 In this photo from June 2018, Father Rafael Capó, director of the Southeast Regional Institute for Hispanic Ministry, better known as SEPI, introduces a conference focusing on the New Evangelization in today's Church. The conference was part of the 40th anniversary celebration for SEPI, and was directed at teachers, alumni and collaborators of the various programs offered by SEPI.

MIAMI | As of July 1, Father Rafael Capó will assume the position of vice president of Mission at St. Thomas University in Miami Gardens. He has been appointed by Archbishop Thomas Wenski to promote and integrate the Catholic mission and core values of the university into all segments and areas of the institution.

Since Msgr. Terence Hogan, the university's former vice president of Mission, was appointed pastor of Mary Help of Christians in Parkland in January 2019, campus ministry needed a fulltime priest to work with youth ministry, said Archbishop Wenski. Father Capó "has experience with vocations as well as campus ministry and has worked on diversity issues. He's a very talented priest, and I think he's going to be a great addition to the campus," he added.

Father Capó is a priest from Miami, of Puerto Rican origin, who was ordained to the priesthood in 1996. He has served as director of the Southeastern U.S. Bishops' Regional Office for Hispanic Ministry, SEPI, for nearly 10 years.

He has a bachelor's degree in education and a doctorate in theology and is part of the Hispanic Ministry organizations at the national level. He is a member of the U.S. Conference of Catholic Bishops' Leadership Team for the V National Encuentro of Hispanic/Latino Ministry, and is a member of the National Advisory Team for World Youth Day. He is also an advisor to the National Catholic Network de Pastoral Juvenil Hispana (La RED).

Working with the Hispanic ministry, especially in the formation and accompaniment of young leaders, "has prepared me for this new assignment from the archbishop and the Church," said Father Capó, adding that he is excited about taking on his new assignment.

"It's an honor to be able to welcome Father Capó to our STU family," said David A. Armstrong, president of St. Thomas University, in a press release issued at the end of March. "With his leadership, in-depth knowledge and strong ties to the Archdiocese of Miami, we will be able to infuse Catholic identity into our university mission and strengthen our ties to the Catholic community," Armstrong added. 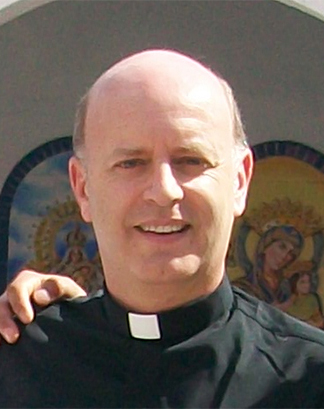 Father Capó said that this new position will allow him to accompany young people, many of whom are second and third generation Hispanics, from the university platform to make an impact beyond Miami.

There is a need to respond to the current challenges of the Church in the United States by strengthening the teaching of theology, campus ministry and the Catholic identity of the university, which is one of the few diocesan universities in the country. St. Thomas offers more than 45 undergraduate, graduate and post-graduate degrees on its campus in Miami Gardens, and through distance learning.

Father Capó pointed out that during his time as director of SEPI, it succeeded in "forming leaders not only for Hispanic ministry, but for Hispanic leadership to serve the Church at large."

SEPI is the organization that coordinates and supports Hispanic ministry through evangelization, formation and mission in the 30 dioceses that make up the Southeast region (Alabama, Florida, Georgia, Kentucky, Louisiana, Mississippi, North Carolina, South Carolina and Tennessee).

Father Capó said that during the coronavirus pandemic, SEPI has refocused its services of formation and accompaniment. More than 5,000 students throughout the southeastern region participated in master's studies and training workshops on virtual platforms. They also provided spiritual accompaniment and online psychological therapy to the most affected Hispanic communities.

Currently, Hispanics within the Church of the United States represent more than 50 percent of the Catholic population, according to documents from the V National Encuentro of Hispanic/Latino Ministry held in September 2018 in Texas. During its more than 40 years, SEPI has been preparing ministers to assume leadership responsibilities within Hispanic ministry in the dioceses and in the Church.

"I am very proud that I have been able to accompany young people and diocesan leaders who are not only volunteering in parish or youth ministry, but who have assumed diocesan positions and some have even worked at the U.S. bishops' conference in Washington," said the priest.

The new leadership team of SEPI is made up of the executive director, Father Emilio Sotomayor, a Piarist religious who is currently the pastor of Annunciation Church in New York, and Olga Villar, director of formation.

Father Sotomayor, a former member of the Piarist community in Miami, is well acquainted with the ministry of SEPI. He has taught in SEPI's schools of ministry and has supported Hispanic ministries with young adults and vocations in the Southeast.

Villar also has a long history of working with Hispanic ministry. She is the director of Hispanic Ministry in the Archdiocese of Mobile, Alabama; teaches master's classes at SEPI; and has been part of the Southeast regional team for the V National Encuentro.

On Tuesday, June 30, 2020, Archbishop Wenski will preside at a Mass at SEPI to bid farewell to Father Capó and welcome SEPI's new leadership team.