St. Jerome teacher, now a 'museum fellow', offers to share her expertise with others 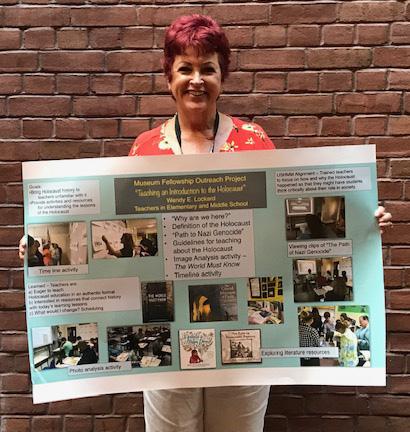 St. Jerome School teacher Wendy Lockard holds up her project on Ã¢â¬ÅTeaching the Holocaust to Middle School TeachersÃ¢â¬ and Ã¢â¬ÅThe Lessons of the Holocaust to Elementary Teachers.Ã¢â¬ She successfully completed a Museum Teacher Fellowship at the U.S. Holocaust Memorial Museum in Washington, D.C. 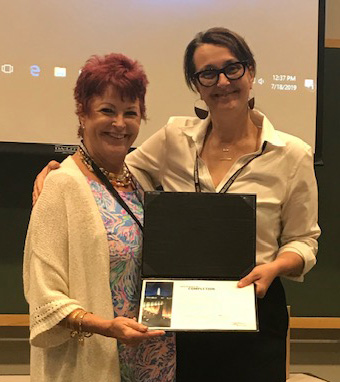 FORT LAUDERDALE | Wendy Lockard no longer teaches history or social studies, but that hasn’t quenched her passion for the subject. At St. Jerome School in Fort Lauderdale, where she has taught for more than three decades, her students tease her that she knows how every crack in the school’s sidewalk was made.

Teaching has always been in Lockard’s DNA, too. After seven years in the classroom in New Jersey, not all that far from Montclair State University, her alma mater, she moved to Florida and planted her roots again, this time at St. Jerome parish, where she also serves as a lector and extraordinary minister of holy Communion.

Lockard once taught social studies, but for the past 10 years has been teaching English literature, grammar and vocabulary courses. She said she hopes she never stops learning so she can keep her teaching fresh and relevant for her students.

“I have been at St. Jerome School for 31 years,” she said simply. “I have never wanted to go anywhere else.”

Most importantly, she said, “I like to be where the Gospel is” and her active, diverse parish sustains her.

In 2008, Lockard, a Davie resident, took part in the Goethe Institut’s Transatlantic Outreach Program in Germany. One of the members of her cohort was Maine’s only Holocaust educator, who piqued her interest in teaching the lessons taught by the Holocaust. The subject has held the history buff’s rapt attention ever since.

“I’m interested in bringing the events of the past into the present, and making them relevant to the kids,” Lockard said. “Over the years, it’s about 15 years total that I’ve been involved in teaching kids about the Holocaust.”

To build her repertoire on the topic, Lockard studied at the United States Holocaust Museum in Washington D.C. and at the Anti-Defamation League in Boca Raton, and became one of 15 educators selected for travel to Israel for further study.

Last year, she was accepted into the Museum Teacher Fellowship Program at the U.S. Holocaust Museum. Since 1996, when the program began, it has produced more than 400 museum fellows. The resulting corps of Holocaust educators work to lead the museum’s efforts in secondary schools by organizing and leading conferences and workshops, writing curricula and lesson plans, serving on boards of Holocaust museums and education centers, leading study trips to Holocaust sites and more.

“The Museum Teacher Fellows play a vital role in bringing the lessons of the Holocaust to communities around the country,” said Gretchen Skidmore, director of the museum’s education initiatives, in a press release. “Teaching students critical thinking skills as well as providing resources that encourage in-depth examination of how and why the Holocaust happened are key components of the museum’s ongoing engagement with educators across the country.”

Samantha Subin, who works in the museum's Communications Department, noted via email that a recent study conducted by the Conference on Jewish Material Claims Against Germany, found that two-thirds of American millennials cannot identify what Auschwitz was and 49 percent cannot identify a ghetto or concentration camp.

The museum annually selects about 20 educators — from grades 7 through 12 — as new Museum Teacher Fellows. They come into the program with considerable knowledge of the era, teaching experience in the subject and possibly with participation in community and professional organizations that deal with the Holocaust. They leave as experts and serve in their communities as resources.

In Lockard’s cohort of students selected from throughout the nation, three were from Catholic schools.

“It was a daunting, daunting application,” she said. “I was one of 24 teachers from throughout the nation who were selected to work together over the past year in their respective schools or communities to bring Holocaust education to the forefront.”

Lockard’s efforts resulted in 90-minute presentations: “Introduction to the Holocaust” for middle school teachers and “Teaching the Lessons of the Holocaust” for students in grades 3 through 5. Upon her recent return to Washington, where she presented her projects, she was named a museum fellow — one of two Catholic school teachers in her class, and one of only a dozen throughout the history of the program.

Her current study interest is the variety of roles women took in the Holocaust, but she said she’s also eager to assist her fellow educators, particularly those in the archdiocese, who are interested in teaching the lessons learned during that brutal, terrifying era in world history.

“There are Holocaust educators within the archdiocese who would be willing to train new teachers,” she said. “The Holocaust was a sin against humanity. We have a responsibility to teach about what happened so that we never forget.”

Other News from St. Jerome School