Our Lady of Charity blesses Miami

Maritime procession kicks off celebration that will culminate with annual Mass Sept. 8 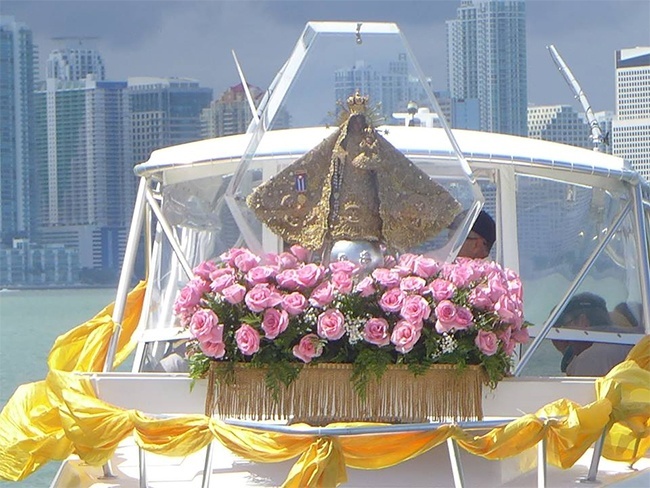 The pilgrim image of Our Lady of Charity is outlined against the Miami sky as she makes her way through Biscayne Bay blessing the city and its residents. 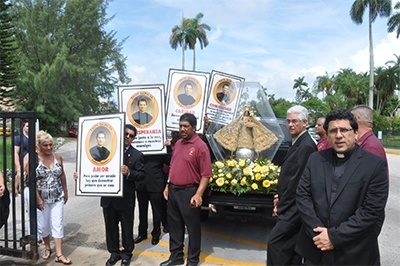 Father Juan Carlos Paguaga, right, pastor of St. John Bosco Church in Little Havana, is accompanied by members of his community as he returns the pilgrim statue of Our Lady of Charity to the shrine on Biscayne Bay. Before the shrine was built, the image smuggled out of Cuba found its first home at St. John Bosco Parish. Every year it returns there the weekend before the start of the novena.

MIAMI | Following the tradition of recent years, the pilgrim statue of Our Lady of Charity processed by boat through Biscayne Bay Sept. 1, blessing the city of Miami and its residents.

The maritime procession marked the beginning of the annual celebration that will culminate Sept. 8, the feast day of Cubaâs patroness, with a Mass at the Bank United Center on the campus of the University of Miami in Coral Gables.

The pilgrim statue arrived at the National Shrine of Our Lady of Charity shortly before noon Sunday accompanied by Father Juan Carlos Paguaga and a large group of his parishioners from St. John Bosco Church in Little Havana. The parish served as the first home of the image after its arrival in Miami in 1961, before the shrine was built. 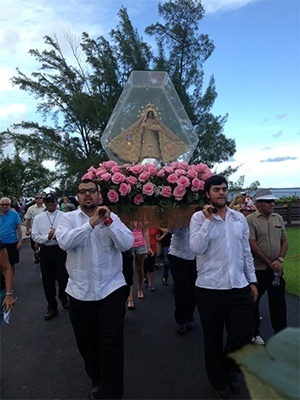 Members of the Hispanic Youth Group carry the pilgrim image of Our Lady of Charity towards the shrine after she returned from the maritime procession.

Every year, the pilgrim statue returns to St. John Bosco to start the novena of prayer that ends with the Mass on her feast day. At St. John Bosco, parishioners welcomed the image with prayers and mariachis on Friday, and venerated it until Sunday morning.

Meanwhile, at the shrine, the image was welcomed by a large throng waving the Vatican, Cuban and U.S. flags along with flags of nearly every other Spanish-speaking nation.

After the celebration of Mass, the image made its tour of the bay, stopping at various places: In front of Mercy Hospital, where Father Juan Rumin Dominguez, rector of the shrine, prayed for all the sick; in front of Miami City Hall, where he pleaded for harmony between the cityâs residents and its political leaders; in front of the Freedom Tower, where prayers were said for the liberation of Cuba; and at the mouth of the Miami River, where Father Dominguez prayed for all who live in South Florida.

After the maritime procession, a large number of faithful who congregated along its seawall â a small scale replica of the one that protects Havana â welcomed the image back to the shrine. There, the celebration continued with music, dancing and typical foods.

On Sunday, Sept. 8 at 4 p.m., the image of Our Lady of Charity will be ferried from the shrine to the Bank United Center, where the rosary will begin at 5:30 p.m. followed by Mass at 7 p.m. Archbishop Thomas Wenski will be the main celebrant, accompanied by many of the priests of the archdiocese. 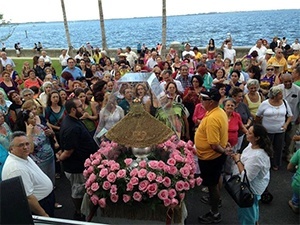 The faithful sing to the image of the virgin after her arrival at the Shrine of Our Lady of Charity. 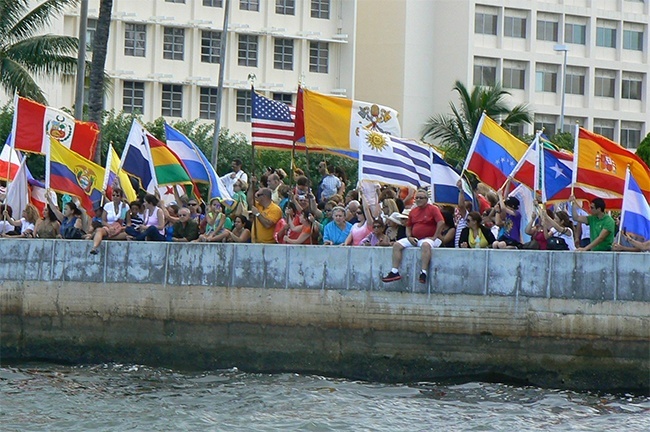 The faithful await the arrival of the image of Our Lady of Charity along the seawall at the Shrine.