Diabetes diagnosis prompted Anthony Coniglio, 16, to express himself through music

DAVIE | In a 2011 YouTube video that he posted at the age of 14, Anthony Coniglio plays an âafter-concert treatâ â a prelude from Bach's Prelude and Fugue No. 2 in C minor â during a show at the Steinway Piano Gallery Concert Hall in Coral Gables.

The twist is that the youngster from Davie is seen playing the piano in the upside-down and seemingly impossible posture that he and film audiences saw in the 1984 movie, âAmadeus,â about the life of Mozart.

But it was only four years earlier, while a student at St. Mark the Evangelist Catholic School in Southwest Ranches, that with the encouragement of his parents and teachers, Anthony started reading music and learning to play the piano. It came as a response to a life-altering and unwelcomed diagnosis of Type 1 diabetes.

âWhen I got diagnosed with diabetes at nine years of age I was very frustrated and to help me express my emotions my parents enrolled me in a music school,â said the current sophomore at Archbishop Edward McCarthy High School and Florida Virtual School, a distance learning program which enables him to spend more time on his musical studies.

âIt was not a high level music school; but playing the piano helped me express my emotions and the anger I had from the diabetes,â he said. 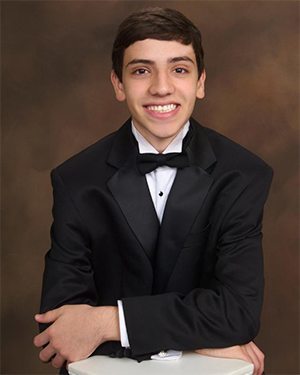 Piano prodigy Anthony Coniglio, 16, took up learning music and playing the piano at the age of 9, as a way of dealing with a diagnosis of Type 1 diabetes. He graduated from St. Mark School in Southwest Ranches and is now a sophomore at Archbishop Edward McCarthy High School next door.

Managing Type 1 diabetes requires significant changes to lifestyle and routine, and presents affected youngsters and their families with real hardships and the need for close monitoring. The condition must be managed indefinitely and is usually fatal unless treated with insulin. Injection is the most common method of administering insulin although other methods are insulin pumps and inhaled insulin.

But Anthonyâs love of music and a solid prayer life propelled his determination to work through his health challenges. âI ran with it and excelled very much with the music,â he said. âI love to play the piano and to play music.â

Things moved along fairly quickly from there as Anthony met other musicians and teachers, each of whom played a supporting role in his musical education. At the same time, the youngster held up an exceptional academic performance that has not wavered, according to his family. He was a 2012 Pinnacle Award winner at McCarthy High.

The young pianist was still playing on an inexpensive keyboard when teachers recommended a more serious approach.

âI had a mediocre keyboard that I was practicing on at home but it was not a real piano with all 88 keys; the way that the keys felt was not natural so what I had been practicing on for a year and a half was not very good for my technique,â he said. âI knew I had to get a piano.â

Michael Rowe, music director at St. Mark the Evangelist School, kept had a spare piano which was old, out of tune, dirty and not functioning properly. Even a piano tuner couldnât get it to stay in tune. He thought of giving it to Anthony.

âHe was a very well behaved, very courteous and a great kid,â Rowe said. âHe discovered this gift and we at the school took the opportunity to let him play for our choir and he became our accompanist and played in the school band.

âLater he on he went to Archbishop McCarthy High School and played some musicals with us and played the score and practically took charge.â

Music is valuable for every Catholic school student, according to Rowe. âI could be anywhere else, but I teach at a Catholic school because there is nothing more powerful than praising God with song, and I love to have the kids value that, so that in the future we have adults who worship with song and that they feel this is part of their musical heritage in the Church.â

Anthony used Roweâs second-hand piano for many months until he realized it was hampering his technique and advancement. Finer pianos can cost upwards of $10,000 and the family was having trouble finding a good one they could afford.

Enter prayer.
âI realized that I was not having success with looking so now what I needed to do was to turn to God to hope that he would answer my prayers so I could get a new piano to practice on,â Anthony said. âIn 2009, I started to pray the rosary every day that somehow I could get a piano of good quality.â

His mother, Gail Coniglio, is a Catholic marketing professional with Ignatius Productions, a Jesuit apostolate founded by Jesuit Father Mitch Pacwa. She had taken her son to a staff meeting and celebration with friends in Alabama, where a would-be patron heard Anthony perform and of his hopes for a professional-grade instrument.

âWhen we got home from Alabama we got an email from that person to call a piano store that was going out of business,â Anthony said. âThe man said, âHow would you like it if I bought you a brand new Yamaha piano to practice on?â It was just amazing that our prayers were answered and that God had provided this man.â

The result was a Yamaha upright piano in pristine condition and valued at $13,000 with another $2,000 donated for the cost of shipping the instrument to Florida. âI was very blessed that God answered my prayers with this piano,â Anthony said.

His mother points out that the day the piano arrived was almost three years to the exact hour after her son started to play. âWhen he got this he went wild with it and practiced and practiced and played scales like he was never able to play before,â she said. âThe growth amazed everybody. The piano was a really blessing.â

Anthony later asked his patron in Alabama to serve as his confirmation sponsor, but with Rowe standing in as a proxy. Anthony was also a sponsor for the confirmation of his younger sister, Courtney.

More recently, Anthony, now 16, has been studying with renowned American pianist Phillip Evans, a former faculty member of both the Juilliard and Manhattan schools of music who currently teaches at Lynn University Conservatory of Music in Boca Raton.

The youngster is also a scholarship student with the Miami International Music Academy in a series of master classes held at the Steinway Gallery in Coral Gables.

Meanwhile, Anthony says he wants to major in music in college and focus on piano performance. To get into a top music college conservatory is a process based mostly on performance and less so on academics, so the preparation continues.

He said he looks to some of the piano and classical music giants like George Gershwin, Frederic Chopin and others for inspiration.

âOne that I really like is Johann Sebastian Bach,â Anthony said. âI feel he is the greatest composer because his music is very sophisticated and complex, and it amazes me that he was able to write the music that he did in his lifetime.â