Gala raises $1 million for the poor

English Spanish
View of the table set-ups and decorations at the Gala for the Poor.

Juggler Tim Irwin entertains the guests at the Gala for the Poor.

Archbishop Thomas Wenski speaks to Gabriel and Maria Rodriguez of Our Lady of Guadalupe Parish in Doral.

Archbishop Thomas Wenski speaks to Father Remek Blaszkowski and Msgr. Jose Juan Quijano of St. Vincent de Paul Regional Seminary in Boynton Beach. Nearly 1,000 people turn out at the Hilton Miami Downtown Oct. 25 to celebrate the Archdiocese of Miami's 55th anniversary, while at the same time raising more than $1 million for programs through which the Church helps the poor in South Florida. The Gala for the Poor included a live auction conducted by former Channel 4 weatherman Bob Soper and concluded with a performance by The Gypsy Kings.

Dan Cellucci of the Catholic Leadership Institute,which helped the archdiocese with its Synod, poses with his wife Tricia and their son Peter.

Archbishop Thomas Wenski chats with Bernard and Delores Wolff of the Knights of the Holy Sepulcher.

Archbishop Thomas Wenski poses with Che Scott, right, and Thomas Abraham, one of the contributor sponsors of the gala.

Archbishop Thomas Wenski and John Dooner, left, prepare to sit down to dinner as Katie Blanco-Crocquet, president of the archdiocesan Development Corporation, chats with Bob Dickinson.

Archbishop Thomas Wenski addresses donors at the Gala for the Poor marking the archdiocese's 55th anniversary.

Archbishop Thomas Wenski presents an original painting, created by a student at Schott Communities for Persons Who Are Deaf or Disabled, to Bunny Bastian, chair of the Gala for the Poor.

NBC6 anchor Pam Giganti serves as mistress of ceremonies for the gala.

Gricelda Ramos, 17, who attends the St. John Bosco Leadership Learning Center, shares her testimony with guests at the Gala for the Poor.

Former CBS4 chief meteorologist Bob Soper serves as auctioneer during the live auction at the gala.

Msgr. Michael Carruthers, pastor of St. Augustine Church and Catholic Student Center in Coral Gables, poses with members of his staff and missionaries who are helping with the UCatholic Campus Ministry.

The Gypsy Kings put a final musical touch on the evening with their "flamenco-rock" fusion.

The Gypsy Kings put a final musical touch on the evening with their "flamenco-rock" fusion.

Keith and Doreen Koenig dance to the music of the Gypsy Kings at the end of the evening. 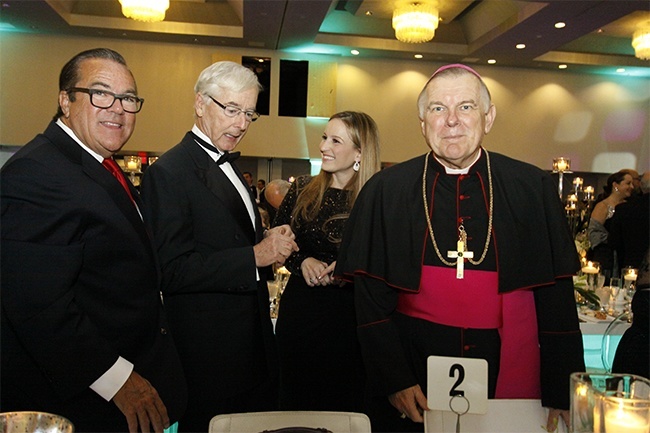 Archbishop Thomas Wenski and John Dooner, left, prepare to sit down to dinner as Katie Blanco-Crocquet, president of the archdiocesan Development Corporation, chats with Bob Dickinson.

MIAMI | One guest described it as "high-tech and high-class."

Certainly the Gala for the Poor marking the Archdiocese of Miami's 55th anniversary was all that and more: It was the largest single fundraising event in archdiocesan history, generating more than $1 million for Catholic agencies and programs that help the needy in South Florida. 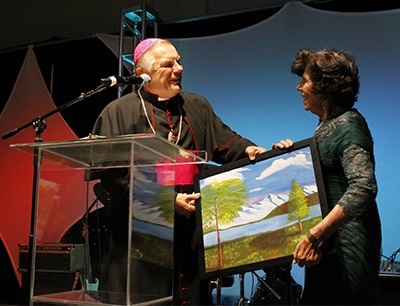 Archbishop Thomas Wenski presents an original painting, created by a student at Schott Communities for Persons Who Are Deaf or Disabled, to Bunny Bastian, chair of the Gala for the Poor.

"Like Pope Francis says: We have to take care of the poor and that's our top priority," said Father Brendan Dalton, pastor of St. Bernadette Parish in Hollywood and supervising principal of Archbishop Edward McCarthy High School in Southwest Ranches.

He attended the event as part of a two-table group of donors from McCarthy High, which was one of three St. Francis of Assisi sponsors for the gala. The other two were DiMare and Simply Healthcare. (For a complete list of sponsors and donors, click here).
They were joined by more than 1,000 other guests who gathered at the Hilton Downtown Miami Oct. 25 for a night of music and dancing with Soul Survivor and the Gypsy Kings.

The high-tech part was the silent auction set-up, which allowed bidders to text their bids - and keep tabs on other people's - via their smartphones.

"This is amazing. Incredible," said Susan Soper as she tried to squeeze through the crowded hotel area where cocktails were being served. Soper is married to Bob Soper, former chief meteorologist for CBS4.
The Sopers, who now live in Wellington, are not even Catholic. Bob Soper served as the auctioneer for the live auction that took place during the dinner. But both were involved in fundraising for the Catholic Home for Children when they lived in the area. 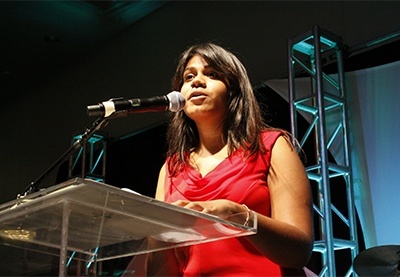 Gricelda Ramos, 17, who attends the St. John Bosco Leadership Learning Center, shares her testimony with guests at the Gala for the Poor.

"It's nice to come back and see so many people we haven't seen for years," Susan Soper said.

Another local broadcaster, Pam Giganti of NBC6, served as mistress of ceremonies for the evening, which also featured a special performance of "Angels Among Us" by the Lourdes Academy Singers.

Archbishop Thomas Wenski also presented a special gift to Bunny Bastian, a member of Epiphany Parish in South Miami and generous donor to the archdiocese who served as chair of the gala. She was given an original painting created by one of the artists who attends the Schott Communities for Persons Who Are Deaf or Disabled.

The most moving part of the evening, however, was the brief testimony of Gricelda Ramos, 17, a student at the after-school Leadership Learning Center sponsored by St. John Bosco Church in Little Havana.

"You may not believe in miracles but I am a living testament," she said, of the work that the Catholic community does to help the poor.

Noting that she lives in a neighborhood that is infested with drugs, violence and the sex trade, she said that she is "not a statistic" thanks to her attendance at the Leadership Learning Center.

A video shown at the dinner, "Because of You," also highlighted some of the work done by agencies and parishes in the archdiocese to help the poor. The funds raised by the dinner will go directly to continue funding those agencies and ministries.

"This just flows out of the archbishop's vision, in union with the Holy Father, to be a Church for the poor," said Msgr. Michael Carruthers, pastor of St. Augustine Church and Catholic Student Center in Coral Gables.

He attended with some of the student leaders from the UCatholic Campus Ministry at the University of Miami.

"This is well worth it. That is why people have responded," said Rosa Don of Gesu Church in downtown Miami.

"We hope this will establish a precedent to keep helping the needy," said Roger Perez of St. Timothy Church in Miami.


GALA BENEFICIARIES
Some of the Archdiocese of Miami social outreach initiatives which will benefit from the funds raised by the Gala for the Poor are:
Katie Blanco-Crocquet, chief development officer and president of the archdiocese's Development Corporation, said the gala was a once-every-five-year event. A similar gala was held five years ago to mark the archdiocese's 50th anniversary.

But Blanco-Crocquet's office raises funds year-round to keep the archdiocese's central offices funded and to raise additional money for the archbishop's charitable projects.

Among those ongoing fundraisers are the annual ABCD appeal (ArchBishop's Charities and Development); two Cheers to Charity events in the spring, one in Miami-Dade and the other in Broward; the Archbishop's Poker Run for motorcycle enthusiasts; and a Man Cave event, featuring a Havana-style evening with cigars for men only. The last two were held for the first time in 2013.

The development office also helps donors who want to include the archdiocese or a particular ministry in their estate plans. 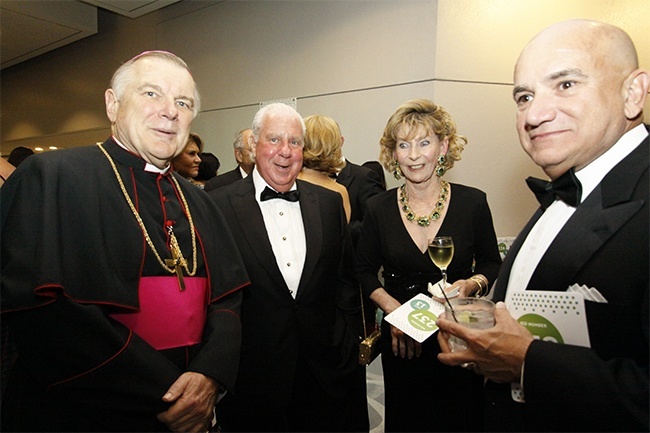 Lissette Elguezabal - 11/07/2013 09:23 AM
Congratulations on a huge night! This success makes all at The Archdiocese, winners, benefiting the needy in our communities.