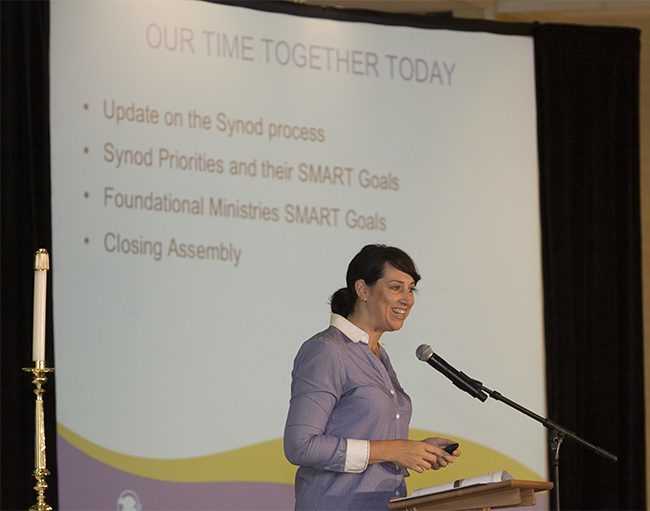 MIAMI | After 18 months of work by more than 800 volunteers, the second general Synod of the Archdiocese of Miami will officially come to a close on Saturday, Oct. 26 â and every Catholic in the archdiocese is invited to attend.
For those who canât make it, the closing Mass and assembly will be live streamed on the archdiocesan website â www.miamiarch.org â as well as broadcast on Radio Paz 830 AM and the EWTN network.
The day will begin at 9 a.m. with a Mass celebrated by Archbishop Thomas Wenski, followed by the closing assembly at 11:15 a.m. The assembly will feature a keynote speech by Cardinal Oscar RodrÃ­guez Madariaga of Tegucigalpa, Honduras, one of the eight cardinals tapped by Pope Francis to advise him on the reform of the Vatican administration.
The cardinal also will hold a press conference at the conclusion of the assembly, which is expected to be around 12:30 or 1 p.m.
At a break between the Mass and assembly, those in attendance will be able to browse through a ministry fair put on by archdiocesan employees and representatives of Catholic pastoral groups and organizations.
During the closing assembly, the three overall priorities of the synod will be announced, along with quantifiable, time-bound goals in five key areas. These goals will serve as the operating priorities â the new strategic plan â for the archdiocese during the next three years.
âThese are the areas where the greatest effort must be placed â not the only effort, but the greatest,â said Rosemarie Banich, synod director. âThe synod was just a process to get there. But for the next three years, all of us in the Archdiocese of Miami will be living with this new strategic plan.â
Although all the details will be made public at the closing ceremony, Banich shared the three overall priorities in one of her Synod Snapshot columns, which are published on the archdiocesan website and sent via email blast to all those on the archdioceseâs electronic mailing list.
The priorities are:
These priorities will be broken down into specifics in the final synod document, Banich said. âThe entire plan is set around very specific goals, with dates, with numbers built in.â
Already in the works: Four archdiocesan advisory boards to advise Archbishop Wenski on the governance of the archdiocese. One board already exists but will be revamped: the finance council. Three more will be created: a pastoral council, a school board and a development council.
Members of the synodâs 18 focus teams also will present their work at the closing assembly. These are the people who studied, categorized and summarized the suggestions made by archdiocesan Catholics at the 14 listening sessions held in the summer of 2012. They then turned those suggestions into SMART â specific, measurable, attainable, relevant and timely â goals that formed the basis for the synodâs final priorities.
âThe caliber of people who served on those focus teams really cannot be overstated,â Banich said. âThese goals come from a place of experience and knowledge and more particularly passion and love for the Church and that particular service area.â
The closing assembly will be held at the Miami Hilton Downtown, 1601 Biscayne Blvd., Miami. All of the faithful are invited and encouraged to attend but they are asked to please R.S.V.P. by going to www.synodmiami.org, calling 305-762-1088 or emailing [email protected]