Father Hurricane: a genius of meteorology 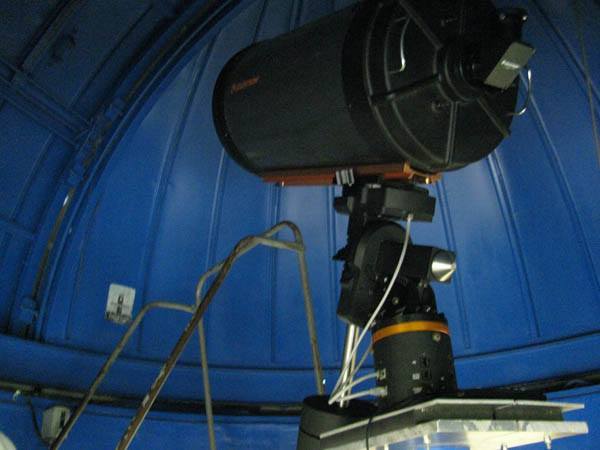 The telescope at Belen Jesuit Prep, one of the few schools in the nation with an observatory.

MIAMI | Before the age of satellites and airplanes, a Jesuit priest in Cuba found a way to predict the path and landfall of hurricanes.

On Sept. 12, 1875, Father Benito Viñes predicted for the first time in history the arrival of a hurricane that would pass through Cuba. It was the first weather forecast of its kind recorded in the Western Hemisphere, and it was made a day before a hurricane hit the southern coast of Cuba. Thanks to this, many lives were saved, and he became known as "Father Hurricane." 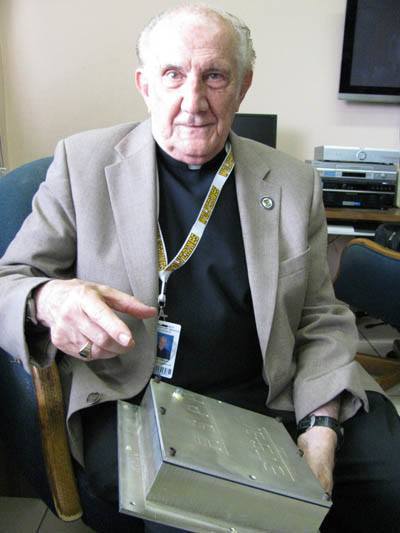 Jesuit Father Pedro Cartaya, director of the observatory at Belen Jesuit Preparatory School, holds the box with seeds that was sent into space on the shuttle Discovery a few years ago.

Father Viñes was a Jesuit who came to Cuba from Spain in 1870 to become head of the Meteorological Observatory at El Colegio Belen in Havana. Shortly after his arrival, he witnessed the disaster that hurricanes caused and decided to do something to alleviate the effects of this terrible phenomenon.

"He spent a lot of time observing the sky and clouds," said Jesuit Father Pedro Cartaya, director of the Father Benito Viñes, SJ Observatory at Belen Jesuit School, which reestablished in Miami after Cuba's communist government put an end to private education in the early 1960s.

Father Viñes cataloged other clouds and concluded that "when white or cumulus clouds come, for example, from the north, the hurricane was just southeast; when he saw black rain clouds, called nimbus, coming from the east, for example, the hurricane was south. He put all this information into a device called an inner phase cyclonoscope with which it is possible to locate exactly where a hurricane is," said Father Cartaya. 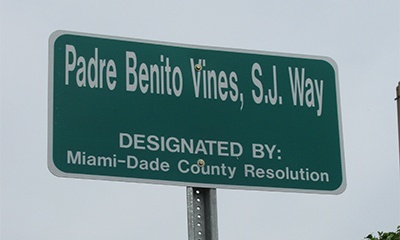 A street on the corner of Belen Jesuit Prep is now named Padre Benito ViÃ±es, S.J. Way" after the priest from Colegio Belen in Cuba who became known for his accurate predictions of the arrival of hurricanes and is considered the founder of tropical meteorology.

"He said, 'In the first decade of June, a hurricane leaving Africa going through the Caribbean is going to curve at such an altitude'. He was really a genius of meteorology," Father Cartaya said.

Father Viñes founded a network of meteorological stations in the Caribbean and is considered the founder of tropical meteorology, because he introduced a more accurate methodology for predicting hurricanes.

"Until then, only sporadic observations were made. They knew that a hurricane was coming, but not where it was going," Father Cartaya said. "His exact predictions gained him great praise. He was called 'Father Hurricane' because of the accurateness of his predictions."

In fact, there was a time when hurricanes were called Viñesas: Viñesa 1, Viñesa 2. "But the pronunciation was difficult for Americans, so we missed the opportunity of having them bear the name of a Jesuit. At first they gave them the first names of saints, then of women, then of men and women, and so it is today," Father Cartaya said. 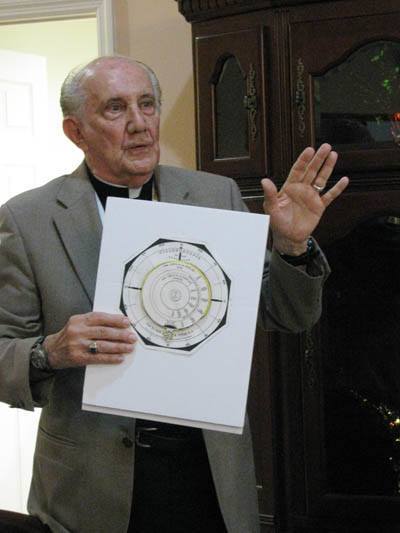 Jesuit Father Pedro Cartaya explains the use of the cyclonoscope created by his Jesuit predecessor, Father Benito ViÃ±es.

Father Viñes' first hurricane forecast was followed for many others. One of those was in 1876: He made contact with Puerto Rico and told them that a hurricane would be passing through the south of the island. He also warned the people in Santiago de Cuba to get ready, and everything happened as he predicted.

Shortly before his death in 1893, Father Viñes completed a detailed treatise on the circulation of hurricanes. He had devoted much of his life to the study of weather phenomena and did most of his great work in advance of science and for the benefit of humanity during his time at Colegio Belen in Cuba.

Although the Jesuits remember him as one of their most prominent figures, Father Viñes has remained virtually unknown among later generations. That was partially remedied earlier this year, on the 120th anniversary of his death, when Miami Dade County, through the efforts of Commissioner Jose "Pepe" Diaz, renamed the corner of Sixth Street and 128th Avenue in Southwest Miami as "Padre Benito Viñes SJ Way".

Belen Jesuit Prep in Miami has continued the tradition of Father Viñes thanks to the alumni of the class of 1972, who donated money and talent to build a meteorological and astronomical observatory at the school, as well as a ham radio station. Belen is one of very few schools nationwide with an observatory, and the only one in the United States equipped with a 16" telescope with a CCD camera for astrophotography.

Students have an astronomy club that meets every Tuesday, and the school recently added astronomy as an elective. Twenty-five students are now receiving daily lessons from a specialist in the field.

In addition, Belen students, led by meteorologist Peter Añon, broadcast the weather report daily on the archdiocesan station, Radio Paz 830 AM, and Radio Mambí. They recently started doing the same thing on CNN, during a broadcast which airs only in Miami at noon.

"Whenever we start a club meeting I read a short paragraph from the Bible," Father Cartaya said: "In the beginning God created the heavens and the earth ..."

"But understand," he adds, "that if we are enjoying the creation, the universe, the immense factory of this architect, this creator, this God who made us, it is not only to study and learn something about Jupiter, Mars or Saturn; it is to try to reach God through what we are seeing and observing."

A few years ago, the school was invited by NASA to place an experiment aboard the shuttle Discovery.

"One of our students, a 16-year-old, wearing a space suit, took aboard the box that I now have in my hands, which contained DNA molecules and a variety of seeds," Father Cartaya recalled. "To my surprise, as I was dressed as a priest, one of the seven astronauts who were going on board told me, 'Reverend, would you mind giving us your blessing?

"They liked it; it was a very beautiful experience," Father Cartaya said smiling.

As for Belen's observatory, "We are very proud because we connect earth with heaven, the bad with the divine. What God has given us we return to him in the form of observation, research, discussion. And that makes us feel that we really are part of God's work."

"There are many ways to reach God," Father Cartaya added. "Some people reach God through the medical field, seeing the wonder of healing a human being; others through a spiritual retreat; but in astronomy we reach Him through the work he gave to us, the steps that make us ascend toward him.

"I always say to my students: Let us offer this meeting to the God who gave us this so that we might know each other better through the work of his creation. And so Father Viñes and I combined our vocation as priests with the science that we love." 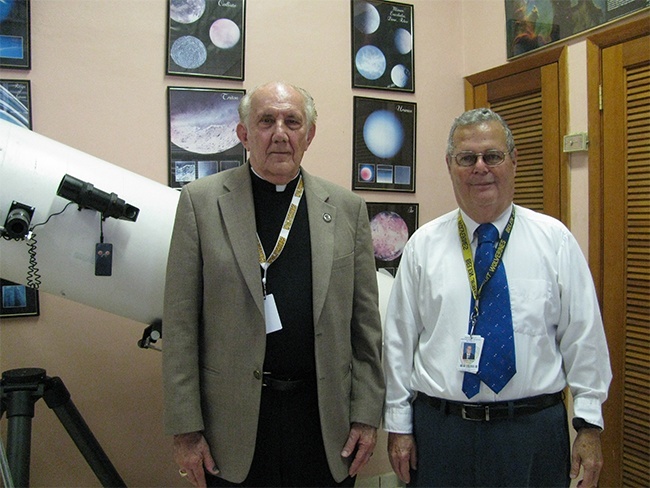 Jesuit Father Pedro Cartaya and meteorologist Pedro AÃ±on pose for a photo in the observatory of Belen Jesuit Prep.