'Grateful' to serve - for decades

MIAMI | Over five decades, Sister Cecilia Chen has served refugees from Egypt and Liberia. She's fought for the rights of immigrants from Central America and the Caribbean. She's taught children in Tokyo, Dublin and London.

But as she celebrated her 50th anniversary at St. Mary Cathedral, one reaction was topmost for her: "Gratitude for this vocation. Gratitude to help others from other countries. Gratitude to this diocese for the opportunity to serve immigrants." 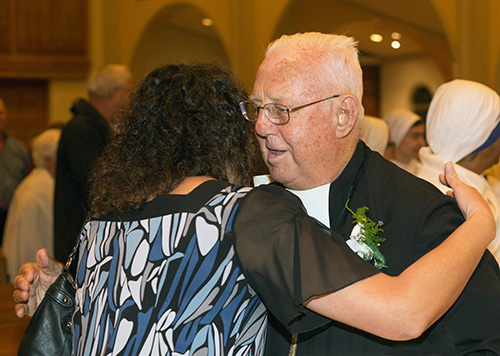 "Grateful" and "gratitude" were much-used words Jan. 31 at the Mass marking jubilees at the cathedral. The Mass, in observance of the World Day of Consecrated Life, celebrated the anniversaries of seven members of religious orders, who have served from 25 to 75 years in their vocations.

And maybe everyone should adopt the same attitude, suggested Brother Charles Filiatrault, observing his 60-year jubilee. 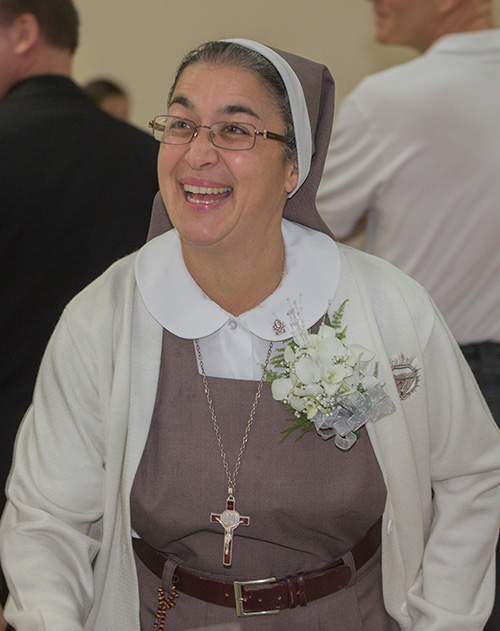 Sister María José Socías, of the Servants of the Pierced Hearts of Jesus and Mary, who was marking 25 years, reacts to the ovation she received as she walked into the reception hall after the Mass.

"The older you get, the more important are two words: 'Thank you,'" said Brother Charles, 79, who has served fellow Marists in administration and translation. "Life is good. The journey has been very good."

About 200 well-wishers attended the Mass, half of them from religious orders themselves. They included Marist Brothers, three of whom were among the seven honorees. They included Adrian Dominican Sisters and Daughters of St. Paul. There were Carmelites from California and Daughters of Mary from Nigeria. Also members of Jesus de la Caridad from Mexico and Missionaries of Charity from India.

The jubilarians are part of a special corps of servants in the Archdiocese of Miami: 45 religious orders of women and 26 of men, totaling more than 270 brothers, sisters and priests. The Jan. 31 Mass was the first in a series of archdiocesan events in line with the Vatican's Year of Consecrated Life.

Each jubilarian was introduced from the pulpit, as a brief account of his or her ministry was read to the congregation. Then each went to the archbishop for a handshake, a rosary and a certificate of appreciation. Finally, they stood at the front of the sanctuary for a round of applause. 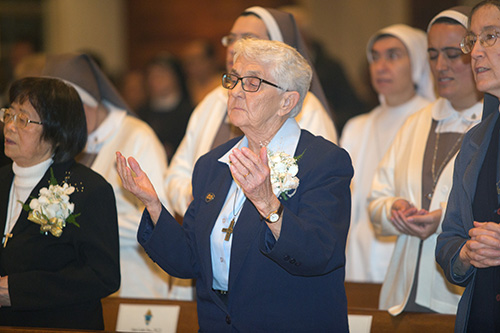 Sister Mary Patricia Hale, of the Sisters of Notre Dame de Namur, who was celebrating 70 years of religious life, prays The Lord's Prayer.

"I like to say that the consecrated are the Church concentrated," Archbishop Wenski said in his homily. He said the story of the archdiocese would be impossible to tell without recounting the many religious who have ministered in local parishes, schools, hospitals, nursing homes and elsewhere.

He praised the religious for their "prophetical witness of Jesus Christ, who showed himself to be the friend of the least, the lost and the last."

"We thank you for your service â and for your witness â because we honor you not only for what you do but for who you are," he said.

Born in Lowell, Mass., he has taught and counseled in schools from Miami Gardens to Eugene, Ore., to Guadalajara, Mexico. He even came out of retirement in 1995 to volunteer in Texas, Japan and Liberia.

"I thank God for my good health," said Brother Norbert, who still volunteers an hour a week at St. Louis Covenant School. "I'm healthy and happy. I've had a good life."

Despite their age, the jubiliarians have often related to younger generations. Sister Mary Patricia Hale, celebrating her 70th anniversary, taught in several eastern U.S. cities â including New York, where she also ministered to neighborhood gangs.

Sister Joan L. Kehn, who couldn't attend the Mass because of another engagement, has taught at schools in Chicago, Vero Beach and West Palm Beach over her six decades as an Adrian Dominican. She now helps to direct religious education at St. Gregory the Great School.

"I've learned from the youth to be young," said Brother Eladio, 78. "They're very honest. Adults use courtesy. Youths are straight."

For Sister María José Socías, a member of the Miami-based Servants of the Pierced Hearts, youth work has become pro-life work. She has worked for the archdiocesan Respect Life Office and helped organize its Chastity Days for nine years. She has also counseled for Project Rachel and the crisis pregnancy centers.

"I have a deep feeling of gratitude to the Lord for the gift of this vocation," said Sister María José, observing her 25th anniversary. "I believe in showing compassion and love, and to teach young people of the gift of their life."

After the Mass, the archdiocese hosted a reception at the parish hall. Just before saying grace, Archbishop Wenski announced one more gift: commemorative candles on the tables, recalling the day as the feast of the Presentation of the Lord, when liturgical candles are blessed. He applied the occasion to the lives of those in religious orders: "Their witness is a light that shines in the world."

Waiting on the diners were 60 lay associates, known as the Apostles of the Pierced Hearts â some in their preteens, some over retirement age.

Sofia Gran, 10, said the night's honorees inspired her own thoughts on service. "God bless them, they're helping other people. God would love it. My own mission is to make everyone happy, to serve them like God would."

"It's amazing to hear and witness all that these men and women have done over 60 and 75 years of service â and they're still serving," said Sister Ana Margarita Lanzas, director for religious in the archdiocese. "I hope that when I get that age, I'll still be serving."