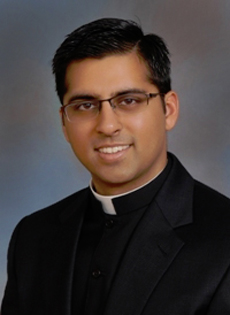 This blog was originally written as a submission to The Disciple, the semiannual publication of the seminarians of St. John Vianney College Seminary in Miami, where Father Martin is a lecturer in philosophy.

In these uncertain times, when we hope to navigate the pandemic and look forward to normal seminary and parish life, we would do well to ask for the intercession of St. Joseph, who teaches us how to be priests in the midst of the uncertainty and ambiguity that characterize our contemporary world. Joseph is a striking example of fidelity and willingness to live in mystery. Even when he did not have a clear-cut answer to the challenges before him, Joseph placed his trust in the heavenly Father in order to be a saintly father himself. We priests and seminarians ought to do the same.

There is no simple instruction manual for being a father. Most men struggle to figure it out even when they do have excellent models of manhood in their life. In our times, when so many lack good role models, more than a few young fathers wish they had someone to show them the ropes. Young priests and seminarians too can easily feel overwhelmed by the challenges presented to them by their parishioners, who look to “Father” for an answer to the deep questions of the human heart. Yet, when it comes to so many of the challenging issues and situations before us, there simply isn’t an easy or comfortable answer. Often, doing the right thing means tremendous personal sacrifice and trust that God will see us through. It means being ok with not knowing if your plans and goals will succeed or not.

Before turning our attention to St. Joseph, we might look to another Jewish father who lived in challenging times similar to ours and who also changed the world for the better. Born to an Orthodox Polish-Jewish immigrant family, Jonas Salk, the 20th century American scientist, is best known for developing the polio vaccine. Whereas scientists before him had used a live but weak virus to develop their vaccines, Salk utilized a non-infectious killed virus instead.

Yet before the vaccine could save countless lives, Salk, not knowing exactly whether it would work or not, had to test it on human subjects (animal testing had already been completed). In his kitchen, he injected himself, his wife, and his three sons. Before asking other families to take the risk, he risked his own life and the lives of those most precious to him. Soon others, 1.8 million of them, volunteered for testing as well, and thanks to their joint efforts and sacrifices, the polio vaccine was quickly declared safe and effective.

When they asked him who owned the patent, Salk said not Pfizer, Moderna, or Johnson & Johnson, but “the people.” He asked the interviewer, “Could you patent the sun?” The most feared disease of the 20th century was brought down by a father who cared, who didn’t ask for a dime, and who wouldn’t ask others to take on a risk that he himself wasn’t willing to accept for himself and for his own family.

Everyone, religious or not, can recognize the contribution of Jonas Salk, especially as we face the ravages of COVID-19 in our own day. Yet few, only those with the eyes and ears of faith, can see, in the example of silent St. Joseph, a father who gave us an even greater remedy, Jesus Christ, for the even deadlier diseases of sin and death itself. Joseph is a father who took on an even greater risk with far less clarity and chance of success.

A few of his fellow scientists might have told Salk his method wouldn’t work, but I’m sure there were far more detractors and naysayers in Nazareth who told Joseph to divorce Mary and run in the opposite direction. While Salk had the support of government and higher education (President Franklin D. Roosevelt had polio and set up a national foundation which provided funding for Salk’s vaccine trials), Joseph was chased out of his country by Herod’s slaughter of the innocents and had to flee to Egypt, the place of slavery. Salk was able to see the triumph of his vaccine and the virtual elimination of the polio virus, but Joseph died before he could really see the fruits of his labors, before the public ministry and resurrection of Jesus. Needless to say, 2,000 years later, sin is still very much with us, and we still struggle to accept the ever-available cure.

The priestly fathers of the future will have to take risks, make plans in the midst of uncertainty, and confront the ambiguities of the 21st century. They will not be given an instruction manual and yet will have to trust in God to answer the new questions that will be posed to them, questions that even the best seminary preparation cannot resolve beforehand. They will have to learn how to undergo trials not of vaccines but of the human heart. They will take pains to offer Jesus, a cure that many will reject, a vaccine the world has yet to approve. In all this, St. Joseph is for us a most excellent role model and powerful intercessor, a man who embodied fatherhood in the most uncertain of times.

Deacon Tom Hanlon - 05/10/2021 10:14 AM
Fr Daniel, Your article brought back some memories. My Uncle died of Polio in 1942 and I remember my Grandmother crying in total aguish at his death. I was very young at the time. Today I can only encourage others to get the shot for the virus, shingles shots and flu vacations. I spend time with MDPD officers and never stop reminding them that it for their safety and their families and fellow officers and staff to receive vaccinations. Blessings Father!

Valli Leone - 05/10/2021 09:13 AM
Father Daniel, your article has expanded my heart in ways too wonderful to express! Surely the Holy Spirit inspired you to share this blessing with all of us here in the Archdiocese during the year of Saint Joseph—as we continue to endure through COVID-19. My husband’s childhood friend had a mother who did not require her son to take the polio vaccine because he was afraid of it. He died in his early 20’s from polio. Thank you for sharing the information on the selfless giving of Jonas Salk and his family, so similar in many ways to the lives of Joseph, Mary and Jesus himself. I pray by the power of God’s love that you will continue writing and sharing the Good News in Word and through the Sacraments and that He will keep you strong and healthy in spirit, soul and body all of the days of your precious life! Jesus never fails! âï¸âï¸ð