A celebration of love 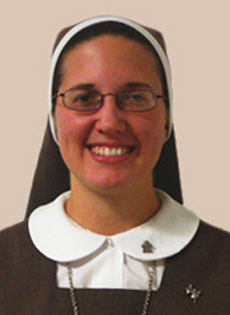 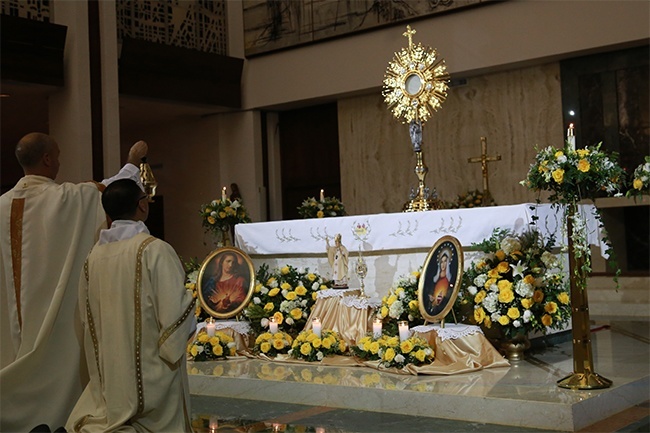 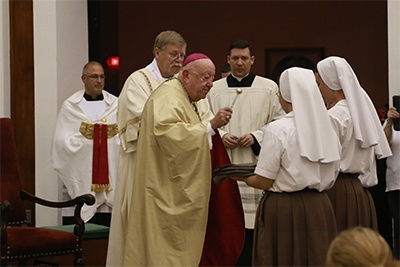 Miami Archbishop Emeritus John C. Favalora blesses the habits of three aspirants of the Servants of the Pierced Hearts who would later profess their vows during the Mass that opened the all-night vigil on the feast of the sacred hearts of Jesus and Mary.

This past weekend, my religious community celebrated our annual all-night vigil in honor of the Sacred Heart of Jesus and the Immaculate Heart of Mary. Each year, we gather for a Mass on the solemnity of the Sacred Heart, followed by all-night adoration with different reflections, prayers, and intentions leading up to a Mass at 6 oâclock the next morning in honor of the Immaculate Heart of Mary. It is a night to honor authentic love, love that spares nothing for the good of the beloved.

Father Joshua Johnston from the diocese of Baton Rouge, ordained only three weeks ago, kneels in front of the Blessed Sacrament while praying the rosary.

It is this love that we see enfleshed in the Sacred Heart of Jesus, aflame with love for humanity, yet pierced with the thorns of our sins. The Immaculate Heart of Our Lady reveals to us the same love â a love that allowed itself to be pierced with a sword, allowing her only son, the Son of God, to suffer and die for the redemption of the world, and participating in his self-offering. One of the particular intentions of these vigils is for priests and religious since they are called to live the love of these two hearts in a more exemplary way: their vocations are a call to follow Jesus and his way of life more closely.
All of us, regardless of our vocation, are called to live this high dignity of love. However, it is a particular call of the consecrated soul to live this love in a more radical way. A husband and wife are called to bear sufferings for the sake of the other, and with the other to grow in union with each other, and as a family with their children. As religious, this dynamism of love takes on a universal dimension, since we unite any sufferings that come with the suffering of Christ, our bridegroom.
In choosing to love in all things, and by embracing the small sufferings that come our way and uniting them to the cross of the Lord, religious life becomes an icon of Our Lady standing at the foot of the cross of Jesus. She stands there receiving the blood and water that pours from his heart, uniting her suffering to his, in order to carry it to those who are longing for the redemption it wins. 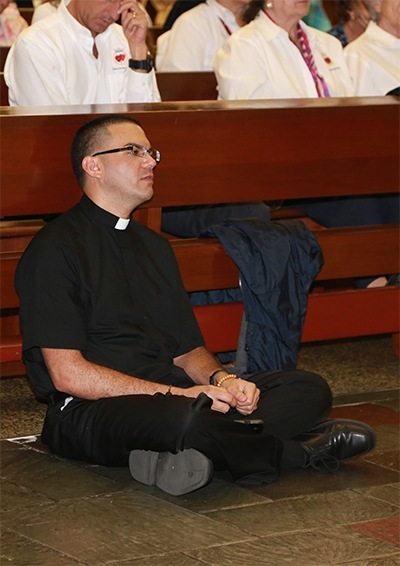 Newly ordained transitional Deacon Javier Barreto, from the Archdiocese of Miami, sits in front of the altar praying the rosary during the all night vigil on the solemnity of the Sacred Heart of Jesus and the feast of the Immaculate Heart of Mary.

In a beautiful detail of the Lord, the celebration of the love of the Pierced Hearts of Jesus and Mary this weekend concluded in my religious community with the celebration of the first profession of vows of our three novices. In making this concrete act of love, they have chosen to offer themselves totally to the Lord to participate with him in his self-offering on the cross, allowing their own hearts to be pierced for love, in order to take the blood of the Lord that is poured forth, that bears such fruitfulness, to the many hearts in our world in need of his love.
This is the gift and the joy of consecrated life, to participate more deeply in the mysteries of the heart of Christ in order to bear his life to the world, just as Our Lady did and continues to do. 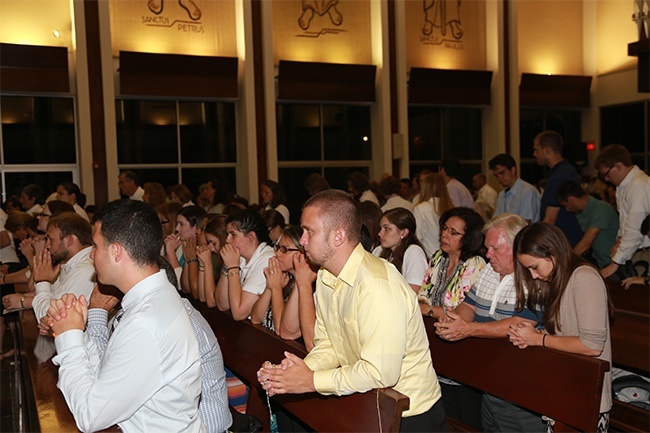 Young people from Illinois State University were among those who took part in the all-night vigil, which drew people from churches throughout the Archdiocese of Miami as well as other dioceses.