A joyful shout shook the heart of the huge crowd gathered at the foot of the Sanctuary of the Virgin of Caacupé when their bishop, Msgr. Claudio Giménez, presented Pope Francis with the yearning of all the Paraguayan people that Chiquitunga would soon be the first woman canonized in that nation.

"Holy Father, we thank you that you have many times honored the women of Paraguay. There is a Paraguayan woman whom we would like to see on the altars. So far we have one saint, St. Roque, a Jesuit like you. Will we ever have the joy that a Paraguayan Discalced Carmelite be one, too? Her name is Chiquitunga, and the process is very close to you in Rome." 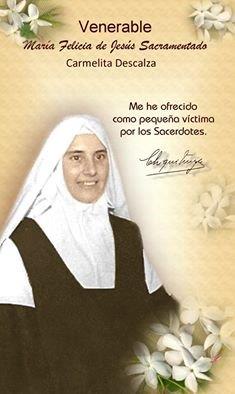 Venerable Maria Felicia de Jesus Sacramentado, lovingly known as Chiquitunga in ner native Paraguay. The phrase says, "I have offered myself as a small victim for the priests."

María Felicia Guggiari Echeverría was born in Villarrica del Espíritu Santo, Paraguay, on January 12, 1925. The first of seven children, at home they called her by the familiar name of "Chiquitunga." That is how she is recognized and invoked with affection by her Paraguayan people. A large number of devotees gather on the 28th of each month in the chapel of the Carmelites of Asunción to remember, thank and celebrate the life of this young woman, a Discalced Carmelite who died in 1959, and whom Pope Francis proposed as a model for the youth of Paraguay.

Educated by the Salesian Sisters since the age of five, she received a solid Christian formation and developed a profound love for the Eucharist. At age 16, she joined the ranks of the newly established Catholic Action, where she found a perfect environment for her enthusiasm for the apostolate: the children receiving catechesis, young workers, and college students with their many struggles. At all times she retained a preference for serving the poor, visiting the sick in the hospital and in their homes, and for the elderly of the neighborhood.

She graduated as an elementary school teacher while taking time to attend and participate fully in the meetings and projects of Catholic Action.

In 1950, her family moved to Asunción, where María Felicia finished her teacher training. In the assemblies of Catholic Action she meets a medical student, who, like her, is a devoted lay leader. With him, she bicycles to the dangerous slums, where she cares for the sick and elderly. There she tells them about Christ and gives them her solidarity and support.

Their shared devotion to the poor engenders a special affection between them. Her friend wants to be a priest and must leave for Rome. For María Felicia, the time comes to offer and deliver such a pure love of the heart to God, because even though she thinks she is in love with him, she discovers that she loves Jesus more.

A woman committed to her faith, she feels that she needs to take that extra step that will lead to a total surrender. In one of her visits to the sick in the Spanish hospital, she meets Mother Teresa Margarita, prioress of the new foundation of the Carmelites of Asunción. They have serious discussions about Jesus, prayer, the interior life and Teresian spirituality, and she discovers that God is calling her to the contemplative life. The young, model Christian teacher decides to leave the school she loves so much to follow a higher calling.

On the feast of the Presentation of Jesus at the Temple, Chiquitunga enters the monastery of the Carmelite Sisters of Asunción as a postulant and receives the habit on August 14 of that year, 1955. Her father, of a liberal background and anticlerical spirit, initially does not want her to be a nun. But when he visits her, he is so impressed with the peace and joy of the convent that he tells his other daughters that they will not find any opposition if they want to be Carmelites.

In the manner of Teresa of Lisieux, Sister Felicia of Jesus in the Blessed Sacrament delves her way into the hidden life in Jesus. Her religious sisters remember her "spirit of sacrifice, charity and generosity, always wrapped in great gentleness and communicative joy."

Her four years in the convent were a journey in simplicity, her life marked by contagious joy, charity, generosity, always smiling at everyone, with helpful love for her sisters and priests, daily prayer, always remembering the poor and the needy. Praying for them was the best apostolate.

Before making her final vows, she contracts infectious hepatitis, and lands in a city hospital for a month and a half. While still recovering, she suffers a massive hemorrhage. The Mother Prioress immediately calls her brother, a doctor, who soon diagnoses her with a then incurable disease: purpura.

It was a terrible and painful moment because he knows that despite all his medical knowledge, he will be unable to save her. (Purpura is a type of internal bleeding that produces blood stains in different parts of the body; the bone marrow fails to produce red blood cells.)

In prayer, she asks Jesus to heal her because she wants to serve Him on this Earth, but surrenders everything to God's hands.

On Easter Sunday 1959, she enters the agony of death. She asks the Prioress to read her the poetry of Saint Teresa of Avila: "I die because I do not die." She seemed to be sleeping, almost sitting on the large pillows, as she hardly had the strength to breathe. All of a sudden, as if shaken by a strong inner energy, she sits up straight, her eyes wide open, and says, among other words: “How happy I am!” “What a joy is this encounter with Jesus!” “Jesus, I love you.” “How sweet an encounter!” “Virgin Mary!”

Death left on her face the sweet smile that had characterized her in life. It was 4:10 in the morning and she was 34 years old.

Her body lay in vigil in the chapel of her convent. After four years of living strictly in the cloistered monastery, of having no contact with the outside, everyone watched in amazement as crowds came from all over the place â priests, men and women religious, students, friends, members of Catholic Action, relatives, the poor who remembered and were grateful for her generous care â to venerate the one they already considered a saint. People flooded the chapel, the courtyard, the street, the gardens. Everyone wanted to touch her with their rosaries and medals, to bring them back as relics.

The process of beatification began in 1997; in 2010, Benedict XVI recognized the heroic virtues of Chiquitunga and declared her "venerable." In the Eucharistic celebration of July 11, 2015 in Caacupé, and then during a lunch with the bishops of Paraguay in the Apostolic Nunciature, Pope Francis became interested in the process and promised his efforts and those of Cardinal Angelo Amato, prefect of the Congregation for the Causes of Saints.

If the miracles the doctors are now discussing in Rome are confirmed, Chiquitunga would become the first Paraguayan woman declared Blessed, a firm step towards her canonization.