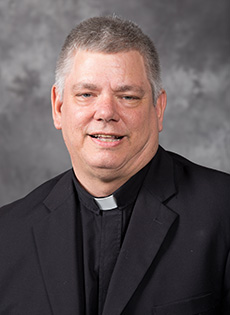 Born Dec. 5, 1962, in North Miami, Father McCormick is the fifth of eight children born to a Quaker mom and Presbyterian dad who converted to Catholicism in 1966. "They said they converted because they were tired of being called sex maniacs in the Protestant church." He grew up in St. Bartholomew Parish, Miramar, and graduated from Cooper City High School in 1981. His involvement in young adult groups led to his appointment as a "wisdom person" for the archdiocesan synod, 1985-1988. He was ordained in May 1996, and served at St. Louis Parish, Pine crest; and St. Andrew, Coral Springs; before being named pastor of St. Maximilian Kolbe in March 2002.

What did you do before becoming a priest?

He worked at a Sony manufacturing plant. "We built mixing consoles for recording studios. â¦ It was very tedious work. But I did it for eight years. It enabled me to get involved in a lot of ministries. I worked my eight hours and then went to churches."

When did you know you wanted to be a priest?

"Almost immediately after high school, because I just loved what I was doing for the church. â¦ I just wanted to make a difference for God. To be honest, I didn't think that because of my disability, the seminary would give me one look."

Why didn't you continue being a lay person?

"As a lay person, I had been involved in as many things as I could probably be involved in. But it just seemed that God was calling me to something beyond that. I'm very glad I followed up on that because I've been very happy as a priest. I mean, you can only say you're a young adult for how long?"

What would you be doing if you had not become a priest?

"I really thought at different points that I was going to become a youth minister or a young adult minister. (The church) is such a part of my life, I can't imagine my life being not part of that."

What is your disability?

He has cerebral palsy. "It's probably because I was so premature. I was born in the sixth month, which, in 1962, it's quite amazing that I survived."

What is people's reaction to your disability?

"The first two weeks I'm in a parish, people are just so terrified I'm going to fall crashing to the ground.â¦ It's how the Lord made me. I was born with this. I've always had to go through life knowing that there were certain limitations."

"I just wanted to make a difference for God."

What do you do on your days off?

"I read my comics. I do a lot of things that most people do on the weekend, such as go to the dentist, get my hair cut, go to the bank."

What is your favorite movie?

"Godspell" â "I memorized that entire album when I was 9 years old. I put it on and I still enjoy it."

What is the most difficult aspect of being a priest?

What is your greatest disappointment?

"That probably falls under my greatest challenge â the times that I'm not able to be there for someone." 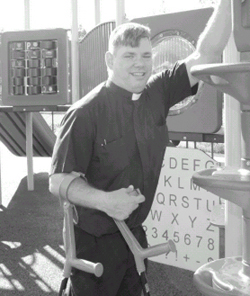 What is your greatest joy?

"Preaching. That and hearing somebody's confession who's been away for a long time. To know you've made such a substantial difference in someone's life just by being there."

What is your description of the ideal priest?

Priestly stereotype that should be discarded?

Who was most surprised by your vocation?

Some of his friends, who told him: "'Priests aren't supposed to be funny. You can't be a priest. You laugh too much.' Of course, it's been my experience that priests have the best sense of humor."

What is your favorite type of music?

Contemporary Christian music, 88.1 WAY FM: "I turn it off when they start to preach because I can't deal with their theology."

What do you collect?

Comic books: "I've been reading comic books since I was 10." His favorites: Avengers, X-Men, Justice League.

Who do you most admire?

Miami Auxiliary Bishop AgustÃ­n RomÃ¡n "because he breathes and lives his ordination."

What do you fear the most?

"That people will see our faith as irrelevant, because the Catholic faith has been under such heavy attack. It's hard to see our faith so heavily ridiculed."