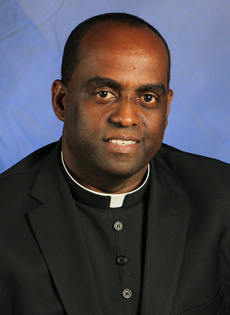 Born Oct. 18, 1967, in Jean-Rabel, Haiti, Father Jean-Mary is the fifth of seven brothers and sisters. His father was a farmer who wanted him to study agronomy, but he was interested in law as a way of fighting the injustice he witnessed in Haiti. He finally settled on accounting âbecause it was something practical and less burdensome. But it was not my vocation.â He entered St. John Vianney College Seminary in 1992 and was ordained for the archdiocese in May 2001.

He now leads a mission church with more than 2,000 registered families, where more than 4,000 people come to Mass each Sunday.

At age 7, he was inspired by the example of his parish priest, Father Jean-Marie Vincent, who was murdered in Haiti in 1994. âHe was a very down-to-earth priestâ who played soccer with the kids, brought bands to the town and helped the peasants. âTo me that was the perfect image of a priest who established a balance between the spiritual and the temporal.â He did not think about the priesthood again until age 19. âI was in search of meaning in my life. Thatâs when I began to discern a vocation.â He spoke to a priest in his hometown who gave him two books to read on the lives of Blessed Charles De Foucauld and St. Louis de Montfort. âI think that was the wake-up call in my life. After reading those two books, I felt that God was calling me.â

âI worked one year as an accountant for a French organization.â

He entered the Montfort Fathers in 1989 and was sent to their novitiate in France, but realized he did not want to become a religious priest. While visiting family in south Florida in 1991, he met people who told him, âWe need priests here. Why should you go back to Haiti?â He met Father Thomas Wenski (now bishop of Orlando) and spent the summer at Notre Dame dâHaiti, working alongside another young Haitian (now Father RobÃ©s Charles of Divine Mercy Haitian Mission in Fort Lauderdale). Thatâs when he decided, âThe Holy Spirit knows what heâs doing. Iâm going to let myself be carried by the winds of the Holy Spirit.â

"I believe that God is on my side wherever I go."

He spoke neither English nor Spanish when he entered St. John Vianney Seminary. He now speaks English and Spanish in addition to French and Creole, and is trying to learn Ibo, a Nigerian language. âThe role of the church is to preach integration, not isolation or assimilation. â¦ The more languages you know, the more world is open to you.â

Visits his sister in Fort Lauderdale, who is a single mother of three. âI play a father role in the lives of my nephews.â

âBeing a priest and being a servant of God and of his people. I think that is the greatest blessing in my life.â 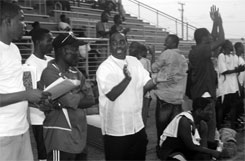 âTo see that we are still in that mess in Haiti.â

âPeople have a lot of expectations of you. People see you in such a high standard. And you know your limitations as a human being.â

A Haitian stereotype: âThat priests have moneyâ because Haiti is a missionary country and the church provides everything to the people.

Playing soccer, watching movies and reading. âOn my day off I will go to Barnes & Noble for at least two hours.â

âNothing. I have no fear. I believe that God is on my side wherever I go.â