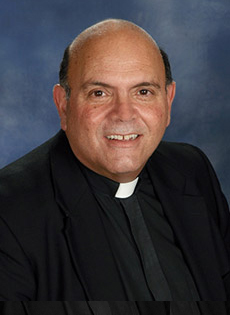 Born Oct. 13, 1950 in Cuba, he came to the U.S. with his family at age 11, graduated from Hialeah High School and served in the U.S. Army. He entered the seminary at age 40, after 13 years as a criminal defense attorney, and was ordained for the Archdiocese of Miami in 1996. In addition to his duties as pastor, he also serves as a judge in the Metropolitan Tribunal and supervising principal of St. Brendan High School.

On his delayed vocation:

âThe one person in my family who was not surprised was my dad. He said, âI kind of expected it 20 years ago. What took you so long?ââ

On being an attorney:

âI love the law. Having been a lawyer has helped me be a more effective priest, because I can get my thoughts across to people.â

âI like jury trials. I have to be with people. I just get energized by people.â

On becoming a canon lawyer:

âI thought that I was done with the lawâ¦ Iâm convinced God has an enormous sense of humor.â

All the years he was a lawyer, he knew God was calling him to the priesthood. So he attended Mass daily and led a celibate life. âIf you do not have the grace to live (celibacy) beforehand, then you should have the humility to decline.â

"When I chose not to be rich to become a priest, I became the happiestâ¦ â

âJust because weâre priests doesnât mean weâre above it all.â He goes to confession at least twice a month, preferably once a week: âIt is not because Iâm in grave sin. It is because I wish to avoid sin.â

âI knew obedience was going to give me a lot of headaches, because I had been on my own so many years.â So before entering the seminary, âI sold my Mercedes. All of my properties I placed in trust for the benefit of my parents. I would allow only $50 a month for my personal expenses.â¦ I had to physically tell myself, you have to enter this discipline.â

âWe are not walking about in clouds or sitting on high pedestals. My connection with God is no different than the people I serve. In fact, I know that their connection is a better connection. Mine has static.â 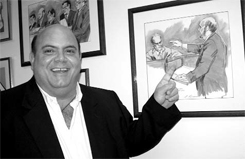 Artistâs sketches hanging in the rectory of St. Brendan show Father Heria as a criminal defense attorney during a high-profile drug case in Chicago.

Most frustrating part of priestly ministry:

âThe administrative partâ¦. If we are not careful we can lose our sense of spirituality.â

Father Pedro Luis Perez, pastor of San Lazaro Parish in Hialeah, whom he has known since age 12: âI pray that through my years of priesthood I can always be as consistent and as transparent as he has been.â

âIn the beginning of my seminary life I thought that I had waited too long. As I look back I realize thereâs no reason to regret. Because God has used it all.â

On the role of a priest:

âSometimes, when people come to see a priest, they want our prayers. They also want to see the human aspect of a priest. They donât ask for much: a kind word here and there, a supportive hand, and lots of prayer.â