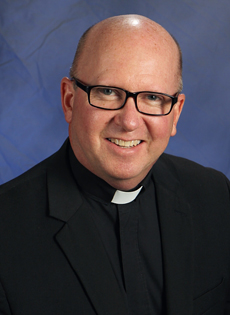 The oldest of three children, Father Davis was born in Hamilton, Ohio, Sept. 16, 1963. He entered the Pontifical College Josephinum in Columbus, Ohio, in 1981, studying for the Archdiocese of Cincinnati. A summer doing evangelization work in Mexico proved âdramatically impactfulâ and he decided to move to a âmultilingual, multicultural part of the church in Americaâ in order to do âcross-cultural ministry.â

The fact that his grandparents lived in Dania Beach and his parents had a connection with Archbishop Edward McCarthy - his brother was their pastor - made Miami a logical choice. He moved here in 1985, spent a year studying theology at the North American College in Rome, then returned to St. Vincent de Paul Regional Seminary in Boynton Beach. He was ordained for the archdiocese in May 1990 and has been assigned to Archbishop Carroll High School since 2000. He also has helped out on weekends at Our Lady of Lourdes Parish in Miami since 1992.

An altar server since fourth grade, he attended a high school with a âvery vibrant Catholic atmosphere.â

One day, the librarian, a nun, asked him what he wanted to do with his life. His reply, âI'll probably be a teacher.â Her reply, âYou're going to be a priest. I am going to pray for you every day so that you'll be a priest.â Another time, he was playing golf with the priest who was principal of the high school who told him, âYou just might have what it takes to be a priest.â He gave up a full scholarship to the University of Dayton to enter the seminary at 17. âI went in willing to give it a try, one year at a time.â By senior year, âIt was obvious this is what I wanted to do.â

âMy father: He was a nonpracticing Catholic during all my growing up years.â After Father Davis was ordained, âhe started going to church and is now a daily communicant.â

"Sometimes I feel like Obi Wan or Luke Skywalker with the light saber, battling the forces of evil."

âI wanted to be a dentist, an astronaut for NASA, a pilot for Delta Airlines.â He also could have followed in his father's and grandfather's footsteps - both of them were local golf professionals - and joined the PGA.

âI have not been able to be directly responsible for someone going into the seminaryâ even though he has worked hard at Archbishop Carroll High School to create âan environment where vocations are possible.â

âI do love to travel. I've been to all 50 states and like to go to other countries. I find that a spiritual experience, to discover God in new places.â

âI'm not a movie buff. I love âStar Warsâ though. I have all the DVDs.â

âTo maintain the spiritual disposition of the priesthood in an otherwise secular job description. Most of what I do (as president and principal of a high school) does not require me to be a priest.â Father Davis poses with Palestinian boys in Jericho during a trip to the Holy Land in June 2006. âWhat did Jesus look like when he was a little boy? I wanted to have a sense of this.â

âThe Good Friday dimension of priesthood is heavy. Being on the front line and fighting the good fight on behalf of the church and furthering its mission.
This is not Father Davis' personal agenda. This is the agenda of Christ and the church.We're constantly battling a lot of dark forces of evil and brokenness. Sometimes I feel like Obi Wan or Luke Skywalker with the light saber, battling the forces of evil.â

âGood things are worth sacrificing for. There are causes that lead ordinary people to do extraordinary things.
If heaven is the goal, then celibacy for the kingdom makes sense.â

âThere is none. There were many different talents, temperaments and spiritual gifts among the apostles and they were all close to the Lord. I see ideal priests on every different front.â

âBeing separated from the Lord. Not being with Christ. That would be a frightful and hellacious destiny.â