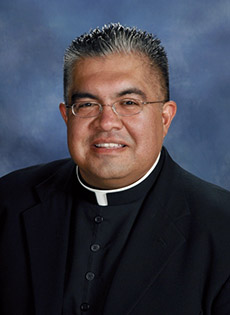 Born Oct. 2, 1967, in Tulia, Texas, Father Garza is the oldest of four children. His great-greatgrandparents were cattle ranchers from southern Spain who settled in that area of the U.S. when it was part of Mexico. His parents moved to Clewiston when he was young and he graduated from Clewiston High School before entering St. John Vianney Seminary. He was ordained for the Archdiocese of Miami on May 11, 1996, and served at St. Mary Star of the Sea in Key West before being sent to Rome to obtain a licentiate in missiology from the Gregorian University. He worked with Catholic Charities and as pastor of San Isidro Parish in Pompano Beach before being named archdiocesan vocations director in January 2009.

He worked as a bank teller while pursuing a degree in architecture. He ultimately received a two-year degree in drafting.

Even though his family was religious and attended Mass faithfully, the thought never entered his mind. "I wanted to be married, have a lot of kids and be an architect." Then a friend from the youth group at San Isidro Parish insisted he attend a vocations retreat in Conyers, Ga. "I didn't know what a vocation was. â¦ I went to the retreat just to get him off my back." By the last day, "I decided, I've heard so much, I like this. So why not try it out?" He began the discernment process and entered the seminary at age 20. "They told me, at any point, you can leave. You don't commit until you reach ordination. That was a sense of relief for me. I had nothing to lose. I said to myself, 'I'll give it a chance.'"

"They told me, at any point, you can leave. â¦ That was a sense of relief for me. I had nothing to lose."

Person most surprised by his vocation:

"My father was adamantly against me being a priest" and did not speak to him for a year after he announced his decision. In part, his father feared the priesthood would take him too far from his family; in part, his objections were rooted in the anti-clericalism that exists in the Mexican culture. "We don't like priests but we go to Mass." Father Garza's vocation "healed a lot of my family's misconceptions about the priests and the nuns" and his father "eventually became my greatest support and my best friend." Ironically, Father Garza has remained geographically closer to his dad, who died in 2000, than any of the other children, who moved to other states. His dad is buried at Our Lady of Mercy Cemetery in Miami. When he visits there, Father Garza likes to remind him, "Here I am again; your only son who's here."

Parish administration: "A parish is almost like a business. You have to run it. You have to make decisions and if you're not prepared, you're going to make bad decisions."

"I probably would have pursued architecture. I still read and I have my drafting table. I still draw."

"Dealing with the fact that you can't please everybody."

"A priest who loves and forgives as Christ does; who does not judge." 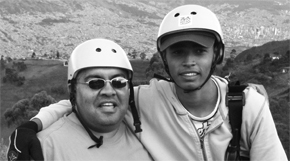 Whenever he travels to the mission in Colombia, Father Garza takes a day to go paragliding off a 9,000-foot mountain. He took up the sport three years ago. "I feel freedom." Here he poses with his paragliding instructor/partner, a young man known by his nickname, "La Garza" (the heron). A video of Father Garza paragliding can be seen at old.miamiarch.org.

"That they're perfectly holy."

"Drive to Key West, have lunch and come back." He also spends much of his vacation time helping out at a mission in the suburbs of Medellin, Colombia. "Most of what I do is the financial part of it," raising funds in the U.S. to build a church there.

"Road to Cana" by Anne Rice.

"I love to dance so I like the cumbia."

Nativity scenes. Right now he has about 30, including one from Africa. "I never buy any. They've all been given to me and that's how I started collecting them."

"Trying to do anything I can for the mission in Colombia."

Baptizing and celebrating the sacraments for his nephews and nieces.

None, not even on not marrying or having children. Among his parishioners and friends, "I have tons of children and brothers and sisters. â¦ It's a mystery that you can't understand unless you're a priest and you allow yourself to live that mystery."