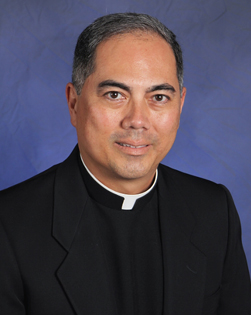 Born April 11, 1963, in Lima, Peru, Father Rodriguez De La Viuda was the second of four children. He attended the Universidad de San Martin de Porres in Lima, where he earned a bachelor's degree in business administration. He worked for a hotel in that city, then moved to Florida 25 years ago. In 1994, he finally acted on longtime spiritual leanings and entered St. John Vianney College Seminary in Miami.He then earned a master's degree in divinity at St. Vincent de Paul Regional Seminary in Boynton Beach and was ordained for the Archdiocese of Miami on May 12, 2001. Before coming to Our Lady Queen of Martyrs in June 2011, he served at St. Rose of Lima in Miami Shores and Good Shepherd in Kendall Lakes. He is also archdiocesan chaplain to the Hermandad del SeÃ±or de los Milagros, a Peruvian-based devotional group that has branches in South Florida.

You were in hotel management before becoming a priest. Why did you switch?

"I didn't consider it a switch. I'm still in hospitality. The essence of hospitality is service. As an ordained priest, I continue practicing hospitality by bringing Christ to others. Hospitality is no longer a business to me but a mission."

"One event that opened my eyes was when I was still in Peru. I decided to join a young adult group that helped Vincentian priests who were evangelizing rural areas in the mountains. I thought you needed to be an accountant or lawyer or businessman to be important in the life of people. That experience opened my eyes to see that the ministry of a priest is basic to the life of communities."

Did it feel strange to enter seminary when you were almost 30?

"Not when I entered. A lot of guys were in my situation, entering the priesthood as a second career. There was a flight attendant, an accountant and a teacher. They'd worked in the secular world and decided later in life to follow the steps of the priesthood."

Did your business training help you as a priest?

"It gave me a lot of tools to be a good administrator. I learned to deal with people one to one."

Was it a shock to come to America and see the difference in the society?

"My first impression was that people who were Catholic were more involved than people in my home country, maybe because we're not the majority here. I especially saw lay people proudly participate in the life of a parish. I never saw that in Peru. There, it's more cultural than actual personal devotion. Now, throughout the years, that continues, but I've also been exposed to the secularism that prevails all over the world. People are very critical of many things, including the Church. "

Hardest part of being a priest:

"What really breaks my heart is when I see people in parishes criticizing the Church. Of course we are allowed to critique constructively. But many people criticize for the sake of criticism."

"Most of what you see in movies and soap operas, especially for Latinos. In most telenovelas, the priest is always a dummy, self-centered. And in American movies, he's usually celebrating a wedding or funeral and he's clueless."

Father Jorge Rodriguez De La Viuda poses at one of the faceted glass windows at Our Lady Queen of Martyrs Church, Fort Lauderdale.

'The Mission,' the movie and the soundtrack. When it came out, I was going on mission work. It made me appreciate the work the Church has done throughout the years. And the music was awesome."

Something most people don't know about him:

"A lot of people don't realize it because my name is very Spanish, but I am also Chinese, on my mother's side. I was raised in a mostly Chinese environment. In Peru, they called me 'El Chino.' But here, people perceive me mostly as Latino."

"I'm very eclectic. When I'm in the office, I listen to classical. I'm also into Celtic and Peruvian music. But I'm not musically inclined. My brothers play every instrument. I only play guitar."

"I have a pyx (a small container to bring Communion to the homebound) that was given to me by Pope Benedict XVI when he was Cardinal Ratzinger. I was visiting Rome, and he learned that I was from Peru. He used to travel a lot to Ecuador and Peru, so we conversed about the Church and Latin America."

"I was working in a mission in Peru and went to a very poor village. I saw the people as suffering people. But they gave us so much love and joy by allowing us to be with them. They became the missionaries to us. We were overwhelmed. It made us better Christians."

"When I finally opted to enter the seminary. I was discerning for many, many years. When I finally said 'This is enough,' and took the plunge, I was very happy that I did it. If I hadn't, I would be still doing fine, but always wondering what if."

"As a priest, it is when I see people either coming back to God, or when I see children who have been formed by their parents in the faith and have an awareness of God."