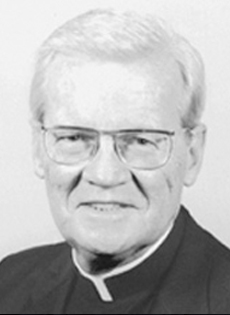 The Brooklyn-born son of first-generation Irish immigrants, Msgr. Reynolds is marking his 80th birthday (Jan. 18, 1925), his 55th year in the priesthood (ordained June 3, 1950 for the Archdiocese of Brooklyn) and his 25th year as pastor of St. Henry, a parish of 1,300, as he puts it, âchronologically-giftedâ families. After the vigil Mass on Saturday nights, Msgr. Reynolds is better-known as the singing and joke-telling emcee of Henryâs Hideaway, a 987-member private club which he describes as âa pastoral experiment to create community.â Msgr. Reynolds came to south Florida in 1966 on the advice of doctors who said it would alleviate his bouts with pleurisy. He holds masterâs degrees in psychological counselling and religious education and was named a monsignor in 1997.

âBaby, babyâ for his trademark line; âgangplank Jimâ for his frequent sailings on cruise ships; âGodâs little bookie,â a moniker he shares with his two long-time secretaries, because âthey help me make reservations for our exciting shows.â

He was an usher at Ebbettâs Field when the Brooklyn Dodgers played there. He sold lamps at Abraham and Strauss, worked in the machine shop at Sperry Gyroscope Co. and worked for a division of the Shell Oil Company in the RCA building in New York. As a seminarian, during summer vacations, he was a lecturer on the Gray Line sightseeing buses in New York City ââuptown in the morning, downtown in the afternoon, Chinatown at night.â He also worked for the Martin Travel Co. in the Empire State Building, escorting tours to Canada.

At age 19 or 20: âI was impressed by the joy that priests seemingly possessed.â Seeing the movie âGoing My Wayâ with Bing Crosby clinched it, as did his work as a tour guide. âIn leading people to exciting locations on earth, I thought I might be able someday to escort people to heaven and manage perhaps to get in through a side door myself.â

âI might be able someday to escort people to heaven and manage perhaps to get in through a side door myself.â

âI save them up and then sail away as a chaplain on a cruise ship.â

His love of the stage:

âI always admired entertainersâ¦ They can get before an audience and touch the hearts and minds of people of all faiths and all races.â

Where he learned to dance the cha cha and the mambo:

âHere at the family of St. Henry. Iâm hoping it will never end.â

âNot taking advantage of the opportunity to learn to play the piano.â

âAs a young priest, having to count the collection. As an old priest, receiving negative rather than constructive criticism.â 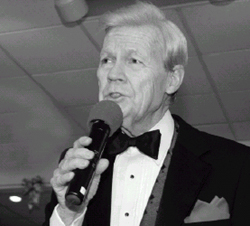 Msgr. James Reynolds performs 28 Saturdays a year at Henryâs Hideaway, his parishâs private club and âpastoral experiment.â His view of life matches that of Mame on Broadway: âLife is a banquet and most darned fools are starving themselves to deathâ¦ St. Peter might say to us, âDid you enjoy the party?â Thereâs no dress rehearsal. This is it. You only go around once.â

âI could sum it up in one word: kindness.â

Founded with Archbishop Emeritus Edward A. McCarthyâs blessing in 1984, the club, located in St. Henryâs parish hall, has a liquor license and books 28 Big Band, Las Vegas and Broadway-style acts each year. He has never had any problems: âPeople seem to be aware that this is a very wholesome, high class, elegant establishment.â

Travelling: He leads two parish trips a year, one to Las Vegas and the other to Hawaii or Europe. He also serves as a chaplain on two cruises a year and takes his parishioners to local theatres to see Broadway shows.

âMy good friend, Father âHappyâ Hoyer because of his cheerful service to his parishâ¦â

He jokes that when he was pastor of St. James in North Miami in the 1970s he increased the number of women religious in the parish school by building a swimming pool. âI worry what St. Peter will say to me: All you did in south Florida was build swimming pools and cocktail lounges.â