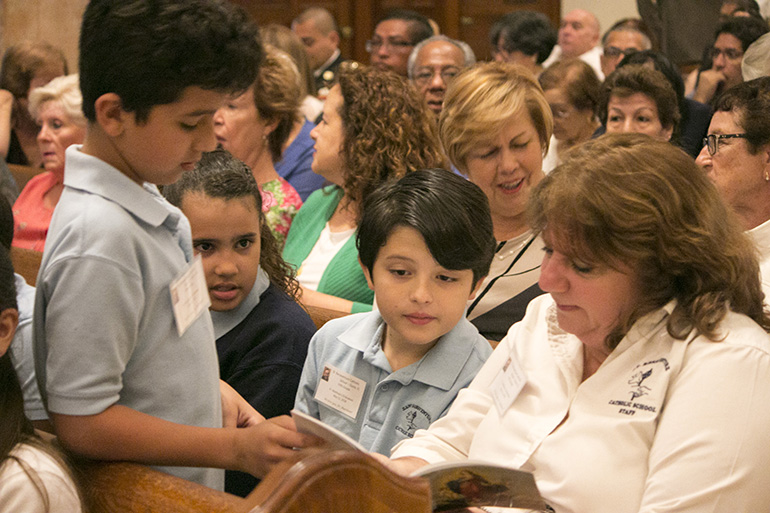 Rosie Di Lella, fifth grade religion teacher at St. Bonaventure School in Davie, sits with some of her students to await the ordination of the seminarian they "adopted," now Father Matthew Gomez. The trip to the ordination was completely voluntary and 18 of her 60 students attended. "They're leaning holy orders," Di Lella said, referring to the fifth grade curriculum which covers the sacraments. "So what better way than hands-on holy orders."

MIAMI | May 12 was a banner day for Hialeah, and for youth and young adult groups.

Three of the men ordained for the archdiocese come from the neighborhood: if not exactly Hialeah, the Hialeah-Miami Lakes area to its north. Two of the men also come from the same parish, Mother of Our Redeemer, located near where N.W. 186th Street meets I-75. 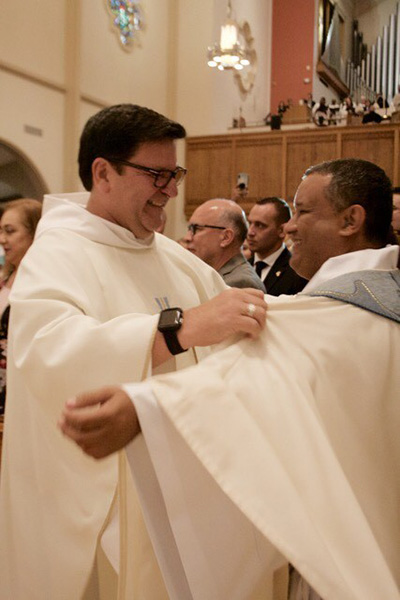 Father Omar Ayubi and Father Gustavo Barros are the second and third priests to be ordained from that parish in the last three years. Father Julio de Jesus was ordained in 2015.

Fathers Barros and De Jesus attribute their vocation to their involvement in Mother of Our Redeemer’s youth group â actually, “grupo de jóvenes” in Spanish, which translates literally into “youth group” but in reality encompassed young adults, as its members were 18 and over.

Father Gomez grew up amidEncuentros Juveniles, also an archdiocesan movement for young people, ages 16 to 23. His parents made the Encuentro and later served as adult advisors, and their sons followed in their footsteps.

So what were they putting in the water at Mother of Our Redeemer back in the early 2000s?

For one thing, said Father De Jesus, it was the largest youth group in the archdiocese at the time, with more than 130 active members. For another, the young people witnessed the example of two special priests: Father Fernando Compaired, Mother of Our Redeemer’s founding pastor (now retired), who started the group, and Father Jimmy Acevedo, the parish’s second pastor, who kept it going strong. He’s now pastor of St. Mark in Southwest Ranches.

“To see his example as a priest and his leading us to Christ at the feet of Jesus,” said Father De Jesus, speaking excitedly after the ordination May 12. “The youth group emphasized praising the Lord and adoration of the Blessed Sacrament.” Members also engaged in service projects.

Involvement in the group not only resulted in several priestly ordinations but also many solid Christian marriages, he noted.

The fourth of the new priests, Father Juan Alberto Gomez, attributes his vocation to attendance at World Youth Day in Toronto. 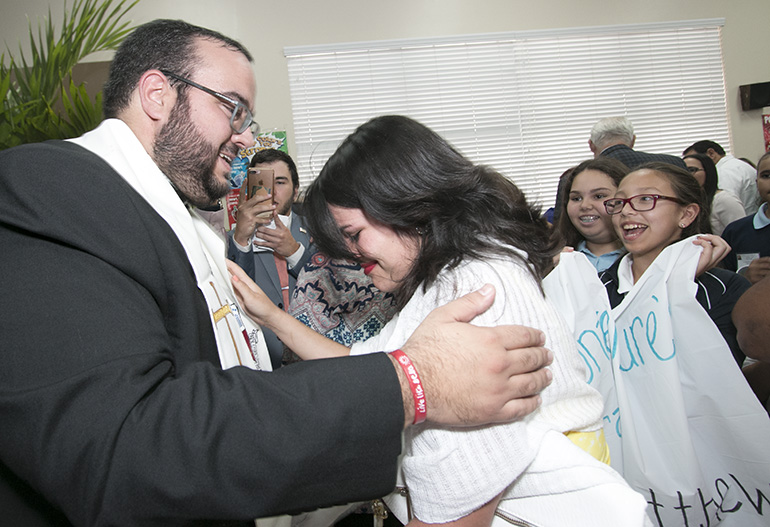 At the cathedral hall after the ceremony, Father Matthew Gomez gives one of his first blessings to Rebecca Garcia, current coordinator of Encuentros Juveniles, as fifth-graders from St. Bonaventure School in Davie, who " adopted" him as a seminarian, cheer nearby.