True discipleship is not always easy or convenient

Archbishop Thomas Wenski preached this homily Oct. 15, 2019, during a Mass with students at the Neocatechumenal Way’s Redemptoris Mater Seminary in Hialeah.

Today the Church celebrates the feast of St. Teresa of Jesus, also known as Teresa of Avila. This Spanish nun lived 500 hundred years ago – she was born 20 years after the arrival of Columbus to the New World and two years after Martin Luther broke the unity of the Church, beginning what is called today the Protestant Reformation.

She is one of only a few women who are given the title doctor of the Church – but she wasn’t a medical doctor. In a real sense she was a spiritual doctor; her teachings about prayer and union with God are still studied today.

Sometimes, she was so absorbed in prayer it seemed like she was going to levitate off the ground. But she also experienced a number of trials. When she set out to reform her order of nuns, the Carmelite Sisters, bringing them back to the simplicity of life that had once characterized them, she got a lot of opposition, not only from her fellow nuns but from a whole lot of other people. Many people just regarded her as a trouble maker.

Sometimes, it’s not easy to live with a saint. And having heard how Jesus dressed down the Pharisees in the Gospel reading today, I think they might say the same thing about Jesus. 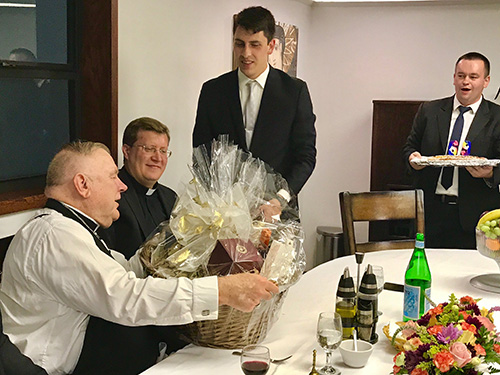 Archbishop Thomas Wenski receives a birthday gift from Redemptoris Mater seminarians after celebrating Mass with them Oct. 12, 2019. The archbishop's birthday is Oct. 18.

One time, the story goes, that St. Teresa – at a particularly difficult time in her life – spent her prayer time complaining to Jesus about the hostility and gossip that surrounded her. And, Jesus answered her. He said, “Teresa, that’s how I treat my friends.” And since praying to Jesus is like talking to a friend, she answered back, “No wonder you have so few of them.”

But since Christ has so few friends, she felt that they should be good ones. To be a friend of Jesus, to be a good friend of Jesus, is more than just following a bunch of rules. That was the problem with the Pharisees – for them religion was about a whole bunch of rules, and they were upset because Jesus didn’t appear to be following them. That’s not to say that rules aren’t important – but to make religion only about following rules would make it too easy. To be friends with Jesus goes beyond just following some rules – rules can make you change your outward behavior; but Jesus wants you to change your hearts – your inner attitudes, your inner motivations. Rules can’t do that; but love – the love we have for that friend Jesus can.

Jesus upsets the powers that be and you know the rest of the story – he is eventually crucified. Teresa of Jesus upset the powers that be of her time – and while she wasn’t physically crucified, she did experience a “crucifixion” of sorts – one that comes from rejection, criticism, gossip. One way or another, discipleship has a cost. To follow Jesus isn’t always easy – because Jesus takes us to the narrow way, not to “easy street.”

“No wonder,” as Teresa said, that Jesus has so few friends.

It is important that we recognize how different the Jesus of the Gospel, the Jesus whom Teresa encountered in her prayer, is from the image of Christ that prevails in our culture today. Today, the popular image of Jesus is of a Jesus who demands nothing, who never scolds, who accepts everyone and everything – a Jesus who no longer does anything but affirm us.

As a great theologian – who was once known as Cardinal Ratzinger – once said, “The Jesus that makes everything okay for everybody is a phantom, a dream, and not a real figure.” The Jesus of the Gospels, the Jesus that the Catholic Church preaches, is by contrast demanding and bold. If he was really accepting and tolerant of all things and toward all people, do you think he would have ended up murdered on a cross? And, if Teresa just went along with the crowd, she wouldn’t have experienced so much hostility just for doing good.

Jesus and Teresa were not “people pleasers” – and we all know them – who in trying to make everybody happy end up making no one happy. Avoiding conflicts does not solve anything – and yet that’s what many people try to do. And they inevitably end up frustrating themselves and others.

As the long history of the saints and holy martyrs, saints like Teresa of Avila, shows so well, the Gospel of Jesus Christ is not always “convenient” for us in its boldness and its demands. And, today, we who make up the Church of Christ, if we are to be the effective presence of Christ in the world today, cannot be ashamed or afraid of the very real demands of discipleship that Jesus boldly makes on those who would be his followers.

Those demands of discipleship will increasingly put us in conflict with the culture that surrounds us. If we are to be faithful to Christ and his teachings we will have, as Pope Francis says, to swim against the tide – the tide of relativism that is changing the way our contemporaries understand sex and marriage, the dignity of human life at its very beginnings and its end.

The demands of discipleship pertain to all of us who are baptized. In the first reading, St. Paul tells the Romans, “I am not ashamed of the Gospel.” Neither should you be.

May you never be ashamed, and may you never be afraid to walk with Jesus, as his friend. Since you are among those few friends of Jesus, make sure to be “good” friends – not false or half-hearted friends. 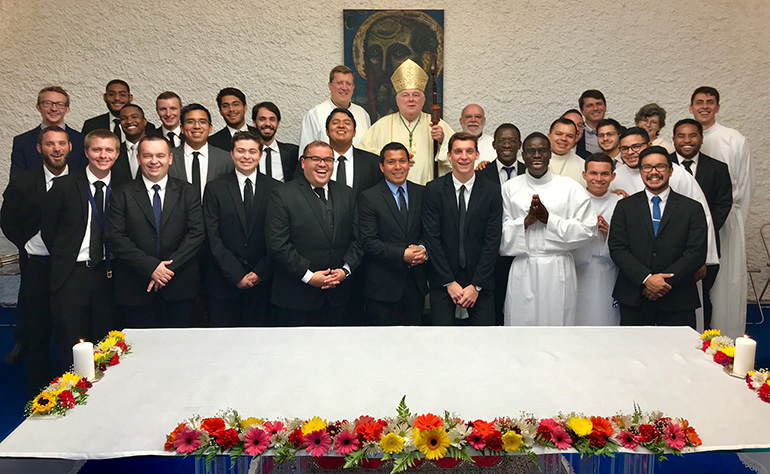 Archbishop Thomas Wenski with seminarians from Redemptoris Mater Seminary in Hialeah, after celebrating Mass with them Oct. 12, 2019.