Let us imitate the Santo Niño in his humility

Archbishop Wenski's homily at Mass with Filipino community on Sinulog

Archbishop Thomas Wenski preached this homily Jan. 19, 2020, while celebrating Mass with the Filipino community at St. Bernard Parish in Sunrise, on the celebration of Sinulog in honor of Santo Niño. 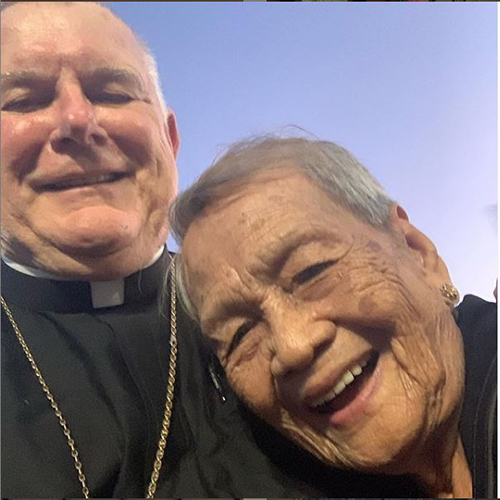 “Pit Senyor!” Today, the third Sunday of January, the Filipino nation celebrates Sinulog. This a special feast for the people of Cebu – but not only just for Cebuanos. From the time of Queen Juana until today, the Santo Niño continues to reveal his glory to all Pinoy and Pinay so that you grow in your appreciation of the gift of faith, first received by Queen Juana. May this celebration of Sinalog deepen our relationship with God and strengthen our commitment to sharing the faith with others as missionary disciples as we approach the 500th anniversary of Christianity’s arrival to the Philippines.

This year’s theme is: Señor Santo Niño: Cause of Our Unity and Charity. And so, we pray today that unity and charity be expressed through solidarity – especially towards those who have been displaced because of the eruption of the Taal volcano.

This is a beautiful celebration – in a way, it extends for us the feast of Christmas when we celebrate that our Savior and Redeemer became a “little Child” precisely to save us and to introduce us to the intimacy of his family, which is the life of the Most Holy Trinity. He became one like us so that we could become like him.

In the Gospel, the disciples asked him what they must do to become great in the Kingdom of God. His answer had to surprise them – because children did not enjoy the status that we accord them today. We love to spoil our kids. If you don’t think so just remember all those toys you bought for your kids for Christmas. Some of those toys are already forgotten by them. In Jesus’ time, most of his contemporaries followed the axiom, “spare the rod and spoil the child.” And back then there was no DCF that would investigate parents if they used the rod too generously.

Yet, Jesus put that little child before them and said, “Amen, I say to you, unless you turn and become like children, you will not enter the kingdom of heaven.” And, if he said it to his disciples, he probably means to say the same thing to us today. 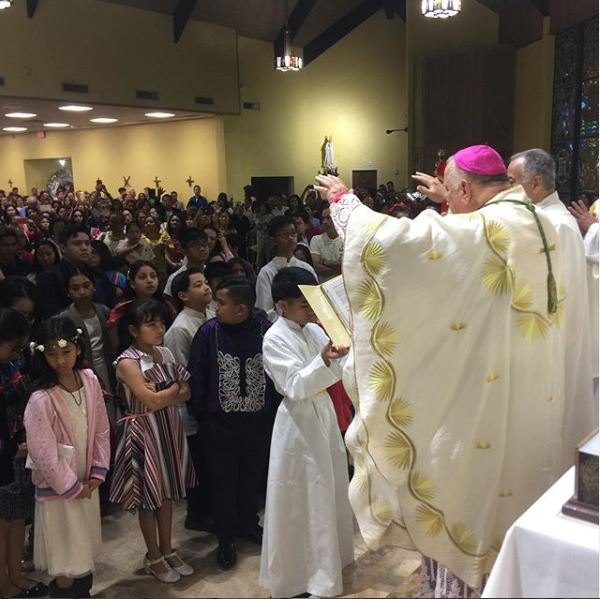 Archbishop Thomas Wenski celebrates Santo Niño Mass at St. Bernard Church in Sunrise, Jan. 19, 2020. Devotion to Senyor Santo Niño is very popular in the Philippines, especially among people in Cebu province. It is celebrated every third Sunday of January.

Jesus is trying to make an important point – and drives it home with this example. He wants to remind us that the way things are valued in this world is not necessarily how they are valued in his kingdom. We do want to feel important, and we want to feel valued – and that’s what drives most of us to succeed in school and in our workplaces. We live in a very competitive society: it is dog eat dog out there; and to succeed, it seems that we must be the meanest dog. The world tells us, nice guys finish last.

Jesus tells us something different. Yes, it’s good to be important; but it’s more important to be good. Now what’s so great about becoming like a little child? We can romanticize this and talk about the innocence, the purity, the sincerity of little children. And we know that our own kids are always innocent and sincere. Right? It’s those other kids that are mean and manipulative.

But Jesus is not talking about children’s innocence or purity; he is talking about their humility, their lowliness. Again, children in Jesus’ time lived in humble circumstances and so they weren’t about feeling themselves important or powerful. After all, they were looked down upon; they are short people, so they have no illusions about being “the greatest” anywhere. So, while the disciples wanted to know what they have to do to become “great,” children are not worried so much about that, which is why Jesus put that little child in front of them and told them to be humble like they are.

There is something more important to children than being considered a great person or a ruler over others. They were then, and they are today, more concerned about feeling themselves loved and protected by their parents. To be with mom or dad, to be with someone they can trust, is what concerns them. As “short people” recognize their powerlessness, they know instinctively that they cannot live unless there is a parent or someone that they can trust. They place themselves in their parents’ hands, that’s all they are looking for.

Now that child in front of Jesus most likely was not interested in the question, who is greatest. He was not seeking any rewards or making any claims for following Jesus. If the parents are there, that is enough for him, he is satisfied. And here is the lesson that Jesus wanted to give: unless we can be satisfied with just being in God’s mercy and under God’s rule, we cannot say that we are like little children. If we have thoughts of wanting to make demands from God and from others for expected rewards for what we have done, we cannot say we are like little children.

We must have a change of heart at that level and change directions, otherwise we will not be satisfied with the kingdom of God.

Jesus also says, “Whoever receives a child like this one on behalf of my name is receiving me.” What does this mean? If it was about accepting someone who is easy to accept, he would not have had to have said this – and so, this verse is also about accepting the hard-to-accept person. A little child is dependent, he or she requires care. Kids can create a burden, they are certainly great responsibilities. How many children are not allowed to be born because their unexpected arrival was deemed to be too “inconvenient”?

This beautiful devotion of the Filipino people reminds us of the humility of Christ, the Santo Niño; and this devotion points out to us the path that we should follow. We dance the sinalog as an expression of our willingness to walk humbly with our Lord.

Our Lord’s humility is what makes him accessible to us – and when we are humble, we become accessible to others, especially those most vulnerable, those most in need. It’s a lesson we need to appropriate lest we, in seeking to be important, forget how to be good.

Today, many people live far away from God. Sometimes, they stay away from God because they are afraid of God. Many people have an erroneous idea about God – that he is a hard taskmaster, someone who is waiting for them to do wrong so that he can punish them. Oftentimes, people who have not had an experience of a loving father at home have a hard time understanding that God is a loving and merciful Father. And so, they keep their distance. But, in Jesus Christ, God became small; he became a little Child; the Santo Niño reminds us that we do not need to be afraid of God.

Other people are angry with God. They blame him for the woes that they suffer, making him responsible for all that goes wrong in their lives. But God became a little child – who can be angry with a little child?

The Santo Niño devotion is a beautiful expression of the popular religiosity of the Filipino people. Let us imitate the Santo Niño in his humility, a humility seen in little children everywhere, and place ourselves under God’s rule and entrust ourselves to his mercy.

Other News from St. Bernard Church