VATICAN CITY | The Vatican’s Secretary of State has asked papal representatives to share with bishops some clarifications regarding comments on civil unions made by Pope Francis in a recently released documentary.

The clarifications explain that the pope’s comments do not pertain to Catholic doctrine regarding the nature of marriage as a union between one man and one woman, but to provisions of civil law.

“The Holy Father has directed that these observations be offered in order to permit an adequate understanding of his words,” wrote Archbishop Christophe Pierre, apostolic nuncio to the U.S., in a letter to Archbishop Jose Gomez, president of the U.S. Conference of Catholic Bishops, dated Oct. 30, 2020.

The Vatican's clarification explains that in a 2019 interview, unpublished parts of which were aired in director Evgeny Afineevesky's documentary, "Francesco", the pope commented at different times on two distinct issues: that children should not be ostracized from their families because of their sexual orientation; and on civil unions, amid discussion of a 2010 same-sex marriage bill in the Argentine legislature, which Pope Francis, who was then archbishop of Buenos Aires, opposed. 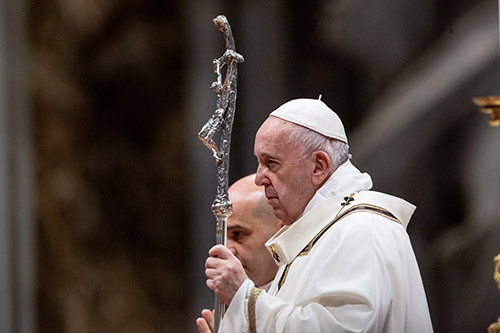 Pope Francis is pictured here during services in Rome on the feast of the Epiphany in January 2020.

The interview question that prompted the remark on civil unions “pertained rather to a local law of ten years ago in Argentina regarding ‘equal marriages of same-sex couples’ and the opposition of the then Archbishop of Buenos Aires towards it. In this respect, Pope Francis affirmed that ‘it is an incongruity to speak of homosexual marriage,’ adding that, in such a precise context, he had spoken of the right of these people to legal cover: ‘what we have to do is a law of civil union; they have the right to be covered legally. I defended that,’” the Vatican statement says.

It quotes Pope Francis as saying, during a 2014 interview: "Marriage is between a man and a woman. Secular States want to justify civil unions in order to regularize the various situations of cohabitation, driven by the necessity to regularize economic matters between persons, such as ensuring health care, for example. This relates to various forms of cohabitation agreements, which I would not be able to list. The different situations must be examined and evaluated, according to their circumstances."

"It is therefore clear that Pope Francis was referring to particular State provisions, and not certainly to the doctrine of the Church, which has been reiterated on numerous occasions over the years,” the statement says.

The Secretariat of State’s statement is consistent with recent public statements from two Argentine bishops: Archbishop Hector Aguer and Archbishop Victor Manuel Fernandez, the emeritus and current archbishops of La Plata, Argentina, and with additional reporting on the context of the pope's remarks.

On Oct. 21, 2020, Archbishop Fernandez posted on Facebook that before he became pope, then-Cardinal Bergoglio “always recognized that, without calling it ‘marriage,’ in fact there are very close unions between people of the same sex, which do not in themselves imply sexual relations, but a very intense and stable alliance.”

“They know each other thoroughly, they share the same roof for many years, they take care of each other, they sacrifice for each other. Then it may happen that they prefer that in an extreme case or illness they do not consult their relatives, but that person who knows their intentions in depth. And for the same reason they prefer that it be that person who inherits all their assets, etc.”

“This can be contemplated in the law and is called ‘civil union’ [unión civil] or ‘law of civil coexistence’ [ley de convivencia civil], not marriage.”

“What the Pope has said on this subject is what he also maintained when he was the archbishop of Buenos Aires,” Archbishop Fernández added.

“For him, the expression ‘marriage’ has a precise meaning and only applies to a stable union between a man and a woman open to communicating life ... there is a word, ‘marriage,’ that only applies to that reality. Any other similar union requires another name,” the archbishop explained.

Last week, Archbishop Aguer told ACI Prensa that in 2010, “Cardinal Bergoglio, then being the archbishop of Buenos Aires, proposed in a plenary assembly of the Argentine bishops’ conference to support the legality of civil unions of homosexual persons by the state, as a possible alternative to what was called — and is called — 'marriage equality.'”

“At that time, the argument against him was that it was not a merely political or sociological question, but that it involved a moral judgment; consequently, the sanction of civil laws contrary to the natural order cannot be promoted. It was also noted that this teaching has been repeatedly stated in the documents of the Second Vatican Council. The plenary of the Argentine bishops rejected that proposal and voted against it,” Aguer said.

America Magazine published Oct. 24, 2020 the apparent context of the pope’s remark on civil unions — unedited footage of a long television interview with Pope Francis made by Valentina Alazraki, a reporter for Mexico’s Televisa, in May 2019.

During a discussion on the pope’s opposition to a same-sex marriage proposal when he was an archbishop in Argentina, Alazraki asked Pope Francis if he had adopted more liberal positions after becoming pope, and if so, whether that was attributable to the Holy Spirit.

Alazraki asked: “You waged a whole battle over egalitarian weddings, of couples of the same sex in Argentina. And later they say that you arrived here, they elected you pope and you appeared much more liberal than what you were in Argentina. Do you recognize yourself in this description that some people who knew you before make, and was it the grace of the Holy Spirit that gave you a boost? (laughs)”

According to America Magazine, the pope responded that: “The grace of the Holy Spirit certainly exists. I have always defended the doctrine. And it is curious that in the law on homosexual marriage.... It is an incongruity to speak of homosexual marriage. But what we have to have is a law of civil union (ley de convivencia civil), so they have the right to be legally covered.”

The last sentence was omitted when Alazraki's interview was broadcast in 2019.

The Secretariat of State's statement seems to confirm that the pope said, “I stood up for that,” immediately after his other remarks on civil unions, a fact which had not previously been made clear.

Gustavo - 11/02/2020 11:44 PM
Whether it's called a "civil union," a non-religious "civil marriage," it's still the same thing: a state recognition of a "union" that is contrary to nature and, therefore, inexistent before God and nature. Pray for the Pope's conversion.