VATICAN CITY | The Congregation for the Doctrine of the Faith has issued a manual to help bishops and dioceses follow Church procedure in respect to accusations of sexual abuse of a minor by a cleric.

The vademecum, released July 16, 2020, is one of the last documents promised by the Vatican following its February 2019 abuse summit.

The handbook does not issue new norms or make alterations to current Church law, but is intended as a guide for bishops, dioceses, and religious communities on how to follow Church procedure in sex abuse cases. 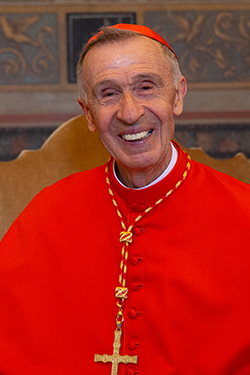 Cardinal Luis Ladaria Ferrer, prefect of the Congregation for the Doctrine of the Faith.

Abuse of a minor by a cleric is considered by the Church to be a grave delict (graviora delicta), or crime. The disciplinary measures for grave delicts are the competence of the CDF.

According to the vademecum’s introduction, “the present manual is meant to serve as a handbook for those charged with ascertaining the truth in such criminal cases, leading them step-by-step from the notitia criminis (notice that a crime is alleged to have occurred) to the definitive conclusion of the case.”

The introduction states that use of the manual is encouraged “since a standardized praxis will contribute to a better administration of justice.”

It also covers what the CDF can be expected to do after receiving the information from the preliminary investigation, called “acts,” as well as listing the possible outcomes of a case.

Cardinal Luis Ladaria Ferrer, CDF prefect, said that “the course of justice cannot alone exhaust the Church’s response, but it is necessary in order to come to the truth of the facts.”

He said the handbook was a “tool” and indicated that updates and adaptations should be expected as developments to canon law and new challenges require.

The handbook references the Code of Canon Law, Substantive Norms, and procedural norms regarding crimes, as well as Vos estis lux mundi, which was promulgated by Pope Francis in 2019, and established the so-called “metropolitan model” for the investigation of accusations against bishops and their equivalents.

“It is hoped that this handbook will assist Dioceses, Institutes of Consecrated Life and Societies of Apostolic Life, Episcopal Conferences and the various ecclesiastical circumscriptions to better understand and implement the requirements of justice regarding a delictum gravius that constitutes for the whole Church a profound and painful wound that cries out for healing,” the manual states.

The request for this tool was made during the global Meeting of the Presidents of the Episcopal Conferences on the Protection of Minors held in the Vatican in February 2019. This edition of the vademecum is identified as version “1.0” since periodic updates are foreseen as the normative texts or praxis in the CDF is modified.

What constitutes a crime? How does the preliminary investigation take place? What are the possible penal procedures? These are some of the specific questions answered precisely with continual reference to the current Code of Canon Law, the Motu proprio Sacramentorum Sanctitatis Tutela issued by Pope John Paul II in 2001 and updated by Pope Benedict XVI in 2010, as well as to the more recent Motu proprio Vos estis lux mundi, issued by Pope Francis in 2019.

In addition, in some cases, the vademecum specifies the differences between the Code of Canons of the Eastern Churches and the Code of Canon Law for the Latin Church. For example, in the case of the procedure for conducting an extrajudicial (or administrative) trial, which abbreviates and accelerates the judicial process while maintaining the guarantee of a fair trial, the Latin Church does not require that a Promoter of Justice be appointed, whereas this is obligatory in the Eastern Churches.

WELCOMING, LISTENING TO THE ABUSED

There are four particular areas that the vademecum identifies. Protection of the person comes first. The ecclesiastical authorities are to ”ensure that the alleged victim and his or her family are treated with dignity and respect.”

They are to be offered “welcome, attentive hearing and support, also through specific services, as well as spiritual, medical and psychological help, as required by the specific case.”

“The same,” the manual continues, “can be done with regard to the accused.” It also recalls the importance of defending “the good name of the persons involved." In the case of protecting the common good, the vademecum underlines that providing information regarding an accusation does not “constitute a violation of one’s good name."

RIGHTS OF THE ACCUSED

Even if the “commission of the delict is manifestly evident," the accused must always be guaranteed the right to self-defense. At the same time, as chapter 9 states, from the moment that there is a notification of a possible crime, “the accused has the right to present a petition to be dispensed from all the obligations connected with the clerical state, including celibacy, and, concurrently, from any religious vows.”

This request is presented in writing to the pope through the CDF. However, while the accused can present an appeal in either the penal or administrative processes, the decision of the Supreme Pontiff is final.

A second aspect that emerges from the vademecum is the need to scrupulously and accurately verify all the information received by a bishop regarding an alleged case of abuse. Even if there has not been a formal complaint, even if the news was first published via the mass media (social media included), even if the source is anonymous, the vademecum suggests the attentive evaluation of any type of information received.

The seal of confession, naturally, remains valid. In this case, the confessor must try to convince the penitent to provide the information of the alleged abuse in another way.

A third aspect covers communication. A few times, the vademecum brings up the obligation to respect “secret of office." It also stresses that, during the preliminary investigation, the alleged victim and witnesses have no ”obligation of silence about the allegations."

It does ask that “the inappropriate or illicit diffusion of information to the public” be avoided, especially in the preliminary investigative phase so as not to give the impression that the facts are valid. At the same time, it explains that, should documents be sequestered or if the civil authority orders that documents be handed over, the Church cannot guarantee confidentiality over documents acquired by third parties in this way.

One paragraph focuses on public notifications that must be made during the preliminary investigation. In these cases, it recommends caution and the use of “brief and concise” statements, without “clamorous announcements” or apologizing on behalf of the Church so as not to anticipate judgment regarding the facts.

COLLABORATION BETWEEN CHURCH AND STATE

The importance of collaboration between the Church and state is a fourth aspect covered in the vademecum. It brings up, for example, that “even in cases where there is no explicit legal obligation to do so, the ecclesiastical authorities should make a report to the competent civil authorities if this is considered necessary to protect the person involved or other minors from the danger of further criminal acts.”

In addition, it reiterates that “the investigation should be carried out with respect for the civil laws of each state."

AVOIDING THE TRANSFER OF CLERICS

Finally, other particular indications are given. The first regards precautionary measures. These are not a punishment, but rather are an administrative act that can be imposed at the beginning of the preliminary investigation to protect both the good name of the persons involved and the public good, to avoid scandal, the covering up of evidence, or possible threats to the alleged victim.

Once the reason for such precautionary measures no longer exists or the process has concluded, they can be revoked. However, the vademecum recommends the use of “prudence and discernment” in this area.

A second indication involves the use of the terminology “suspensio a divinis” to indicate the prohibition of the exercise of the priestly ministry imposed as a precautionary measure. The vademecum suggests that this term be avoided in the preliminary investigation phase since such a penalty “cannot yet be imposed at this stage.”

Rather, it recommends the use of the term “prohibition from the exercise of the ministry." During the preliminary investigation phase, the transfer of the priest involved is always to be avoided.

The full text of the Vademecum can be found by clicking here.

Vatican News contributed to this report.