VATICAN CITY | The Vatican’s Secretariat of State has published a report on Theodore McCarrick, saying that the Holy See had received inaccurate information about McCarrick from three New Jersey bishops before McCarrick’s 2001 appointment as Archbishop of Washington.

The false information presented by those bishops might have been instrumental in assuring McCarrick's appointment as Washington's archbishop, and as a member of the College of Cardinals.

Pope Francis first announced an internal Vatican investigation into the career of McCarrick in October 2018. The results of that investigation were released Nov. 10, 2020.

The report notes that allegations about McCarrick had been sent by Cardinal John O’Connor, then the archbishop of New York, to apostolic nuncio Archbishop Gabriel Montalvo in a letter on Oct. 28, 1999. That letter was subsequently shared with John Paul II, the report states.

In response to those allegations, at the request of John Paul II, letters were sent to Bishops Vincent Breen and Edward Hughes of Metuchen, and Bishop John Smith of Trenton on May 12, 2000, asking for the truth about McCarrick. Bishop James McHugh of Rockville Centre was contacted separately about the same question. 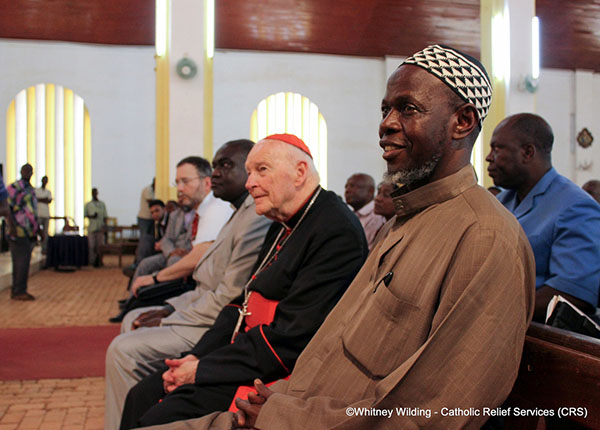 In this file photo from April 8, 2014, then-Cardinal Theodore McCarrick is shown visiting Bangui, in the Central African Republic, to discuss possible solutions to ending violence in that nation. He resigned from the College of Cardinals after it emerged in June 2018 that he had been credibly accused of sexually assaulting a minor. Allegations of serial sexual abuse of minors, seminarians, and priests soon followed, and McCarrick was laicized in February 2019.

The letter of Bishop Hughes, who succeeded McCarrick in Metuchen, told the Holy See that: "I have no factual information that would clearly indicate any moral weakness on the part of Archbishop McCarrick."

Bishop Hughes' letter dismissed the accounts of some priests who had reported to him being molested or abused by McCarrick, even when, in one case, a psychologist affirmed that the priest had been McCarrick's victim. Bishop Hughes noted moral lapses on the part of the priests accusing McCarrick while dismissing their claims against the archbishop.

In fact, the bishop's letter did not mention at all some incidents of sexual abuse or coercion that had been reported to him by Metuchen priests, according to the report.

Bishop Smith, who had been an auxiliary bishop in Newark, told the nuncio that “I have never heard anyone make a substantiated accusation of immoral behavior against Archbishop McCarrick nor have I any evidence of ‘serious moral weakness' shown by Archbishop McCarrick.’”

But according to the report, Bishop Smith himself had in 1990 witnessed McCarrick groping the groin of a young cleric during a dinner with several officials from the Archdiocese of Newark. Bishop Smith's letter made no mention of that incident.

Bishop McHugh, then auxiliary bishop of Newark, was present at the same 1990 dinner and also saw the groping, but he wrote in his letter that he "never witnessed any improper behavior on the part of Archbishop McCarrick."

The misinformation presented by those bishops was accepted as true by Archbishop Montalvo, and part of what may have informed Pope John Paul II’s decision to appoint McCarrick the Archbishop of Washington in November 2000, the report explained.

The report portrays McCarrick as a cunning personality, adept at establishing contacts with influential political and religious leaders.

It confirmed that he cultivated relations with teenage boys and young men, referring to them as his "nephews" and asking them to call him "Uncle." Some of the "nephews" would share a bed with McCarrick during trips and attend dinners at the bishop's residence in Metuchen, New Jersey, and later at his beach houses in New Jersey. Those nephews included seminarians who report being coerced and compelled to share a bed with McCarrick, along with incidents of touching, harassment, and sexual contact by the former cardinal.

The report explained that the Holy See, along with several U.S. bishops and the bishops' conference, had received anonymous complaints against McCarrick in the early 1990s. Those were investigated by Cardinal O'Connor in connection with a possible papal visit to Newark, who judged that allegations McCarrick was inappropriate with adults would not present an issue if the pope were to visit Newark.

In 1994, Mother Mary Quentin, superior of the Religious Sisters of Mercy of Alma, contacted the apostolic nuncio, Archbishop Agostino Cacciavillan, to say that a priest had told her McCarrick had acted inappropriately with seminarians. Mother Quentin offered to put the nuncio in touch with the priest.

After talking to the priest, Archbishop Cacciavillan contacted Washington Archbishop Cardinal James Hickey, who defended McCarrick. The nuncio concluded that the allegations were "possible slander" and that Mother Quentin had reported them because “she wanted to make herself appear important.”

The matter was not investigated further.

In 1997, Dr. Richard Fitzgibbons, a psychologist, reported to the Vatican's Congregation for Bishops that a priest he had treated had been the victim of "sexual trauma" perpetrated by McCarrick. That allegation was apparently not investigated.

Cardinal O'Connor raised concerns about McCarrick in 1999, which led to Archbishop Montalvo's questions to Hughes, Smith, and McHugh. Their letters of endorsement for McCarrick seem to have carried considerable weight in Rome, the report makes clear, especially after endorsement from Cardinals Hickey and Adam Maida, as well as support from Bishop George Murry of St. Thomas in the Virgin Islands.

The report says that on three occasions, prospective transfers of McCarrick to other U.S. dioceses were stopped: to Chicago in 1997, to New York in 1999 and 2000, and to Washington in July 2000. In November 2000, after the letters from the New Jersey bishops, McCarrick's transfer to Washington was carried out.

About three months before the appointment, Pope John Paul II had received a letter from McCarrick through his personal secretary, Bishop Stanislaw Dziwisz. In the August 2000 letter, McCarrick denied Cardinal O'Connor's accusations against him and declared he had never had sexual relations with anyone, while stating he would "do whatever the Holy Father asked of me."

The letter convinced John Paul II that McCarrick was telling the truth, the report states. A footnote in the report also notes that people close to the pope said he was inclined to believe allegations of sexual misconduct against clerics were false, based on his experience in communist Poland, "where rumors and innuendo had been used to damage the reputations of Church leaders."

After that letter, McCarrick became Archbishop of Washington, and a cardinal.

McCarrick was ordained a priest in 1958 and auxiliary bishop in the Archdiocese of New York in 1977. He became Bishop of Metuchen, New Jersey, in 1981 then Archbishop of Newark in 1986, and then in 2001 Archbishop of Washington, DC, where he retired in 2006.

He became a cardinal in 2001 but resigned from the College of Cardinals after it emerged in June 2018 that he had been credibly accused of sexually assaulting a minor. Allegations of serial sexual abuse of minors, seminarians, and priests soon followed, and McCarrick was laicized in February 2019.

In addition to tracing McCarrick's career, the report says that Archbishop Carlo Maria Viganò, who called for Pope Francis to resign over his handling of McCarrick in 2018, failed in 2012 to follow instructions to investigate allegations against McCarrick.

According to the report, Archbishop Viganò wrote to Cardinal Marc Ouellet, prefect of the Congregation for Bishops, in 2012, informing him of a lawsuit against McCarrick by a cleric identified in the report as "Priest 3." The report said that Cardinal Ouellet instructed Archbishop Viganò, who was then nuncio the U.S., to investigate whether the claim was credible but Viganò “did not take these steps.”

The report also touched on McCarrick's fundraising and habit of giving cash gifts to Church officials, which it said took place "over at least four decades."

It said: "Overall, the record appears to show that although McCarrick’s fundraising skills were weighed heavily, they were not determinative with respect to major decisions made relating to McCarrick, including his appointment to Washington in 2000. In addition, the examination did not reveal evidence that McCarrick’s customary gift-giving and donations impacted significant decisions made by the Holy See regarding McCarrick during any period."

A footnote in the report discussed McCarrick's association with Cardinal Kevin Farrell, prefect of the Vatican Dicastery for the Laity, Family, and Life since 2016. Cardinal Farrell lived with McCarrick from 2002 to 2006, when Cardinal Farrell was auxiliary bishop, vicar general, and moderator of the curia in the Washington archdiocese.

The footnote said: "In an interview, Cardinal Farrell stated that, during his time as Vicar General in the Archdiocese of Washington, he occasionally heard 'old rumors' about McCarrick having shared a bed with seminarians at a beach house when McCarrick was a bishop in New Jersey. Cardinal Farrell noted that the rumors were not about sexual activity and 'didn’t ever relate to minors.'"

"Farrell only learned of the civil settlements involving McCarrick 'through the priest grapevine' in 2007 or 2008, after Farrell had already been installed as the Bishop of Dallas. Farrell stated that it was 'an absolute shock' to learn in 2018 that there had been a credible allegation in New York that McCarrick had abused a minor."

"With respect to McCarrick’s conduct during the years he was Archbishop of Washington, Cardinal Farrell stated he 'never saw or heard, ever, of any sharing of a bed, of any involvement with anybody, or anything of that nature, whether at the residence or elsewhere.' He said that he 'never suspected, or ever had reason to suspect, any inappropriate conduct by McCarrick in Washington.'”

In a July 2018 interview, Farrell said he was "shocked" by revelations of abuse against McCarrick. “I was shocked, overwhelmed; I never heard any of this before in the six years I was there with him,” he said.

Included in the report is testimony from a woman from the New York area, identified in the report as "Mother 1," who said she sent in the mid-1980s anonymous letters to members of the Church hierarchy about McCarrick's behavior with minors.

The report says no originals or copies of the letters were located in the Vatican, the U.S. nunciature, or the Archdiocese of New York, and no references to the letters were found in any documentation.

In interviews for the report, the woman told the Holy See, she met McCarrick in the early 1970s, and he became a frequent visitor to her family's home.

"Mother 1" reported sensing McCarrick "had a strange interest in boys" and that she witnessed him touching them in inappropriate ways, such as on their inner thighs, or rubbing her son's chest.

In an interview, she said "the first time I had a conflict with [McCarrick] was when one of my sons was going to the first dance of his freshman year [in high school]. And Ted did not want him to go to the dance, insisting that my son 'owed him' and that he should go away on a weekend trip with Ted."

According to the report, the woman said McCarrick introduced her sons to alcohol on overnight trips.

"Mother 1" stated that she felt McCarrick posed a danger, but because of his position, and the ways McCarrick gave favors and made people feel special, she was worried about retaliation for reporting him.

In the mid-1980s, the woman wrote a letter warning Church hierarchy about McCarrick's behavior with children, the report states. She sent handwritten identical copies of the letter to each of the U.S. cardinals and to the papal nuncio.