The Spanish-style home of St. Philip Neri Church was dedicated in 1952, nearly six years before the diocese itself was established.

The bell tower has a real bell, operated with a pull handle.

Terracotta bas-relief of Mary and Jesus is framed in coral.

St. Philip Neri Church was closed during the 2009 reorganization of the archdiocese, then reopened two years later on members' request.

The central crucifix has a terrazzo background.

St. Philip Neri presides solemnly in the rose window at the front of the church. In real life, he was said to be much cheerier.

Clerestory windows on one wall depict Old Testament texts. This one illustrates Isaiah 11:6: "The wolf also shall dwell with the lamb."

Jeremiah was called the "weeping prophet," for his tearful cries for Israel to return to God.

The Messiah, symbolized as a lamb, takes up his reign in Jerusalem.

Mene, Mene, Tekel, Peres, writes a hand on the wall of a Babylonian palace - God's decree that the king's reign was finished.

On the opposite wall, the clerestory windows illustrate the Four Evangelists, who wrote the books of the Gospel. St. Matthew here is represented as a winged man . . .

Statuette of St. Martin de Porres stands on the chancel at St. Philip Neri Church. The statuette is also used for the annual Masses of the archdiocese's black Catholics.

A Chi-Rho, a monogram for Jesus, sheds water in this window at St. Philip Neri Church.

A painting in the parish hall depicts Mary as a loving African mother.

Meditation garden is sheltered by one of many enormous live oaks on the grounds at St. Philip Neri.

MIAMI GARDENS | No one ever broke St. Philip Neri’s heart, but his heart apparently broke his chest.

On Pentecost Day 1544, Neri said, a globe of fire entered his mouth and expanded his heart. He was filled with such joy that he collapsed and cried out: “Enough, enough, Lord, I can bear no more!”

He later felt a lump on his chest about the size of a fist, though without pain. After his death, doctors found two ribs had broken – arched outward – above his heart. 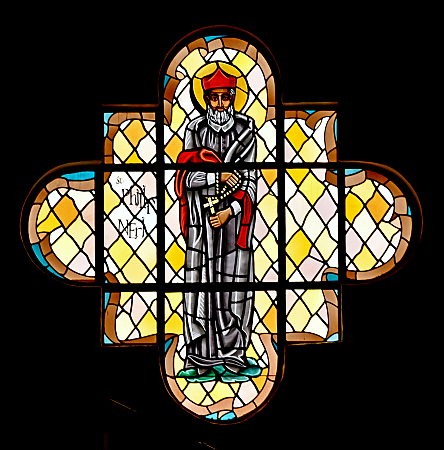 St. Philip Neri presides solemnly in the rose window at the front of the church. In real life, he was said to be much cheerier.

The mystical episode may startle those who know Neri as the “laughing saint” or the patron saint of joy. He did cultivate a taste for pranks and jokes, plus a cheerful self-deprecation. But beneath the laughter lived an ecstatic love for God and a delight in bringing others to him.

As he famously said: “A heart filled with joy is more easily made perfect than one that is sad.”

Born in 1515, “Good Pippo,” as he was dubbed, showed spiritual depth even as one of four children in Florence, Italy. He enjoyed praying, hearing the Bible and reciting the Psalms.

He received his early education from friars at a nearby Dominican monastery. As a young man he worked for two years with a wealthy relative in San Germano, learning so well that the man planned to leave the family business to him.

But while praying at a mountain chapel, Neri discerned his calling: as a missionary to Rome, which was then in need of revival.

In Rome, he earned room and board as a tutor for two boys. He developed an ascetic lifestyle, praying and living on small meals of bread, water and vegetables. He studied theology and philosophy at local schools – then abruptly left, sold his books and took to the streets.

Speaking in public squares, Neri’s friendly style encouraged conversation and group prayers. A common challenge: “Well, brothers, when shall we begin to do good?”

He gradually gathered a group of young men who shared his service ethic and quest for spirituality. He often led them to visit the poor in hospitals, and to pray at the Seven Pilgrim Churches in Rome. He also organized picnics for teenagers of Rome, with food and music. 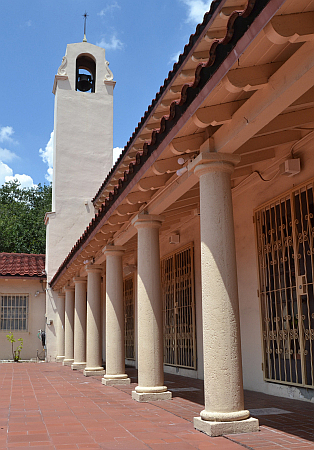 In 1548 Neri organized them as a lay brotherhood, the Confraternity of the Most Holy Trinity, dedicated to serving the sick, the poor and pilgrims to Rome.

Neri’s work and reputation earned him high-placed friends and allies as well. Among them were saints Charles Borromeo, Francis Xavier, Francis de Sales and Ignatius of Loyola, and even popes Pius V and Gregory XIII.

It seemed that the more he was honored, the more he clowned. He wore big white shoes and his clothes inside out. He sometimes showed up at important events with half his beard shaved or half his hair cut.

He kept a jokebook handy and hung a sign over his door reading, “The House of Christian Mirth.” He even made numerous errors in pronunciation during a Mass, just to tweak a visiting bishop.

The seeming silliness was to make sure that people showed reverence toward God, but not his messenger. Neri said it also helped him grow in “holy virtues.”

“Cheerfulness strengthens the heart and makes us persevere in a good life,” he said. “Wherefore the servant of God ought always to be in good spirits.”

He was ordained at the age of 36 and went to live at San Girolamo, where he became rector in 1564. He then spent his days praying, hearing confessions and leading talks on faith and the Christian life.

Again his listeners increased, and a large room was built over the church at San Girolamo for the audiences. Other priests joined to help, eventually organized as the Congregation of the Priests of the Oratory.

Neri suffered ill health for a decade, and on the feast of Corpus Christi in 1595, he celebrated his last Mass with “extraordinary exultation, and as if singing,” according to a biographer. He then died of a hemorrhage at the age of 80. 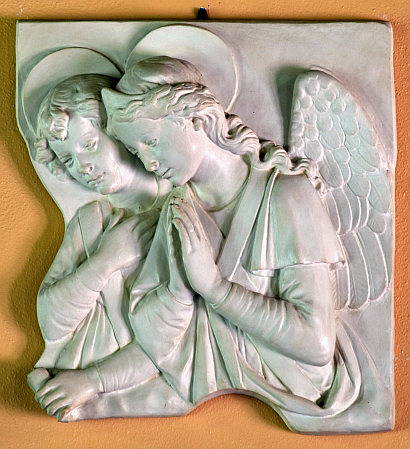 The South Florida parish named for him formed in 1951 in Opa-Locka’s Bunche Park neighborhood. For the first few years, Mass was celebrated in a vacant store in a shopping center and in various homes.

The members attended even though no priest had been assigned, and they were never sure if a priest would show up any given week. Finally, Msgr. Joseph Devaney started in 1952 as the first pastor. The following year, the parish opened its present Spanish-style church and bell tower.

Nor did the parishioners merely warm pews. They formed a Men’s Club, a Women’s Guild and a youth group. They began a daycare, a kindergarten and a St. Vincent De Paul Society. They’ve formed a justice ministry and a community life group. They also hold fundraising pie walks, food sales, car washes and an annual Calendar Tea.

In 2009, St. Philip Neri was closed as part of an archdiocesan program to consolidate parishes. Members drifted off to other churches, but they still met among themselves and continued to ask the archdiocese to re-open St. Philip Neri. Finally, Archbishop Thomas Wenski granted their request in October 2011, two years after it closed.

The parish plans a “St. Philip Neri Day” on May 29 for its 68th anniversary. Following a 9 a.m. Mass, there will be a luncheon on church grounds, under its massive live oaks.