'It's ok, we know you're smiling under that mask'

MIAMI | A comment I’ve been hearing lately more or less says it all about the times we live in.

That comment — when I point a camera in someone’s direction — goes more or less like this: “But no one can tell I am smiling with this mask on.” 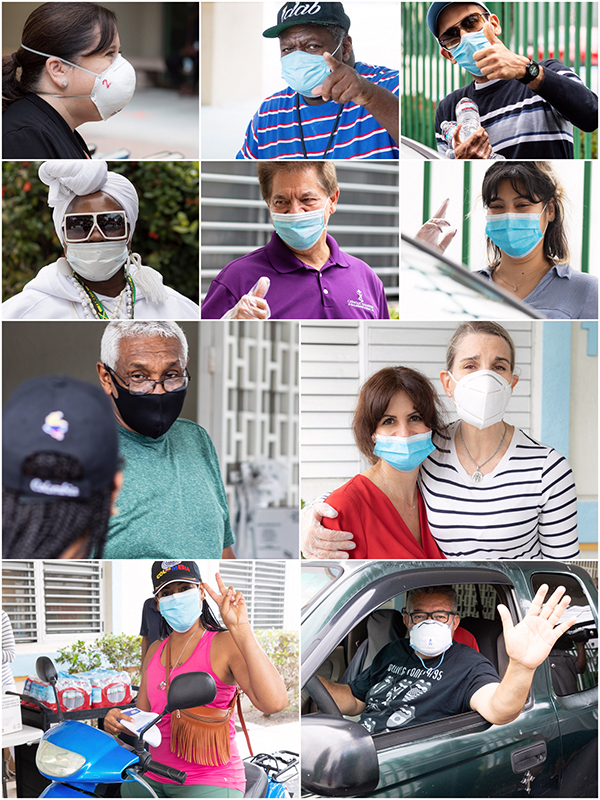 Can you see their smiles? Check out this collage of mask-covered faces photographed by Florida Catholic freelancer Tom Tracy in recent weeks.

Not necessarily true, but more about that later.

I’ve also been told by one concerned person that it's not possible to know whether I, as a photographer, am smiling. (I never realized that it was necessary that I also be smiling from behind the camera, but I assured that person that indeed I was.)

Months ago, at the early stages of the pandemic’s arrival in the U.S. and the subsequent national shutdown, I never would have imagined we’d very soon be walking around in masks and, for some, even goggles and gloves.

I guess my initial thought, similar to the one expressed by our President, was, “Oh no, tell me we aren’t going to forever be living like those people in the pictures from somewhere afar, always donning a medical mask as they board the subway and go about their business.”

How quickly things changed. Now I have a small collection of those precious masks, acquired along the way from various and gracious sources.

Early on, my eldest sister sent me just one of the good ones, the N-95, that came from somewhere on the other coast. Another was gifted to me by a media handler as I arrived on a job that required me to “mask-up.” It, too, was a coveted N-95, which I promptly added to the collection.

Then there are the set of three multicolored surgical masks that a neighbor gave me in exchange for a bag of oranges and a roll of paper towels. Slightly less coveted, those, but nonetheless good to have for less intense situations perhaps.

Five more of the standard medical masks, in blue, came my way this month courtesy of a snowbird Canadian American musician, as a kind of tip after doing her beach-and-guitar portrait. She said she had ordered those online before they became hard to find.

Finally, I have one of those heartfelt, hand-made cloth masks that we see people knitting at home and are sometimes featured on local TV news segments. It came courtesy of a woman named Wendy who was generously handing them out at a drive-up food distribution.

I am using that one to hold in place one of the N-95s which now has broken rubber straps. I stack them one on top of the other. Wendy also gave me one of those nifty, crocheted strap-hooks that runs around the back of the head and holds the two ends of the mask, taking pressure off the ears and increasing comfort.

Which brings me around to my point: Actually, yes, we can tell that you are smiling under those masks. It's just a matter of looking at the creases around the eyes; those smiling eyes which are a thousand times more essential for a picture and much more important than mouth and nose and chin. The eyes are the windows to the soul, isn’t that the saying?

So take heart, you look great. Keep those masks on. Stay safe.

Tom Tracy is a freelance reporter and photographer for the Florida Catholic in Miami. His work also has been published by Catholic News Service and Our Sunday Visitor.