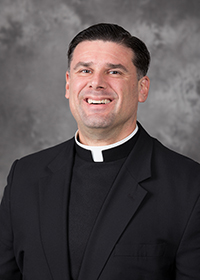 The appointment of Father Capó is presently director of the U.S. Bishops Southeast Regional Office for Hispanic Ministry and its Southeast Pastoral Institute (SEPI). He comes as St. Thomas University moves to promote and integrate the Catholic mission and core values of the university into all segments and areas of the institution.

His appointment is also a response to the U.S. Church’s calls for the formation of leaders in the context of cultural diversity and to the growing numbers of young Catholic Latinos, evidenced by the recent V National Encuentro.

Father Capó will be on the president’s staff and work directly with the president, provost, directors of campus ministry, chaplain, and all other university committees and entities in order to move this mission forward.

“It is an honor to be able to welcome Father Capó to our STU family,” said STU President David A. Armstrong. “With his leadership, in-depth knowledge, and strong ties to the Archdiocese of Miami, we will be able to infuse the Catholic identity into our university mission and strengthen our ties with the Catholic community.”

Father Capó is a priest of the Archdiocese of Miami, born in Puerto Rico and ordained in 1996.

“The Catholic Church in the United States has renewed its commitment to form and empower a new generation of leaders and missionary disciples,” said Father Capó. “I am happy to join St. Thomas University to help deepen its Catholic identity and mission in this historic moment and to accompany the administration, staff and student body in this exciting adventure.”

Father Capó has degrees in educational leadership and biology. He has worked as high school president, campus minister, teacher and vocations director. While doing his theological studies in Mexico and Rome he ministered to street children and immigrant youth.

Father Capó also has a licentiate degree in systematic theology and a doctorate in practical theology. He participates in all major organizations of Hispanic ministry and helps coordinate this ministry in throughout the southeastern U.S. He serves as advisor to the board of directors of the National Catholic Network de Pastoral Juvenil Hispana (La Red) and was appointed a Pontifical Missionary of Mercy by Pope Francis.