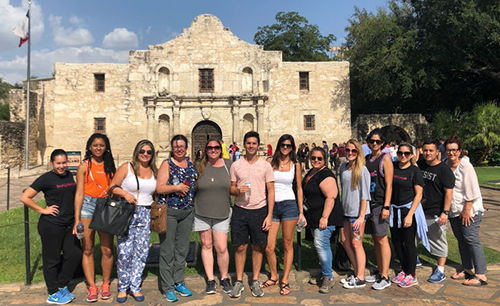 St. Thomas Law team of students, professors and mental health experts pose for a photo during their time in Texas.

The effort was launched by the Immigration Law Students Association (ILSA) at St. Thomas University, its president, Andrea Valencia, and immediate past president, Diego Sanchez. The students raised their own funds with the help of generous contributions from school of law faculty members.

The St. Thomas Law Karnes Pro Bono Project partnered with RAICES, a non-profit organization that remains on the front lines on this issue. Nathalia Lozano, Vanessa Baez and Catherine Perez were the project coordinators.

This is the third such trip that St. Thomas Law has taken to the Karnes Detention Center in Texas, having gone there in 2016 to assist with immigrant issues. But this trip was different for this team. While all the stories are hard to hear and difficult to fathom, the ones that detail the separation of young children from their parents heightened the urgency of the situation for these student advocates.

The team had to face issues such as fighting the lifting of injunctions that were preventing parents from being deported, witnessing parents begging their children for forgiveness for what has happened, and parents sacrificing themselves so that that their children could stay in the United States.

The humanitarian crisis caused by the separation of migrant children from their asylum-seeking parents has had an effect on everyone that has heard the heartbreaking stories. St. Thomas is grateful that its team did not simply shake their heads and offer comment about how sad the crisis is, but rather, took life-changing action to effectuate change.

Wednesday, 9 Jun 2021
Abuse of the elderly: another pandemic