Lions and tigers and Mt. Kilimanjaro

Cristina Cuadradoâs third-grade classroom is decked out in jungle attire in preparation for the virtual safari.

Cristina Cuadradoâs third-graders show off their leather bookmarks from Africa, given to them by Adrian Sierra, a parent of one of the students.

CORAL GABLES | Without leaving their classroom, third-graders at St. Theresa School climbed the heights of Kilimanjaro and explored the plains of Africa. 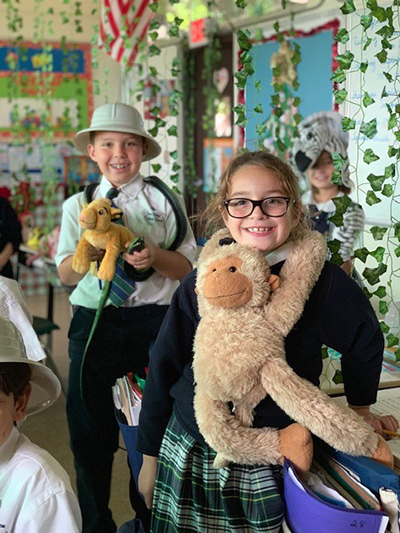 The Dec. 14 “virtual safari” was made possible by a National Geographic program called SafariLive. Third-grade teacher Cristina Cuadrado found out about it through Michelle Osso, whose daughter, Gianna, is in the class.

In preparation for the safari, the classroom was decorated to resemble a jungle. Students wore decorated pith hats and brought stuffed animals from home. When the designated time arrived, the class connected with four different safari guides who virtually took the children through Africa, visiting the plains and the lions’ pride, among other sites.

Students also submitted their questions in advance so the guides could respond.

Carolina Rodriguez asked, “Why don’t lions stay in one spot?” The guide’s answer: Because they need to exercise their legs.

“The hippopotamus is the deadliest animal in Africa,” said Adriana Fernandez, “but hippos, turtles and birds are friends.”

Student Sebastian Sierra’s father, Adrian, had been to Africa to climb Mt. Kilamanjaro, and he came to share his adventures with the class. Sierra went on a 7-day hike with six others, and he was one of the six that reached the summit. He then spent time with the Massai tribe in Tanzania, whose chief invited him into his hut and taught him some Swahili, which he, in turn, shared with the class.

“It was priceless to see the wonder, intrigue and excitement on my students’ faces,” said Cuadrado. “We were able to travel to another continent, communicate with guides and participate in a live virtual safari. It was an experience of a lifetime for all of us.”