'A legacy of faith' at St. John the Baptist Parish

St. John the Baptist Parish reflects on five decades of faith handed on from parents to children 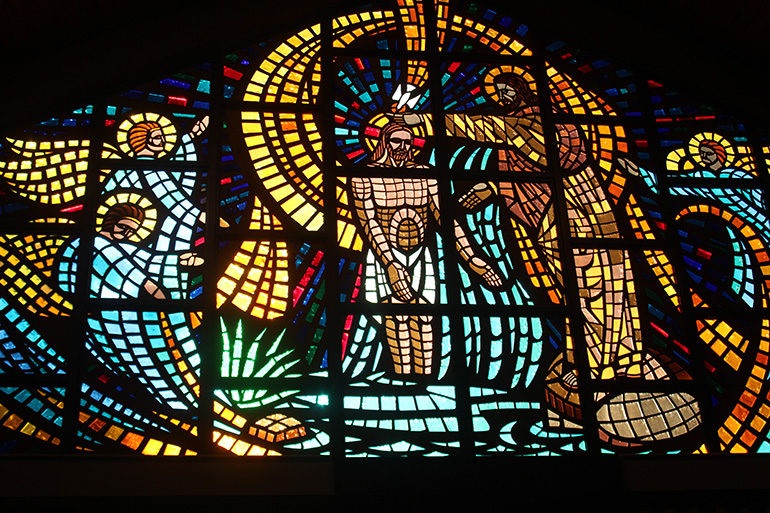 “Many of you grew up here in the parish. We want you to be distributors of faith. We want you to transmit faith to the children,” he said, noting that the theme for the golden jubilee is A Journey of Faith.

“We have to go back to see the origins of our faith. (We have to reflect on) what we have received in 50 years, and on where we are going,” said Msgr. Kelly, who has been pastor of St. John’s for the past 37 years.

The parish is planning a special anniversary Mass and celebrations Nov. 1, the feast of All Saints. The 5 p.m. Mass with Archbishop Thomas Wenski will be followed by a reception at a private venue.

St. John the Baptist Parish was founded Nov. 7, 1969, to serve nearly 400 families in the northeast corner of Fort Lauderdale and to provide a spiritual home for the community of Cardinal Gibbons High School, which had been built eight years earlier near the parish. 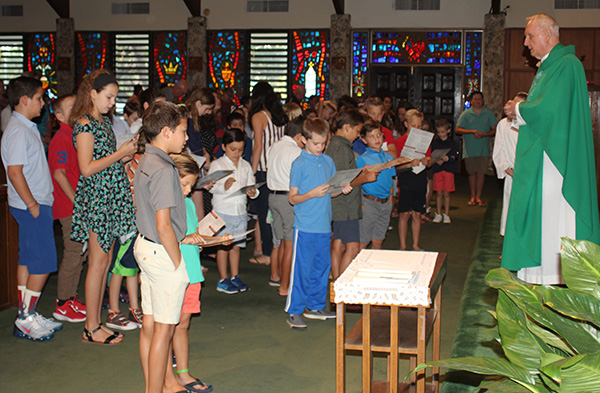 According to historical records, founding families, “inspired by God,” helped get the parish off the ground, reflecting “their great faith in the Lord and hope for the future.”

“Enthusiastic, energetic” young families with children also drove the prompt building of St. John the Baptist’s church, the house of worship they so wanted for themselves and “future generations to come,” according to records. The church was dedicated Dec. 18, 1971, by Archbishop Coleman F. Carroll.

Designed by architect Charles McAlpine, the church is rectangular-shaped with a sloped glazed tile roof. A focal point of the house of worship is a massive stained-glass window featuring the images of St. John the Baptist, the parish patron, known for evangelization and for baptizing Jesus.

The parish describes its mission as “nurturing a community of faith in Jesus Christ through worship, study, service and community.” It serves an estimated 700 families as well as tourists from the popular beach area and part-time residents who flock to South Florida during the winter months.

Father William Bowles and Piarist Father John Callan are part of the clergy team, and as far as groups and ministries, there is something for everyone to get involved. The parish features a women’s guild and men’s club, several prayer groups, Bible studies, ministry to the homebound and education programs for adults and children, with 170 youngsters currently enrolled in classes.

Terri Menno, a parishioner since the beginning, recalled her first experience at St. John’s. She had moved to Florida from Buffalo, New York, with her husband and two children and was searching for a spiritual home for her family. She attended a Sunday Mass and was hooked. “The parish was really small back then,” she said. “Everyone was nice and friendly. It was a nice community.”

Menno’s son and daughter grew up in the parish, she added. “My son is now an usher. I have seen the parish grow. I love it here. I have loved all of the priests.”

Father Thomas A. Dennehy served as the founding pastor, getting the parish organized and running. He also served as principal at Gibbons. 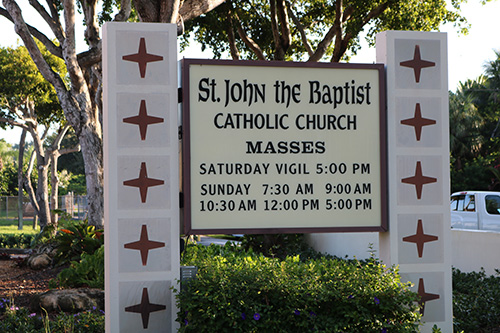 A sign welcomes worshipers to St. John the Baptist Church located in the northeast corner of Fort Lauderdale.

Father Paul Leo Manning’s appointment to lead St. John’s came April 16, 1972. As the parish continued to grow, Father Manning set goals for constructing much-needed facilities, including a meeting hall, offices and a residence for priests. Faithful parishioners once again actively supported the building project and in March 1977 the facilities were dedicated.

Msgr. Kelly, who came to the Archdiocese of Miami in 1969 and served in several capacities, including high school educator, principal and superintendent of education, arrived at St. John’s Feb. 10, 1982, to take on the role of pastor. During his tenure, he has continued to grow ministries and parish membership, improve facilities and encourage parishioner involvement. He is known for his friendly nature, powerful homilies and inspirational weekly bulletin messages.

Richard Zaden, a Fort Lauderdale attorney, grew up at St. John’s. His father, Joseph Zaden, was a parishioner from the beginning who still serves as an usher. Richard received his sacraments and solid faith foundation at St. John’s and continues to be active in the parish, helping where needed. He fondly recalls serving as an altar server when he was a youngster. He raised his own two children at St. John’s, passing along the faith to them.

“The church is the center of the community,” he said. “You pray here. You make friends. The church is where your kids make life-long friends and receive the sacraments.”

Just as the parish has been a big part of his family’s life, and apparently will continue to be for generations to come, St. John the Baptist’s 50th anniversary will be a time of nostalgia, but also a starting point as the journey continues. 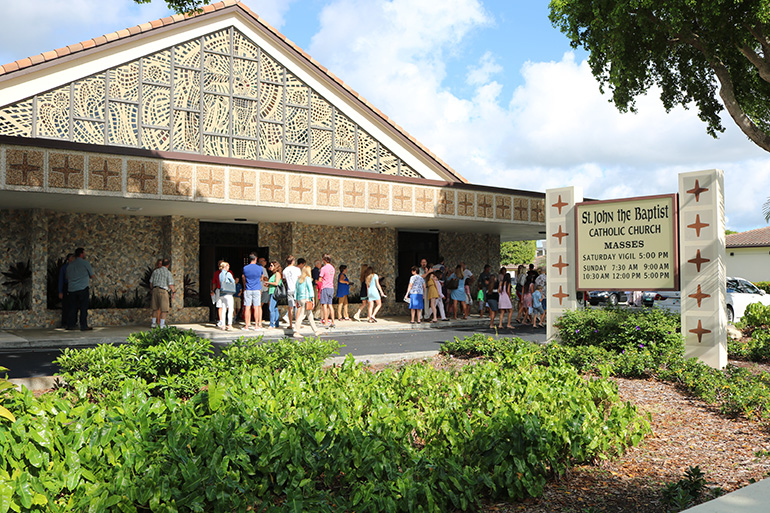 Worshipers socialize after Mass at St. John the Baptist Church, a busy hub of activity serving families and individuals living in and visiting the northeast corner of Fort Lauderdale.

Other News from St. John the Baptist Church

Wednesday, 15 Apr 2020
Parishes, too, need help to survive the pandemic