Sister of St. Joseph served as principal at St. Mary Cathedral and Gesu schools in Miami 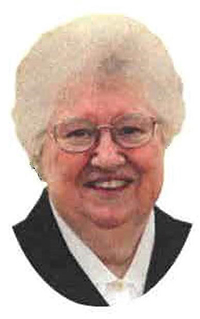 ST. AUGUSTINE | A funeral Mass will be celebrated Tuesday, Oct. 16, at the motherhouse of the Sisters of St. Joseph of St. Augustine for Sister Mary Esther Flanagan, 85, who died Oct. 11 after nearly 70 years of religious profession.

“Yes, Sister Mary Esther was the ‘singing nun’ whose beautiful voice frequently led the music in many convents and schools,” noted an online obituary posted by the Sisters of St. Joseph.

Born Marie Elizabeth Flanagan in Dublin, Ireland, June 21, 1933, she was the second child in a family of 10. She studied at St. Mary's Dominican School, where Irish missionaries frequently visited, telling of their interesting experiences in faraway countries. When a Sister of St. Joseph, Sister Mary Ambrose, visited Ireland looking for young women who would like to minister in Florida, Marie Elizabeth signed up. In September 1949, she and three other young women traveled to St. Augustine to become postulants.

When she became a novice, Marie Elizabeth received the habit and the name Sister Mary Esther. Those who knew her described her as a “born” teacher. She eventually earned a Bachelor of Science degree from Barry University and a master's in theology and Christian spirituality from Creighton University in Omaha, Nebraska.

After teaching in elementary schools throughout Florida from 1951-1956, she went to work in the migrant missions in the Palm Beach area. From 1963 to 1965 she taught home economics, English, religion and music at Cardinal Mooney High School in Sarasota.

After leaving St. Mary’s in Miami, she served as principal from 1973 to 1976 at Christ the King School in Jacksonville. From 1981 to 1999, she served at Epiphany School and Parish in Lake City as religion coordinator and director of religious education.

In 1999, she became a house mother at Divine Mercy House, a Jacksonville home for unwed mothers. From 2002 to 2004, she offered spiritual direction at St. John Neumann Center in Tallahassee; and from 2004 to 2007 she served as coordinator at Our Lady of Lourdes Convent in St. Augustine, where she resided until her death.