Oblate Sister of Providence remembered as 'God's gift' and 'a star'

MIAMI | When she left Miami for her motherhouse in 2016, Sister Clementina Givens promised this: "I've already told the mother general: I may be 94, but I don’t intend to sit down, waiting for death."

And indeed, she didn’t.

“She just did a lot of reading and praying and going to Mass,” said Mary Sells, a parishioner at St. Patrick who struck up a friendship with Sister Clementina after a chance meeting at the church. Sells visited her whenever her job took her near the Oblate Sisters of Providence motherhouse in Baltimore. 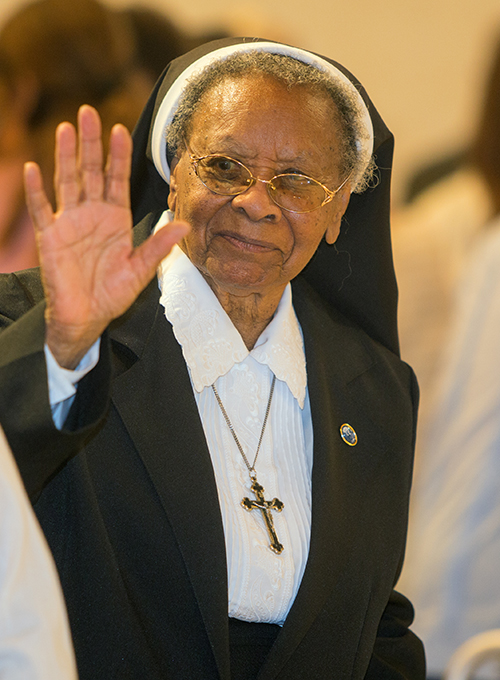 Sister Clementina died there April 17, 2021, at the age of 99. Funeral services took place April 22. Parishioners at St. Patrick, where Sister Clementina served for more than 20 years, found out via an announcement on the parish website this weekend. They planned to celebrate a memorial Mass this Friday, April 30, at 11 a.m. at the Miami Beach church. The Mass will be livestreamed on the parish website.

Although Sister Clementina suffered from diabetes, her death was “not expected, very quick,” Sells said.

A fellow Oblate put it more poetically at her funeral: “You slipped away so silently April 17. We did not expect to see you go so soon. No one got to say a proper farewell. But then, you were always so reserved.”

Reserved, and equal parts tough and tender. “A strict teacher but filled with empathy, For both parents’ and students’ foibles, Having empathy for frail human nature,” continued the tribute.

Sister Clementina was born Gladys Givens on Nov. 15, 1921. Her mother died when she was a toddler and she was raised by her Methodist uncle. But her father extracted from him a promise that she would be educated in the Catholic faith.

“An Oblate sister was her high school teacher, and they became good friends,” Sells said.

Sister Clementina used to tell the story that, at her confirmation, that sister asked for prayers for a young woman “who has a vocation but doesn’t know it yet.” That young woman, of course, was Sister Clementina. She entered the Oblates — the first congregation founded for and by women of color — right after high school, Sept. 8, 1940.

At a celebration for her 75th anniversary as a religious, Father David Russell, a retired archdiocesan priest who helps at St. Patrick, noted that Sister Clementina’s life had been full of challenges as a Black woman during a time of racial discrimination.

“There was a time when Sister Clementina had to ride in back of the bus,” he said. “Through all that, Sister was rock solid. When I think of Sister I think of her smile. It comes from her soul where Jesus Christ dwells.”

That’s pretty much what Donna Moore, Sister Clementina’s niece, told the Florida Catholic at that same celebration. "The Spirit of God is so strong in her; when you sit near her, you feel it. Sometimes it's dizzying. I've always loved to be around her. She's been a source of strength and prayer and patience."

The Oblates’ tribute puts it this way: “Beware of sly smiles from quiet nuns, Who have Jesus as their main flame. They will have a Jesus-talk about you, Sometimes right there, in your face.”

“She could look at somebody and just read them,” Sells said. “She always knew what she needed to say, what the message from God was.”

Sister Clementina served as a teacher and administrator in various venues — Chicago, Charleston, Baltimore and Washington, D.C. — before arriving at Holy Redeemer in Liberty City, where she served as teacher and principal from 1962 to 1973. She returned as administrator from 1981 to 1988. (The school closed in 1990 and now houses a Catholic Charities Head Start program.)

After her second term at Holy Redeemer, Sister Clementina took a one-year sabbatical at the Oblates' motherhouse in Baltimore; then she served from 1989 to 1996 as director of the Office of Black Catholic Ministry in Rockford, Illinois. She then went to St. Patrick as director of religious education, where she remained until 2016.

Few of her former students, whether in school or religious education, ever forgot her.

"You see this woman? She is God's gift," Miranda Albury of Miami told the congregation at Sister Clementina’s farewell Mass. She then addressed her former teacher: "You loved every child. You touched every life. You gave us hugs and hope."

Albury added later in an interview: "What she gave us as African Americans was pride. With Sister Clementina, you got your education. She said it was our ticket to wherever we were going in life. There was no such thing as failing."

“What fond memories we have of her,” said another former student, Katrenia Reeves-Jackman, director of the archdiocesan Office of Black Catholic Ministry. Speaking at Sister Clementina’s 75th anniversary celebration, Reeves-Jackman said: “She taught us a lot about being Black and Catholic. We know that we matter. She told us we could be and do anything we wanted. She’s a star.”

In her honor, St. Patrick Parish started the Sister Clementina Givens Endowment Fund for disadvantaged students. It was launched in 2015 with $100,000 and a goal of $1 million.

At that 75th anniversary celebration, Sister Clementina marveled at her life: "I wanted a big family with a lot of children. And God gave me all these children."

Sells summed up the sorrow of those children when she said of Sister Clementina’s passing: “She was 99. She was always ready. But I wasn’t.”

Corrected April 29, 2021: The Sister Clementina Givens Endowment Fund was started by St. Patrick Parish, not the Office of Black Catholic Ministry as originally stated in the story.