Sex and the Super Bowl 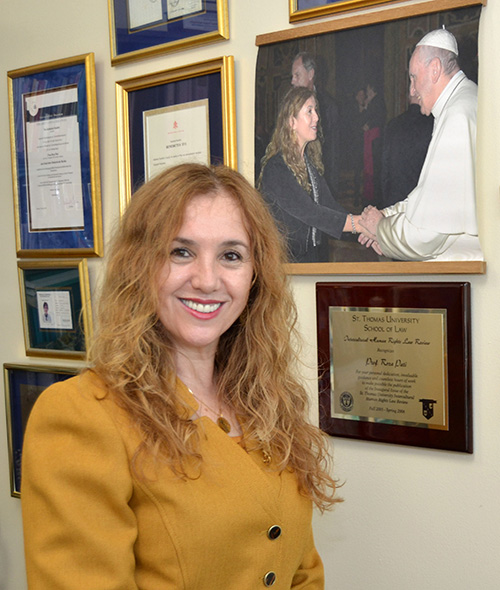 Roza Pati directs the Human Trafficking Academy, which she founded in 2010 at St. Thomas University in Miami Gardens.

MIAMI GARDENS | Next February, thousands of people will flock to Miami for Super Bowl LIV. Most will come for football. Some will come for illicit sex. And a few will be there to indulge the latter — even using the equivalent of modern slaves.

Those are the ones Roza Pati will target. Hence the focus of her next Human Trafficking Academy at St. Thomas University.

“Recruiters and pimps will be well organized,” said Pati, who will host the annual weeklong academy July 15-19 at the university. “Sometimes, the girls will have been kidnapped. Because the demand will be heightened.”

The academy will place sex trafficking in a social context — not only Super Bowl but other big sports events, like the Olympics and the World Series. Participants also will learn root causes of trafficking, plus the state of international agreements on human rights.

Pati outlined some of the methods used by the traffickers to put girls — and sometimes boys — together with customers:

Pati noted that the Polaris Project, a victim support organization, ranks Florida third nationally in such businesses — surpassed only by California and New York.


The academy will use roleplay and scenarios of possible human trafficking situations — like the same driver dropping off people at a massage business several times — and ask students how they would react.

Not that the Super Bowl is inherently evil, Pati said. She noted that the Miami Super Bowl Host Committee is partnering with the local state attorney’s office and The Women’s Fund to counter human trafficking attempts.

“Any art or concert or sporting event creates an opportunity for fun,” Pati said. “And crime syndicates take advantage of that and offer other kinds of fun.”

The number of those enslaved or trafficked has been drastically revised upward as organizations learn more about human trafficking. In 2012, the International Labor Organization estimated 20.9 million. By 2017, however, the ILO raised the number to 40.3 million. And women and girls are disproportionately affected, including 99 percent of victims in the commercial sex industry.

Is the number rising? No one is sure. Pati does say that as people and governments are more “enlightened” about human trafficking, they may be more apt to report it, not look away or suffer in silence.

This year’s Human Trafficking Academy will highlight beliefs in human rights and dignity — spiritual values that stand in stark contrast to what Pati calls “an equivalent of the old slavery: ownership or control of one person over another.”

From that standpoint, slavery includes exploitation in a broad variety of businesses, like fishing, farming and mining. “Human trafficking is not just a crime — it’s a social phenomenon,” Pati said. “It is deeply ingrained in society. We need to strengthen society in all angles: government, the private sector, academic institutions.” 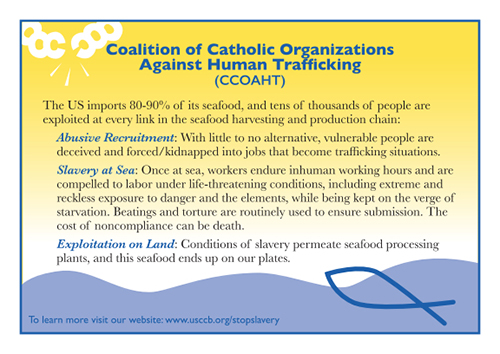 St. Thomas University took part in a campaign to ask the Costco company to ensure that its seafood doesn't come from exploited labor.

This requires layers of support, according to Pati. First comes “respect” for human rights, including laws and company policies. Next is protection: prosecuting criminals, sanctioning the immoral. The next step would be to “ensure” rights.

The latter would have corporations “clean up their supply chains,” making sure that companies from which they buy goods don’t abuse their workers. Pati said 69 of the richest organizations in the world are not nations — they’re corporations.

Companies might not abuse employees themselves; but if their non-American suppliers do, it must be opposed, she said. “Many of the workers are in countries not known for the rule of law. And in fishing and agriculture, abuse is rampant.”

As one fix, she recommended that companies spell out the efforts they are making to keep their merchandise from being produced by exploitation. “Why not expect corporations to bring us items made by slave-free labor?” Pati asked.

Since Pati founded it in 2010, STU’s Human Trafficking Academy has trained about 10,000 people, including police, judges, attorneys, social workers, college professors, religious leaders and caseworkers for the state Department of Children and Families. But she is also working beyond the “experts” to empower the laity in the war on slavery.

This spring, the Coalition of Catholic Organizations Against Human Trafficking — of which STU is a member — took part in a Labeling for Lent campaign. The university helped distribute pre-printed postcards asking the Costco company to show it deals with fishing industries that don’t exploit their workers.

Pati is also contributing to a Vatican study, called “Pastoral Orientations on Human Trafficking.” The 42-page document reports facts and analyses, sets forth Catholic beliefs on human dignity, and suggests ways people can help combat slavery. It also has an e-mail address for public comment.

Pati has crafted her career for such work. Born in Albania, she holds degrees from the universities of Tirana and Potsdam. She teaches law at St. Thomas and has expertise in human rights law, human trafficking law and terrorism law.

Pope Benedict XVI appointed her in 2012 to the Pontifical Council for Justice and Peace at the Vatican, an appointment reaffirmed by Pope Francis. In 2016, the council was absorbed into another Vatican-level group, the Dicastery for Promoting Integral Human Development.

The organizational move helps to bring together legal and philosophical views of human dignity: physical, mental and spiritual. And to show that the Church welcomes everybody, including those on the fringes.

“I think we Catholics in the lower ranks aren’t familiar with all the dimensions,” Pati said. “And in the secular world, people are forgetting the spiritual dimension. So we need to refresh and reconstitute that in daily life.” 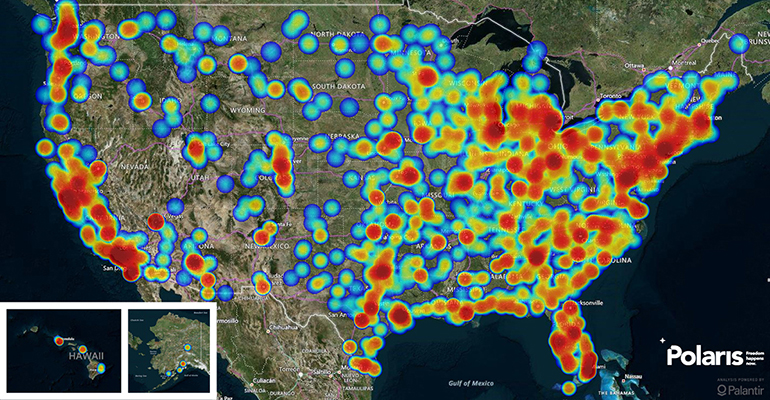 Screenshot of a hotline map produced by The Polaris Project that shows Florida as a hotspot for human trafficking.