Seminarians look back on summer of blessings 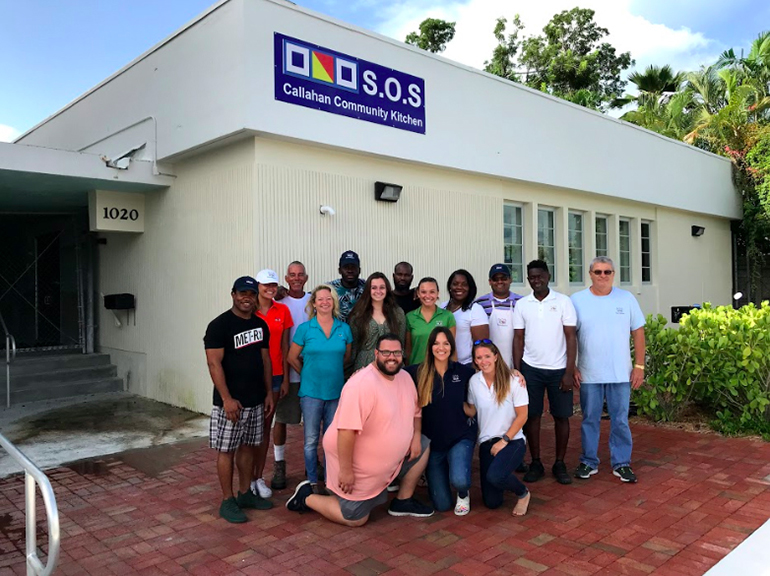 Volunteers and staff, including four archdiocesan seminarians, pose for a photo outside the SOS Callahan Community Kitchen, one of several outreach programs sponsored by the Basilica of St. Mary Star of the Sea in Key West. The kitchen, located behind Key West's city hall, was dedicated in December 2018.

KEY WEST | Father John Baker, pastor and rector of the Basilica of St. Mary Star of the Sea in Key West, needed extra hands and needed them fast. 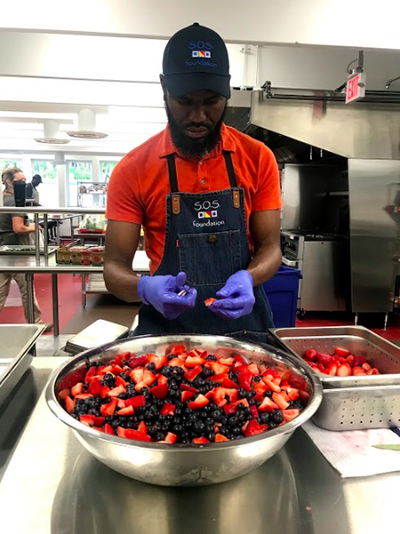 Seminarian Dieutan Marseille helps with food preparation at the SOS Callahan Community Kitchen, one of several outreach programs sponsored by the Basilica of St. Mary Star of the Sea in Key West. He was one of four seminarians who helped at the parish ministries last summer.

Father Baker knows the secret of life in the lower Keys: Despite the fancy fishing boats and mega yachts that dock there, the expensive hotels that draw fun-loving, sun-seeking tourists from all over the world, and palatial waterfront homes that are priced well out of the reach of most folks, many residents of the Keys are not sure where their next meal is coming from.

“The amount of need here is just tremendous,” he said. “Monroe County is the third most expensive county to live in in the United States.”

So to help his parish better serve those in need, Father Baker often looks to volunteers in the community. And the community usually comes through.

But when his need was especially great a year ago, the helping hands came from a different source — four seminarians: Franklin Ifeanyichukwu Ekezie, Milton Jose Martinez, Sebastian Grisales and Dieutan Marseille. Now, after completing their service in America’s Southernmost City, they have had ample time to reflect on what the experience meant to them and what effect it had on their preparations for the priesthood.

“It’s always been about service, and that’s what I think appealed to the seminarians,” Father Baker said. “By the service they’ve given, they’re involved. There’s a new generation of priests willing to serve.”

“It is obvious that Key West is expensive,” said Ekezie. “As a little island, there are a lot of people in that area who are wealthy as well as the poorest of the poor.” 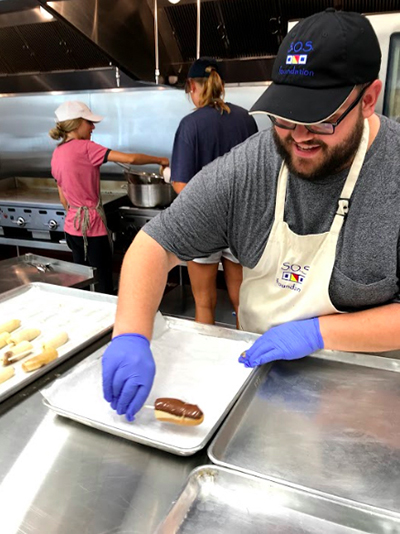 Seminarian Sebastian Grisales helps with food preparation at the SOS Callahan Community Kitchen, one of several outreach programs sponsored by the Basilica of St. Mary Star of the Sea in Key West. He was one of four seminarians who helped at the parish ministries last summer.

He added that there are also a significant number of others struggling with addictions to drugs and alcohol. “This church, under the leadership of Father Baker, has come up with a plan to help the people in this area with her Star of the Sea Foundation, to eradicate hunger and help people to live healthy through her soup kitchen and food pantry.”

The SOS Foundation, as it is commonly called, assists the needs of the community by distributing food through its network of food pantries in Monroe County, preparing meals for children and the elderly at its SOS Callahan Community Kitchen, and promoting healthier eating through nutritious prepared meals and nutrition education.

The 3,800-square-foot Callahan Community Kitchen was dedicated last December. The $1 million project was made possible in part by a grant from the Jessie Ball DuPont Fund, facilitated through the Archdiocese of Miami.

Children receive many, but certainly not all, of the basilica parish’s services. “We have children on our property 51 of the 52 weeks each year,” Father Baker said.

The Martha Ministry soup kitchen, another of the church’s outreach programs, serves meals made at the community kitchen to clients of the Keys Overnight Temporary Shelter.

The food pantry program serves families throughout the Keys and in 2016 alone, provided families with 1.8 million pounds of food.

“I enjoyed working at both the Star of the Sea Outreach Mission food pantry and the SOS Callahan Community Kitchen,” said Martinez, who worked for nearly two decades in the banking industry before deciding to enter the seminary. “I was able to participate with a loving community that pays it forward, reaching out to the less fortunate ones. Also, I enjoyed serving in the daily and Sunday eucharistic celebrations at the basilica.” 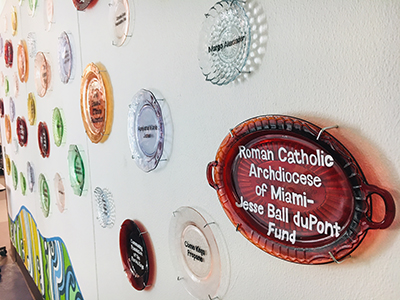 The recognition wall at the SOS Callahan Community Kitchen notes the contribution of the Archdiocese of Miami, which facilitated a grant from the Jessie Ball Dupont Foundation. The kitchen is an expansion of the outreach programs sponsored by the Basilica of St. Mary Star of the Sea in Key West. Located behind Key West's city hall, the kitchen was dedicated in December 2018.

What they accomplished, who they helped and how they felt about their contributions left a deep and lasting impression.

“My best experience in Key West was being a volunteer to help provide food for summer camp kids and giving out food, clothing and furniture to the people who need help at the food pantry located on Stock Island,” Ekezie said. “I spent six weeks in Key West and I will tell you from the bottom of my heart, it is one of the best (experiences) so far.”

Martinez said he was granted yet another blessing when he was called upon to return to serve at St. Mary Star of the Sea parish this summer.

Other News from Basilica of St. Mary Star of the Sea

Published 1 day ago
St. Peter's Fleet fishes for the needy

More articles about Basilica of St. Mary Star of the Sea