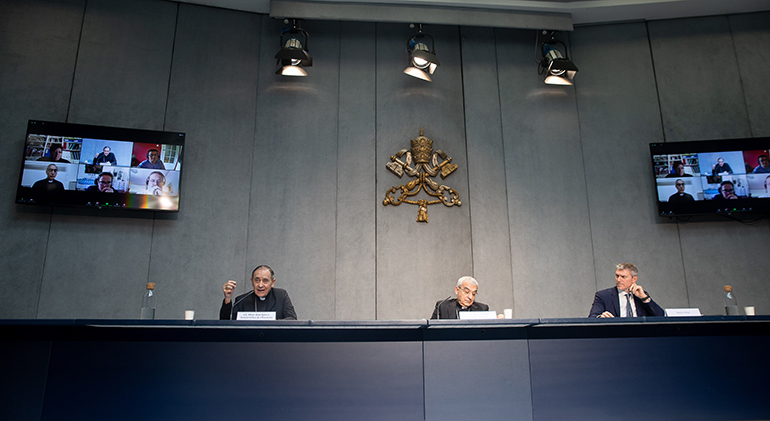 View of the press conference about amendments to Book VI of the Code of Canon Law, held June 1, 2021 at the Holy See Press Office in Vatican City.

VATICAN CITY | The Vatican published June 1 major revisions to Book VI of the Code of Canon Law, which covers penal law in the Church, including sanctions related to clerical sexual abuse.

The revisions, which have been more than a decade in the making, were first commissioned by Benedict XVI with the aim of making the code’s penal sanctions more effective and applied evenly across the Church.

Pope Francis introduced the changes with the apostolic constitution Pascite gregem Dei (“Tend the Flock of God”). He wrote that those who have committed a crime “need both mercy and correction on the part of the Church.”

The pope said that the revisions have improved “fundamental aspects of criminal law, such as the right of defense, the statute of limitations for criminal action, [and] a more precise determination of penalties.” 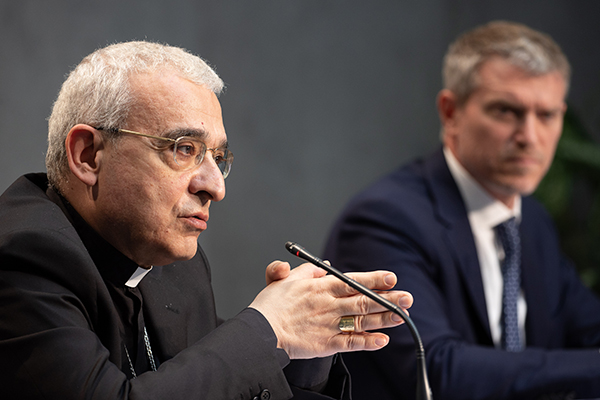 Archbishop Filippo Iannone, the president of the Pontifical Council for Legislative Texts, speaks at the press conference announcing amendments to Book VI of the Code of Canon Law, held June 1, 2021 at the Holy See Press Office in Vatican City.

The reforms also introduced new crimes in the area of economic and financial matters to canon law, and moved the canons concerning the crime of sexual abuse of minors and crimes of child pornography from the section on “crimes against special obligations” to that of “crimes against life, dignity, and freedom of the person,” as CNA reported last month.

Under the revised laws, lay people, including founders of lay religious movements and parish employees, can also be sanctioned for sexual abuse.

The Vatican initiated the reform to canon law because of concerns that some parts of the Church were failing to apply penal sanctions amid the burgeoning abuse crisis.

“In the past, much damage has been caused by the Church's failure to perceive the intimate relationship between the exercise of charity and recourse — when circumstances and justice require it — to the discipline of punishment,” Pope Francis wrote in Pascite gregem Dei.

“Such a way of thinking — experience teaches us — risks leading to living with behavior contrary to the discipline of morals, for the remedy of which exhortations or suggestions alone are not sufficient. This situation often brings with it the danger that, with the passage of time, such behavior will become consolidated to the point of making it more difficult to correct and in many cases creating scandal and confusion among the faithful."

Pope Francis signed Pascite gregem Dei on the Solemnity of Pentecost and the text was released June 1, 2021. The revisions to Book VI will enter into force on Dec. 8, 2021.

At a Vatican press conference, Archbishop Filippo Iannone, the president of the Pontifical Council for Legislative Texts, the Vatican department that oversaw the changes, said that there had been misunderstandings about the relationship between justice and mercy in recent years. This has “fed a climate of excessive laxity in the application of criminal law” in the Church, the archbishop said.

“The presence of some irregular situations within the communities, but above all the recent scandals, which have emerged from the disconcerting and very serious episodes of pedophilia, has, however, led to the need to reinvigorate canonical penal law, integrating it with precise legislative reforms,” Iannone explained. 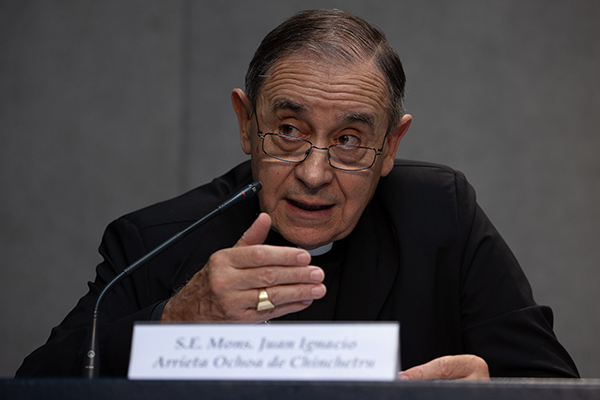 Bishop Juan Ignacio Arrieta Ochoa de Chinchetru, secretary of the Pontifical Council for Legislative Texts, speaks at the press conference where the Vatican announced the amendments to Book VI of the Code of Canon Law. The announcement was made June 1, 2021 at the Holy See Press Office in Vatican City.

Bishop Juan Ignacio Arrieta Ochoa de Chinchetru, the secretary of the pontifical council, highlighted how the revised Code of Canon Law now includes crimes that have been typified in recent years in special laws, such as “the attempted ordination of women, recording of confessions, and sacrilegious consecration of the Eucharistic species.”

Msgr. Markus Graulich, the council’s undersecretary, said in an interview with CNA Deutsch, CNA’s German-language news partner, that these changes to Church law were necessary because the previous criminal law was not very “user-friendly.”

“In many places, punishments were mentioned only as a possibility, and the whole text gave the impression that it was almost merciless to apply punishments,” he said.

“In this regard, it must be remembered that the penal law was renewed at a time when the law in the Church, and especially the penal law, was fundamentally questioned. Today — also due to the examination of the abuse of minors — the atmosphere is different.”

The Pontifical Council for Legislative Texts is not itself a lawmaker, but assists the pope, who is the Church's supreme legislator, in drafting, and interpreting canon law.

Pope Benedict XV established the pontifical council following his promulgation of the first Code of Canon Law in 1917. The Pontifical Council for Legislative Texts has since played a role in interpreting the decrees of the Second Vatican Council and revising the code of canon law. A new code for the Latin Catholic Church was promulgated in 1983, and a code of canons for Eastern Catholic Churches was promulgated in 1990. The council worked for more than a decade on the revisions to Book VI, published on June 1.

Archbishop Iannone said: “This reform, which is presented today, therefore, as necessary and long-awaited, has the aim of making universal penal norms ever more suitable for the protection of the common good and of the individual faithful, more congruent with the demands of justice and more effective and adequate in today’s ecclesial context.”

Valli Leone - 06/03/2021 08:26 AM
Thank you once again for this notification of good news from the Vatican. As the Body of Christ, these sanctions will continue to help us to hate what is evil and to cling to what is good (Romans 12:9). Pope Francis is a Vicar par excellence, in my opinion. The Holy Spirit lives and moves and has his very being in him. His papacy fills me with joy unspeakable, full of glory! Thank you, Jesus; and thank you, Archdiocese of Miami! âï¸âï¸ð