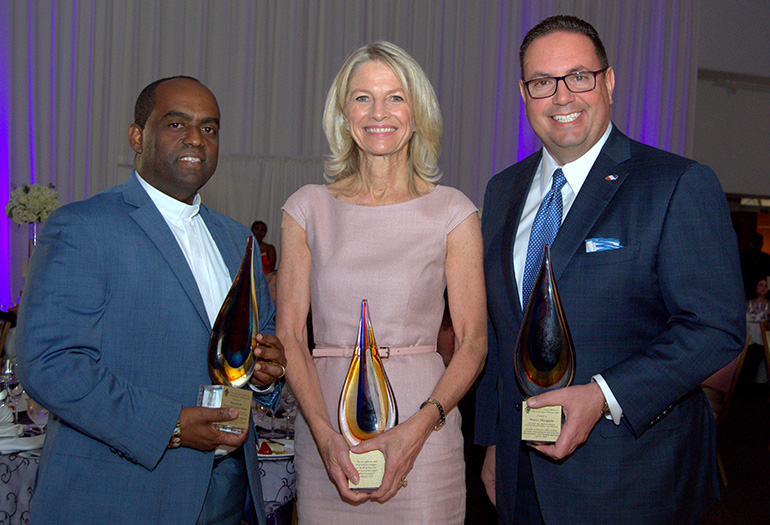 The three honorees show their New American Awards at the 20th anniversary gala for Catholic Legal Services in Miami on April 27. From left are Father Reginald Jean-Mary of Notre Dame d'Haiti Church; Julie Grimes, managing partner for a hotel chain; and Mario Murgado, CEO of a Miami-based auto dealership.

MIAMI | Anastasia White is from Russia, not Central America or the Caribbean. But she knows something of the hurdles that modern immigrants face â hurdles that she says have gotten higher and harder since she arrived nine years ago.

“I’m passionate about this,” the Fort Lauderdale-based attorney said at the New American Awards Gala April 27. “I feel like I change people’s lives. It’s a huge responsibility, but it’s hugely rewarding, too.”

She had plenty of company at the 20th anniversary gala of Catholic Legal Services. More than 300 lawyers, clergy, community leaders and others gathered to celebrate the milestone, to honor heroes of the cause, and to donate to the group’s ongoing work.

CLS got the hearty endorsement of Archbishop Thomas Wenski, who helped to found it two decades ago. 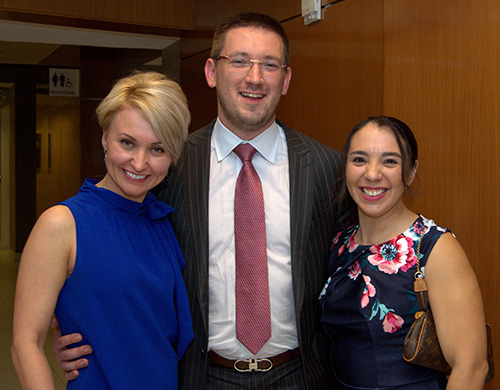 “Few other jobs in this community are so meaningful,” he said in a short talk at the gala. “When they change a life, it’s changed forever. What could be more beautiful?”

Held at the J.W. Marriott Marquis Hotel, the gala singled out three people for special honors:

The Miami event brought some people from far up the coast. Among them was Father Frank O’Loughlin, who has fought for decades for the rights of migrant workers in South Florida’s sugar cane fields.

Father O’Loughlin, currently executive director of the Guatemalan-Maya Center in Lake Worth, voiced something like awe for the determination of longtime activists like those at CLS, especially for children’s cases he sends to them.

FABRIC OF THE NATION

“If you were working for these minors, how would you bear up?” he asked. “How do these young lawyers do it?”

Although the gala wasn’t meant as a political rally, Grimes was one of several people who raised warnings about the direction of U.S. immigration policy.

“Immigrants make up the very fabric of this nation,” she said in her acceptance speech. “Lately, however, we are seeing tears in our nation’s fabric, pulling at the weaves that bond us â¦ The politics of race and fear must be answered with the power of unity and the strength of community.”

Archbishop Wenski added his own assessment of political problems. “We all want to make America great, but not to make America mean â¦ The system is broken. We need comprehensive immigration reform.”

Also included at the awards gala was a three-minute preview of a documentary on unaccompanied children, being produced by Alexandra Codina of Miami. The preview shows a family of four struggling to stay in America and escape gang violence in their native Honduras.

“We go well beyond politics and stand for the rights that we all have as human beings, and the rights that all children have, regardless of immigration status,” Codina said. Then she introduced the refugee family, who had been sitting at dinner with her, to effusive applause. 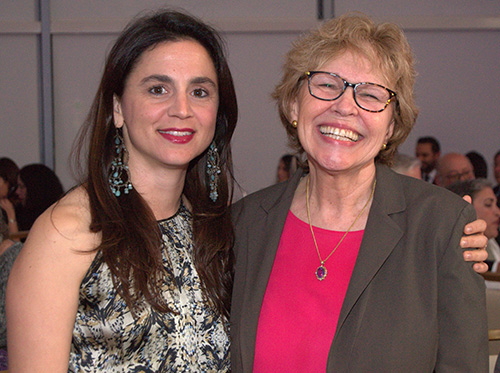 Filmmaker Alexandra Codina, left, shares a moment with Cheryl Little, executive director of Americans for Immigrant Justice, at the 20th anniversary gala for Catholic Legal Services in Miami on April 27.

The film project, on which Codina has worked for three years, is due out in the winter, but it already won an award from the Tribeca Festival in the category of best documentary feature.

Codina in turn was inspired by a 2017 report by Americans for Immigrant Justice on Central American children who were being denied asylum in the U.S.

“The kids risk their lives to come here,” said AIJ executive director Cheryl Little, who was at the Friday event. “They feel it’s the only way to save their lives.”

She praised Catholic Legal Services and those who partner with it. “It’s not about getting get their name in lights or wearing a fancy gown to a banquet. It’s about caring for the most vulnerable people in our midst. And it’s about recognizing the people who are dedicated to giving them a chance at justice.”

In his own address, CLS executive director Randy McGrorty sounded notes of praise, then alarm. He thanked his staff for working on behalf of immigrants. He even thanked the immigrants, “because you persist in your effort to join this country. Your determination honors the best tradition in America.”

His warning: Funds are drying up for groups like CLS, including Catholic Charities, Church World Service and the Human Rights Institute at St. Thomas University.

“They are slowly being starved of resources,” McGrorty said. “If we disappear, not only will the clients disappear, but so will their contributions. Even more perilously, we will lose the rule of law.”

Funds were raised for CLS in more than one way at the gala. The diners paid $250 a plate for braised short ribs, black truffle polenta and roasted veggies, with dessert of strawberry and guava cheesecake with vanilla custard mousse. They also wrote bids for a silent auction of jewelry. Finally, envelopes had been placed on each table for outright donations.

Archbishop Wenski himself wasn’t shy about pitching for CLS in his own talk. He quoted a Creole saying: “To say ‘Thank you’ is to say ‘Please give some more.’” And apparently they did, clearing a total of more than $70,000 for the evening, according to chief operating officer Myriam Mezadieu.

The evening drew not only professional activists but people like Henry Rodriguez, parts director for a local car dealership. This was his third time at the annual gala but perhaps the most evocative for him: Last year, he was in a car crash that put him in a coma for four months. His heart stopped twice, and he needed a total of 110 pints of blood.

“I shouldn’t be alive,” said Rodriguez, who attends Our Lady of the Holy Rosary-St. Richard Parish in Palmetto Bay. “I’m blessed to be here, and I want to help as best I can.”

If the younger attorneys were any measure, the gala ensured the future of commitment as well as cash.

“It was uplifting, a great event,” said Nadia Gonzalez of Fort Lauderdale. “It’s good to see others who feel the same way.”

Aliaksandr Sirytsyn, who was born in Belarus, likewise said the gala motivated him to continue the fight for immigrants.

“CLS inspires me to do something for the community,” said Miami-based Sirytsyn, who does occasional pro bono immigration cases. “They’re changing the image of attorneys.” 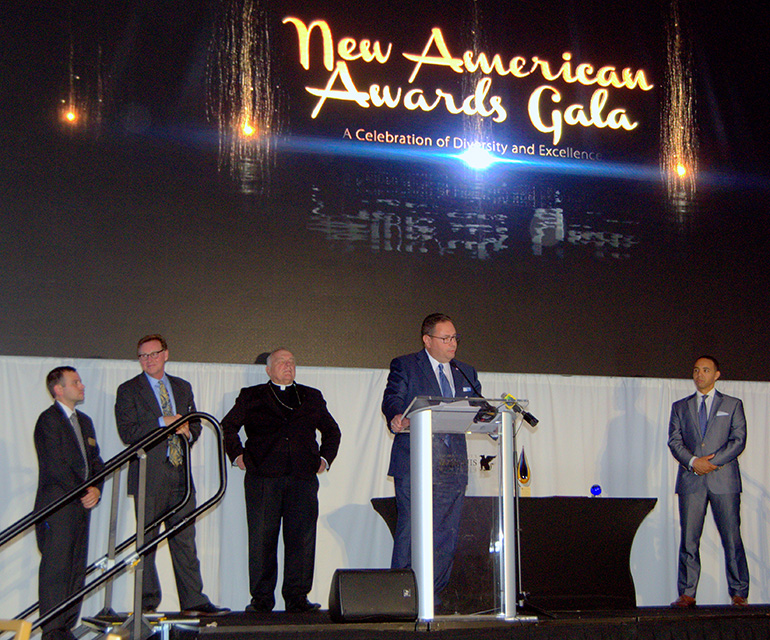 Mario Murgado gives his acceptance speech as one of three honorees at the 20th anniversary gala for Catholic Legal Services in Miami on April 27.