A trinity of anniversaries

PALMETTO BAY | Our Lady of the Holy Rosary-St. Richard Church in Palmetto Bay will celebrate a trinity of anniversaries in October, and its ecclesial union as one vibrant, multicultural faith community through trials of fire, hurricane, demolition and merger.

This year marks the 60th anniversary of the founding of Our Lady of the Holy Rosary in what is now Cutler Bay. In 1969, St. Richard Parish was established in Palmetto Bay; and its church is marking the 30th anniversary of its construction.

The two congregations merged in 2010 on St. Richard’s campus, in a verdant, suburban neighborhood at 7500 S.W. 152 Street, near Coral Reef Park. But they were linked from inception: founding members of Holy Rosary became pioneer members a decade later of St. Richard, about four miles away.

Archbishop Thomas Wenski will celebrate the jubilee Mass Saturday, Oct. 5, at 4 p.m., with Trinitarian Father William Sullivan, parish administrator, and other clergy as concelebrants. The Mass will be followed by an anniversary gala dinner. 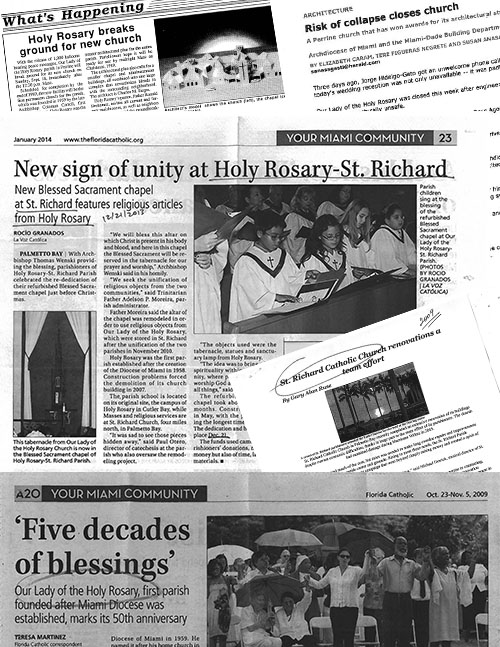 Collage of news clippings from Our Lady of the Holy Rosary and St. Richard parishes.

Deacon Robert O’Malley, a St. Richard's member since 1981, said the parish was always a loving community and emerges nine years after consolidation even larger and stronger, with nearly 2,000 families.

“We’re all looking forward to celebrating this special day and as an opportunity to gather as a faith community. We’re hopeful that this will continue to bring closeness to our community and will help us grow as Christians,” he said. “It’s a process that you go through whenever you have two parishes merge. It’s not easy. It takes years and I think that we’ve come a long way and we’re doing quite well in terms of recognizing that we’re one, we’re not two separate churches.”

The Trinitarians (Order of the Most Holy Trinity) began shepherding the parish in 2012 and have worked to build unity, despite the setback of a fire that required the chapel to be restored. Six years ago, the parish initiated its annual International Food & Art Festival to celebrate its increasing diversity and multicultural Miami congregation. The festival will be held this year Oct. 19.

“We’re so international. We probably have 40 different countries represented in our parish, mostly Hispanic, Latin American, and that’s a way to bring them all together,” said Father Sullivan. “It’s growing and has become quite a large undertaking and a major fundraiser for our parish.”

Our Lady of the Holy Rosary Church and School were founded in 1959 in Cutler Bay, the first new parish established after the creation of the Diocese of Miami, with Masses celebrated initially in Perrine Elementary School. St. Richard was founded in 1969 and originally celebrated Masses at Coral Reef Elementary School. By 1971, St. Richard had built its rectory and celebrated Mass on the back patio until a multipurpose center was erected. In 1989, a new St. Richard worship space was dedicated — and rededicated in 1993 after extensive damage from Hurricane Andrew.

At Holy Rosary, when Andrew struck many families moved away but the Hispanic population grew. The new church was finally joyfully dedicated in 1995 but soon started leaking. It was ultimately declared unsafe and demolished in 2007. Parishioners worshiped under a tent for months before moving into the banquet hall until the 2010 merger. Our Lady of the Holy Rosary-St. Richard School remains at that Cutler Bay campus. 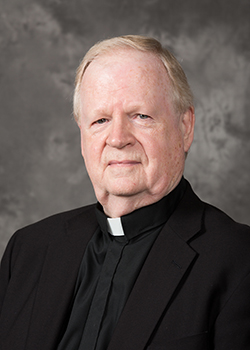 Trinitarian Father William Sullivan is administrator of Our Lady of the Holy Rosary-St. Richard Church in Miami.

Joining Holy Rosary in 1969, Ellen Linardi, 88, recalled how they used to worship in the first floor of the school, and how their excitement for their new church quickly faded.

“We used to play bingo in the hall and if it rained you had to move the tables around a bit. If somebody had an umbrella they’d put it up to try and keep the cards dry,” she said. Later “we had Mass every day in a tent but the people just rolled with it, you didn’t hear anybody complaining. This is what was given to us and we were dealing with.”

Up until the merger, Linardi and others would attend daily Mass and afterwards enjoy coffee and pastries outside, inviting newcomers. “It was just a nice, homey feeling all the time,” she recalled. “I love Cutler Bay, it’s like a neighborhood.”

Linardi and all her friends now attend Holy Rosary-St. Richard and she still loves her supportive community. A widow, she still drives to daily 8 a.m. Mass and especially enjoys first Friday coffee fellowship. “I do like to go to church. It’s a nice way to start the day.”

She’s still active after 50 years in the parish Council of Catholic of Women, which ran a religious gift shop in the old church. Members use to transport children in the 1950s to Sacred Heart School in Homestead before the parish opened. The women are preparing now for the jubilee dinner and festival.

Parish Council president Chris Johnson serves as food chair of the festival, which includes a smorgasbord of cuisines ranging from Peruvian to Colombian, Filipino to Nigerian. His wife Mariela chairs the jubilee committee that has raised funds all year and created a jubilee cookbook of proud parishioners’ coveted recipes — including his Italian beef braciole. Proceeds will benefit embellishment plans for the light, open worship space.

A member since 1995, Johnson first attended a parish council meeting on a whim after the merger and has been serving as president for nearly a decade. One goal is to engage parishioners in ministry. As Catholics, “we’re the sort who go to Mass on Sunday, throw something in the collection plate, go home and call it a week. And it tends to be a Catholic cultural norm going way back. So we’ve really worked hard on doing more ministry, more fellowship events, religious education programs, and that sort of builds community,” said Johnson, whose three children were raised in the church.

Johnson prays to find direction for ministry. “Part of what we’re all supposed to be doing is listening for those ‘here I am moments’ and when you hear the call you want to say ‘here I am.’ You want to make sure you’re always listening.”

Father Sullivan now works to engage parents in the school in parish life and happily reported that enrollment had increased by 40 students for a total of 310.

“It’s difficult to get and to keep the families involved in the parish. They’re involved in the school because of their kids but it’s an obstacle for the school and the parish to be on different sites. But we have an excellent principal, excellent leadership of the school, and we’re working to grow that and we’ve been successful,” Father Sullivan said.

He described the whole community as “anxious to do good,” adding, “we seem to be moving forward with a lot of energy and a lot of enthusiasm.”

For jubilee gala ticket information visit Our Lady of the Holy Rosary-St. Richard at www.hrsrchurch.org or call 305-233-8711.

Other News from Our Lady of the Holy Rosary-St. Richard Church

More articles about Our Lady of the Holy Rosary-St. Richard Church