President, then chancellor, of Barry University for nearly three decades

MIAMI SHORES | Sister Jeanne O'Laughlin, who died June 18 at the age of 90, was an admired figure in education for serving Barry University for nearly three decades — first as president, then as chancellor. But her influence reached far beyond Barry's campus.

Archbishop Thomas Wenski paid homage to her as news spread of her death at her order's health care facility in Adrian, Mich.

"Sister Jeanne O’Laughlin was a force of nature at Barry and in the larger community," Archbishop Wenski said. "She not only took to South Florida — she took South Florida to greater heights, advocating for immigrant rights and the needs of the poor. 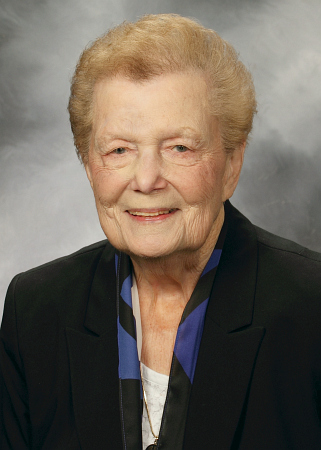 Sister Jeanne O'Laughlin, former president of Barry University, died on June 18. She also was chancellor at the university for another five.

"She made a difference in all of our lives."

Long before she retired in 2004, Sister Jeanne's career and ministry reached near-legendary status:

"She always jumped at the opportunity to help someone in South Florida," said Father Pat O'Neill, ecumenical officer for the archdiocese, who often sat with Sister Jeanne on community boards. "We cherish her, and the memories loom large."

And she was a successful fundraiser, bringing in a total of $200 million for Barry. With the funds, Barry College turned into a university and increased the student body from 1,750 to more than 7,500.

"She was remarkable in her resolve and courage to take the necessary risks to re-fashion Barry," said Sister Linda Bevilacqua, who succeeded Sister Jeanne as Barry's president. "We will be forever indebted to her for building relationships, physical structures and programs that endure to this day.

"There will never be another Sister Jeanne, and we are blessed that she was ours," she concluded.

Born and raised in Detroit to a widowed father, Sister Jeanne joined the Adrian Dominicans at 16, then took her final vows at 21. She earned a doctorate in educational administration at the University of Arizona, then worked as executive assistant to the president of St. Louis University. She also oversaw Adrian Dominican schools in Florida, Illinois and Michigan.

After taking office as president of Barry University in 1981, Sister Jeanne added several schools and worked to broaden diversity among staff, faculty and the student body alike, now representing more than 80 nationalities.

Under Sister Jeanne, the university added 38 buildings, and even 2,000 trees. Off campus, she bought the public radio and TV station WXEL in Palm Beach County, and a law school in Orlando.

And her reach extended even further. One of her first visits in South Florida was to Father O'Neill, who was president of St. Thomas University in Miami Gardens from 1979 to 1988. They sat over drinks — scotch for her, wine for him — and discussed how they could work together.

As he replied, there was a lot. Over the years, they took seats on several commissions to address community issues. Those included fallout from the Mariel boatlift, the McDuffie riots, a wave of drug-related crime, and rebuilding South Florida after the ruinous Hurricane Andrew in 1992.

She showed a knack for getting in the public spotlight — or more precisely, into matters covered by mainstream media, especially immigration and religious freedom. Early in her tenure, she helped the federal Immigration and Naturalization Service to develop a system to track Haitian refugees, allowing 300 of them to be released from the Krome Detention Center.

In 1991, Sister Jeanne heard of three Chinese women who were being held in a hotel at the Miami International Airport, while the U.S. decided if they deserved political asylum. It took about a year — during which Sister Jeanne visited politicians from Miami to Washington, D.C. — but INS finally dropped its opposition.

"Get your stuff ... and let's get out of Dodge!" she famously told the refugees, according to a release from Barry.

She was less successful with the Elian Gonzalez incident in 2000. The 6-year-old, part of an ill-fated raft from Cuba, became the subject of a tug-of-war between his relatives on that island and in Florida. Sister Jeanne first hosted a meeting between the relatives, then advocated for the child to stay in the U.S. — arguing before network cameras and writing a guest column for the New York Times. The American family lost in court, however, and the boy was returned to Cuba.

But setbacks didn’t get Sister Jeanne down for long, Father O'Neill said. "She had an Irish balance. She knew how to celebrate success and failure. That’s extremely important in a leader."

She also showed a more flamboyant side in fundraising. Once, she donned a white satin gown and a feather boa and sang "Don’t Cry For Me, Argentina," for a donation of $1.5 million. Another time, she went ballroom dancing to win $2 million.

But the glitz was a measure of "flexibility," in Father O'Neill's view — an adaptation to the flashier environment of South Florida.

"She realized it was a new frontier, very different from Adrian, Michigan," he explained. "Jeanne saw that to get things done, she would have to go to the marketplace. And she would have to do it within the personality of South Florida."

Sister Jeanne continued working even in the face of lung cancer, first diagnosed in 1996. She coped in typical fashion, helping raise funds and awareness for the American Cancer Society.

She stepped down from the university presidency in 2004, succeeded by Sister Linda. But she returned the following year as chancellor, serving Barry for another five years.

Nor was Sister Jeanne an unsung hero. Among her tributes were honors from Miami-Dade's United Way and Chamber of Commerce, and from the Anti-Defamation League. And in 1992, Pope John Paul II conferred on her the Pro Ecclesia et Pontifice Medal, for her service to the Church.

A prayer service and funeral Mass for Sister Jeanne is set for June 24 and 25 at the Motherhouse of the Dominican Sisters of Adrian, Mich. Barry University will hold its own memorial service for her at a date to be announced. The university also will livestream the funeral Mass in the university's Cor Jesu Chapel, June 25 at 10:30 a.m. 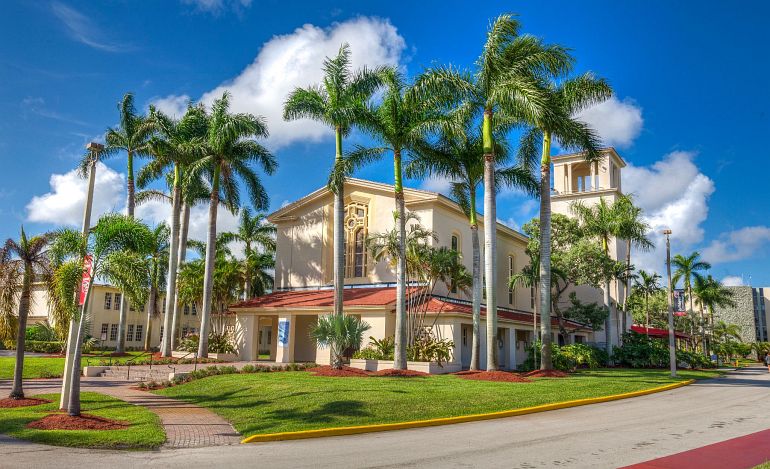 Publicity photo of Barry University, where the late Sister Jeanne O'Laughlin served as president for 23 years and chancellor for another five.

Barbara Romani Carroll - 06/19/2019 03:34 PM
I was blessed to work with Sister Jeanne when I was a Loaned Executive to We Will Rebuild and in my role at Citi . As a member of the Board of We Will Rebuild she was responsible for raising money and overseeing the repair and rebuilding of all the houses of worship no matter what religion . No one would say no to her . A woman of love and service . I know the Lord welcomed her home. Rest In Peace Sister Jeanne . Thank you for making Miami a better community and all those you touched better people .