‘We will miss him,’ archbishop says of Bishop Peter Baldacchino’s appointment to New Mexico 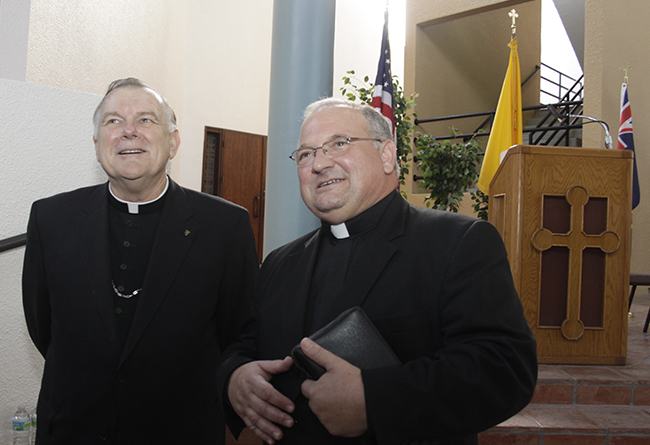 This photo from Feb. 20, 2014, shows Archbishop Thomas Wenski and Bishop Peter Baldacchino the day it was announced that he had been named auxiliary bishop of Miami.

“Today, May 15, at noon, Rome time (6 a.m. Miami time), Pope Francis appointed Most Rev. Peter Baldacchino as the third Bishop of the Diocese of Las Cruces, New Mexico. His installation as the Bishop of Las Cruces will take place on July 23rd at a time and venue still to be announced.

“The Diocese of Las Cruces has an important and rich heritage on which to build. From its early Indian inhabitants through the period of Spanish exploration and Mexican colonization to the present, the diocese has developed a special identity.

“Founded in 1982, there are about 140,000 Catholics in 45 parishes as well as numerous missions in 10 southern counties of the state of New Mexico. Population is overwhelmingly Hispanic (mostly of Mexican descent).

“Bishop Baldacchino has served us well as an auxiliary bishop and pastor of St. Kieran Parish since his ordination as bishop on March 19, 2014. We will miss him; but wish him well. He is a ‘missionary at heart,’ so I am confident that he will serve the people of Las Cruces very well.”

Sister Lidia Valli - 05/15/2019 05:44 PM
Congratulations Bishop Baldacchino. We will accompany your ministry with our grateful love and prayer. From all of us at the Marian Center