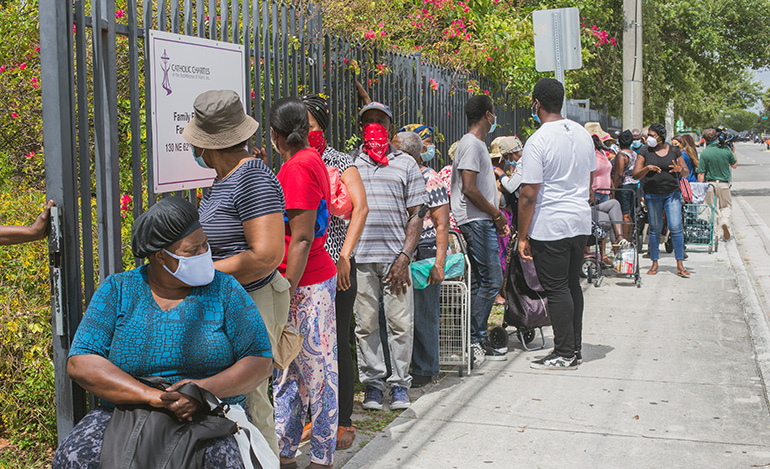 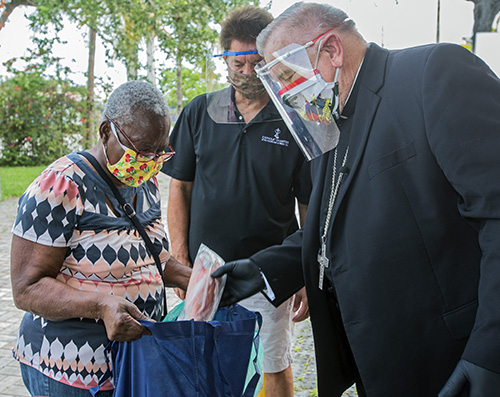 Archbishop Thomas Wenski places fish into a the bag of a food recipient as Catholic Charities CEO Peter Routsis-Arroyo looks on. The archbishop helped Father Reginald Jean-Mary, Notre Dame d'Haiti's pastor, hand out food at the church May 23, 2020.

MIAMI | Archbishop Thomas Wenski stood outside Notre Dame d’Haiti’s parish hall wearing a plastic face shield and mask as he handed out food to those who had stood in line for hours outside a church pedestrian gate.

Among them was Yves Boinelus, 19, and his mother. The archbishop was at the church to show his support.

“There has always been a great need in the Haitian community,” he said. “Now, the need is even greater because of the pandemic.”

This event was part of ongoing food distributions that have been taking place at the church since the crisis began. A similar one April 23, 2020 was drive-through only. This time people without vehicles were able to participate.

Down the street, Fritz Rinnell sat alone in his car and waited at a closed entrance gate for vehicles. He arrived at 9 a.m. and led off a long line of cars that stretched several blocks. The food distribution would start at noon.

“I lost my job as a taxicab driver because of COVID-19,” he said. “I am married with four children and this food will help us.” 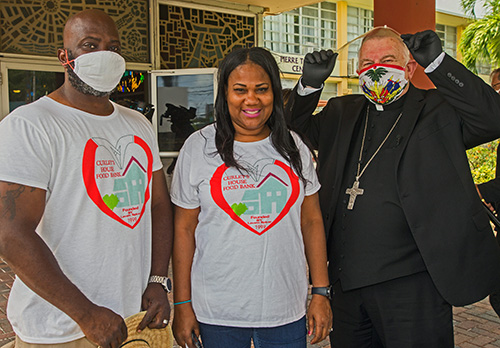 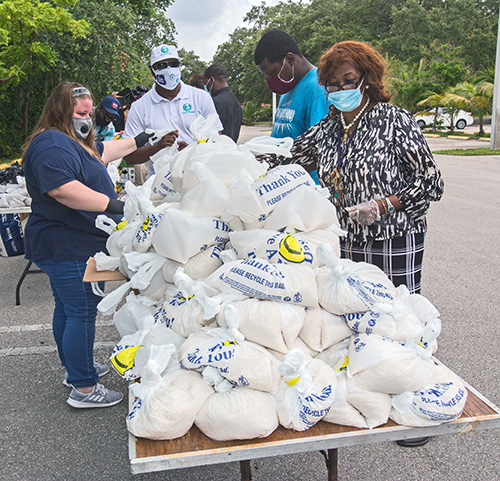 Farm Share sponsored last month’s food distribution. Curley’s House of Style/Hope Relief Food Bank, a grassroots non-profit, sponsored the May 23, 2020 distribution. The organization, which Lavern and Arthur Spicer founded in 1999, is named after Cuzzy “Curley” King, a well-known Liberty City resident who devoted her life to helping the community with many needs, including food and toys.

The organization has a warehouse at 60th Street and Northwest Sixth Court in Miami.

The food that was distributed arrived in a large Hertz rental truck filled with 40 pallets, enough for about 2,000 recipients. The food included fish, rice, fruits, vegetables and drinks. Some hygiene items also were given out.

In addition to the Curley’s House and Farm Share distributions, Notre Dame d’Haiti volunteers cook and package hot meals every Saturday in the parish’s kitchen. They then go out and distribute the food to seniors and others throughout Little Haiti.

Food is the immediate need for now, but paying rent will be another challenge for the unemployed, said Peter Routsis-Arroyo, Catholic Charities CEO, who also was present at the distribution event.

“The pandemic has hit in so many ways, the first need is food,” he said, noting that “the needs at this time are greater than the resources.”

The agency set up a COVID-19 emergency fund which has brought in donations, he added. “But rent may have to be a give-and-take between landlord and tenant. It’s a different place and time with many challenges. A lot will depend on another government stimulus. Let’s hope that the economy picks up as we try to get back to a new normal while observing the Centers for Disease Control guidelines.” 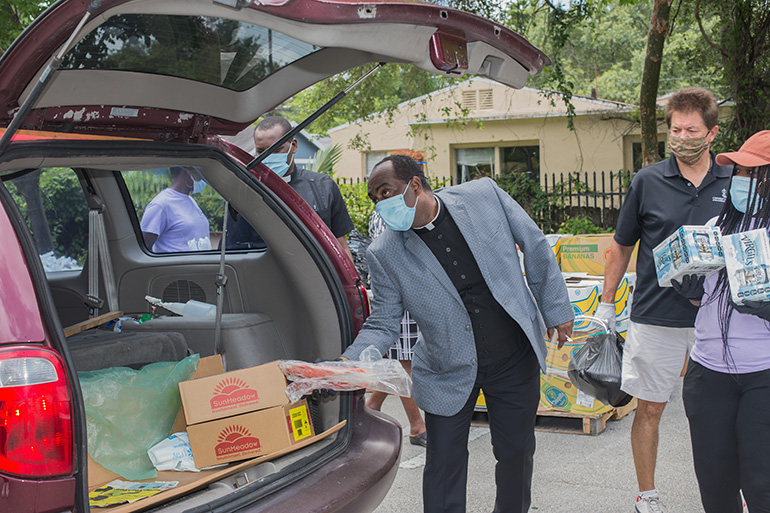 Father Reginald Jean-Mary, Notre Dame d'Haiti's pastor, places a package of fish into an SUV during the May 23, 2020 distribution hosted by his Miami church. Archbishop Thomas Wenski also helped hand out food.