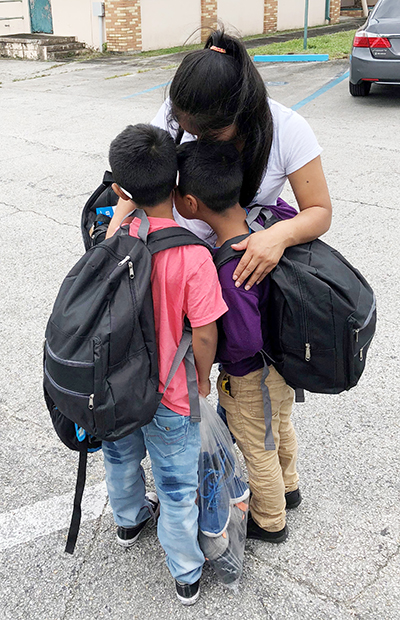 Photo and caption from July 2018: Maria (not her real name) was reunited with her children in Miami after a 49-day separation. They entered the U.S. without authorization and were separated under the Trump administration's short-lived zero tolerance policy. 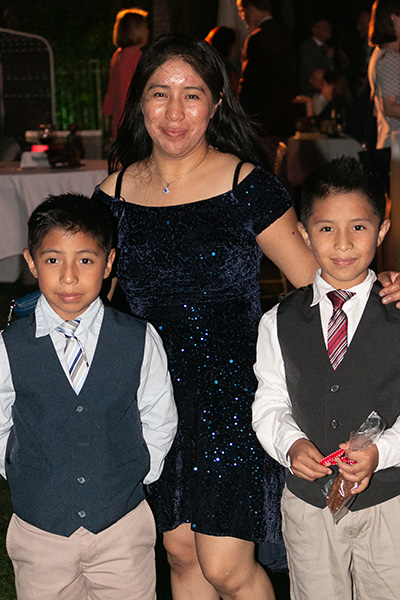 Photo from Nov. 7, 2019: Amalia Itzep, a native of Guatemala, poses with her sons, Juan and Mario Herrera, with whom she was reunited after two months in the summer of 2018. They were detained and separated after crossing the border in Arizona.

MIAMI BEACH | Two pictures tell the story of the work being done by lawyers for Catholic Legal Services of the Archdiocese of Miami.

The first, taken sometime in July 2018, shows a woman tightly hugging two boys, their faces all hidden, huge backpacks forming a cocoon around their waists. The caption says “Maria (not her real name) is reunited with her children in Miami after a 49-day separationÃ¢â¬Â¦”

The second, taken Nov. 7, 2019, shows that same mother with her two boys, all dressed in their finest, smiling for the camera. The caption gives their names: Amalia Itzep and her sons, Juan and Mario Herrera.

The difference in the photos is more than superficial. It marks the distance between being forced to hide for lack of immigration papers, and emerging from the shadows after obtaining legal status. It’s a journey that spanned thousands of miles, many months and dozens of people.

As Channel 10 anchor Eric Yutzy, master of ceremonies for the Nov. 7 Families Reunited fundraiser for Catholic Legal Services, narrated: “Just as Amalia’s family was being torn asunder, another family was being forged, a family of complete strangers, a digital family connected through emails, tweets and an occasional phone call — a modern family, based on the bonds of common humanity, the shared experience of motherhood, of compassion and of a sense of justice.”

Itzep and her boys were caught in the Trump administration’s “zero tolerance” immigration policy. She arrived at the Arizona border from her native Guatemala on May 26, 2018, and was promptly sent to an adult detention facility in Eloy, Arizona. Her sons were sent to the now-closed shelter for unaccompanied minors in Homestead.

Mother and sons were separated for nearly two months. They were reunited through the tireless efforts of Itzep herself; lawyers for Catholic Legal Services and Americans for Immigrant Justice; a federal judge, hearing a separate case, who ordered the government to reunite those who had been separated; and a “chain of mothers” calling themselves Immigrant Families Together.

The groundswell of publicity about Itzep’s case helped raise $26,000: $15,000 that she would need to post bond and leave detention, plus some seed money to start a new life. Immigrant Families Together linked a chain of 10 individuals who drove as long as seven hours in some cases to bring Itzep from Arizona to Miami. The trip took four days. Eleven days later she was hugging her boys.

And that was the easy part. As Yutzy put it, “their next challenge was to fight deportation.” The immigration judge initially held that Itzep was not eligible for asylum. Without a lawyer at her side, that would have been the end of her story.

“A well-reasoned legal brief and zealous advocacy convinced the judge to at least listen to the claim,” Yutzy narrated. At the end of the three-hour hearing, “most of which consisted of Amalia’s powerful testimony,” the immigration judge granted her asylum.

Her sons, then 7 and 8 years old, had to go before a judge as well. Represented by Americans for Immigrant Justice, they also obtained asylum, and “are now part of our family” in South Florida, Yutzy said.

In her brief remarks at the event, Itzep thanked the Catholic Legal Services attorneys who represented her, Kristie-Anne Padron and Renzo Iparraguirre. “They were the people who were with me when I needed them most,” she said through a translator.” 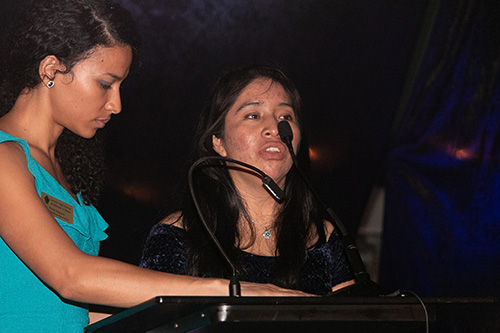 Amalia Itzep, right, who was separated from her two young sons for two months in 2018, thanks Catholic Legal Services for standing by her "when I needed them most" as the agency's Paola Bichara, an immigration specialist, prepares to translate.

Catholic Legal Services is currently working to represent 12,000 minors facing immigration court in South Florida. Every month, the agency’s 28 fulltime attorneys, aided by paralegals and dozens of pro bono partners, see about 3,000 people who hail from as many as 150 different nations. The agency focuses exclusively on helping low-income immigrants obtain asylum, establish legal residency, become citizens and be reunited with their families.

As Archbishop Thomas Wenski put it, Catholic Legal Services serves “the least, the last and the lost. Thank God there are people with a heart for service, a heart for justice and also the brains to give good legal representation.”

Seeing the work of the agency prompted Julie Grimes, managing partner at the Hilton Bentley South Beach, to offer to host the Families United fundraiser, totally free of charge.

“I’m just so grateful that we have an organization like Catholic Legal Services to provide care and representation to so many of our impoverished immigrants and refugees seeking asylum in the U.S., especially in South Florida,” Grimes told the Florida Catholic.

At a time when “people are putting any type of roadblock to keep people out,” she added, “it just becomes more vital to support” the efforts of Catholic Legal Services.

For more information, go to www.cclsmiami.org.