Local Catholics pray at Mass for an ending to epidemic, healing for those affected 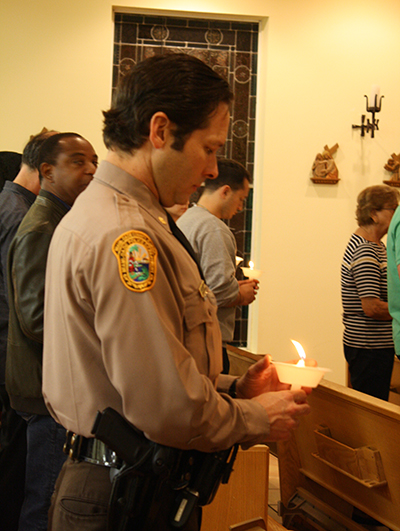 Miami Dade Police Department Major Jesus Ramirez prays for those afflicted by addition during the traditional Latin Mass offered to end the opioid epidemic. The Mass was celebrated at Mission La Milagrosa on Feb. 2, 2018, feast of the Purification of the Blessed Virgin Mary.

MIAMI | The opioid epidemic plaguing the nation is not bypassing Florida: Of the 146 people who died each day in the United States in 2016 from an opioid overdose, 14 are from our state, with Broward County accounting for the lion’s share â one per day, according to the Florida Medical Examiners Commission.

“If dolphins were washing up on the shore, everyone would be up in arms,” said Janet Colbert, a committed Catholic who has been working behind the scene since 2010 to end the opioid crisis in Florida.

It has been an uphill battle but she hopes to engage the Catholic community at large by bringing awareness to bishops, priests and laity, and asking for their prayers and support.

“Being informed is the first step to making change. We need a louder voice on both a state and national level,” said Colbert, quoting Edmund Burke: “All that is necessary for evil to triumph is for good men to do nothing.”

“As the chaplain at Jackson Memorial Hospital, unfortunately I see very frequently young people suffering from an overdose or also dying from it,” said Msgr. Oscar Castañeda, who celebrated a Mass Feb. 2, the feast of the Purification, to pray for an end to the opioid epidemic and healing for those affected by addiction. The Mass took place at La Milagrosa (Miraculous) Mission, part of Corpus Christi Parish in Miami.

“Broward County is the epicenter of the opiate epidemic and we must demand change,” Msgr. Castañeda said, acknowledging the work of Colbert, who founded STOPPNow â an acronym for “Stop the Organized Pill Pushers Now.”

A parishioner of St. David in Davie, Colbert has no prior experience in public policy but starts each day by praying the rosary. (See accompanying story)

“For the most part, it’s been on-the-job training,” said Colbert, who has consecrated her mission to the Blessed Mother. She also invokes St. Michael the Archangel’s protection before every peaceful protest and used to sign all her letters to congressional representatives “Janet Colbert and Michael.”

“Janet is wrapping her angel wings around so many people,” said Colbert’s friend and fellow Why Catholic? participant, Valerie Panciera, owner of Landmark Funeral Home in Hollywood. 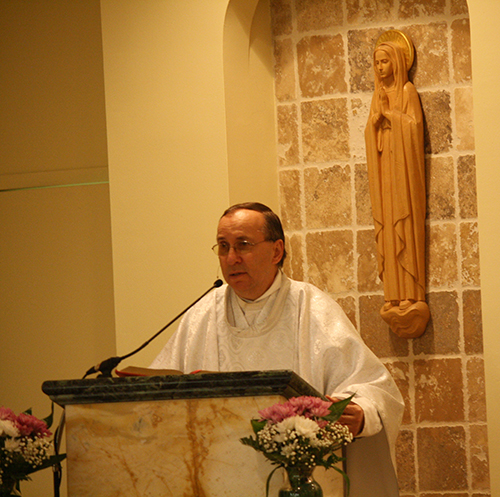 “As the chaplain at Jackson Memorial Hospital, unfortunately I see very frequently young people suffering from an overdose or also dying from it,” said Msgr. Oscar Castaneda during a Mass he offered in the extraordinary form of the Latin rite to end the opioid epidemic and pray for those affected by addiction.

Panciera and her husband, Kevin Rieth, Landmark funeral director, counsel and give bereavement support to clients at the funeral home. The couple are parishioners at Nativity Church in Hollywood.

They too have witnessed the mounting numbers of overdoses due to opioid addiction. The beginning of 2017 was just terrible, said Rieth, citing more opioid deaths in the first six months of 2017 than the last five years.

“That’s just our funeral home, I can’t imagine what is going on countywide,” he said, adding that opioids don’t discriminate based on age, race or socio-economic status.

“Opioids are potent and poisonous. We see the death certificate. The overdose could be from one drug or five or six mixed together. I don’t think people know what they are buying off the street,” Rieth said.

Aside from their ability to destroy people’s health, marriages, families and professions, opioids also destroy people’s spiritual life, said Msgr. Castañeda. “Drug addiction also becomes a spiritual disease and an emotional disease,” he said, estimating that at least 60 percent of those behind bars are in one way or another related to drug abuse or alcohol.

“All across our nation, individuals, families, and communities are struggling to cope with the realities of substance abuse, misuse, and disorders,” said Major Jesus Ramirez of the Miami-Dade Police Department, who attended the Feb. 2 Mass. “Miami-Dade County and its diverse communities are no exception.”

He noted that first responders have been instrumental in saving lives by responding to opioid overdoses and providing life-saving medical assistance. However, he said, what’s needed are more “proactive holistic” strategies efforts to raise awareness and prevent addiction.

The Miami-Dade Police Department and other law enforcement agencies are creating and expanding partnerships with other organizations to increase enforcement and reduce the excessive supply of opioids.

Colbert said the biggest obstacle right now are politicians who are unable to pass laws that would result in change, “because the drug companies are the biggest lobbyists.”

Msgr. Castañeda closed his homily on a hopeful note about the power of faith. “So we see how powerful God is. Sometimes what we cannot do on our own or what we pretend we can do by ourselves is not possible, but with God, all things are possible.” 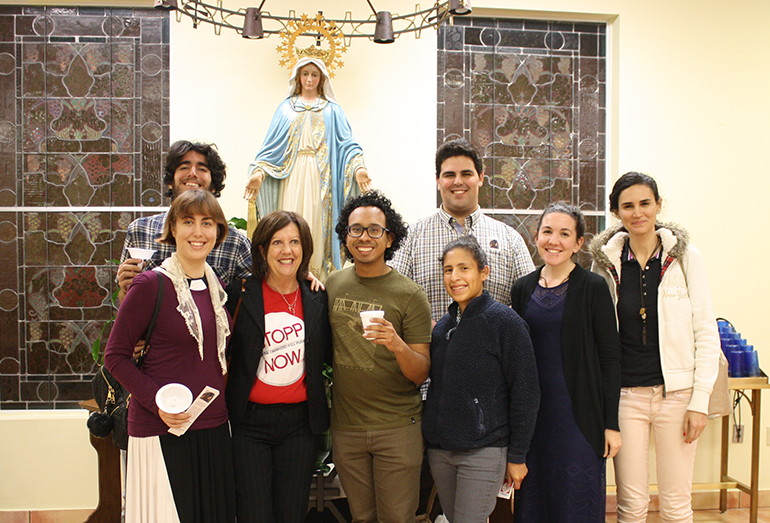