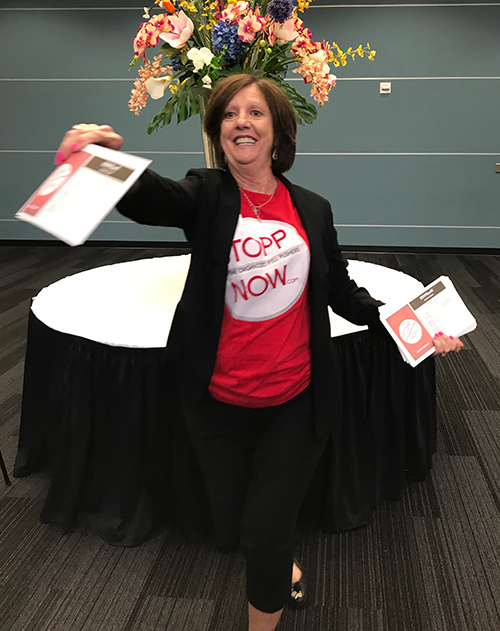 Opioid activist and STOPPNow author Janet Colbert hands out flyers at the Broward County Opioid Epidemic Town Hall Meeting in August 2017. Colbert, a St. David's parishioner and retired neonatal intensive care nurse, championed the cause to end the opioid epidemic and founded STOPPNow in 2011 in response to the drug addicted babies she was caring for at Joe DiMaggio Children's Hospital.

MIAMI | Since her retirement as a neonatal intensive care nurse at Joe DiMaggio Children’s Hospital in Broward County, St. David parishioner Janet Colbert has been clutching her rosary, praying for the Blessed Mother’s intercession to end the opioid epidemic plaguing the nation.

But since “faith without works is dead,” in 2011 she founded a non-profit organization to raise awareness of the growing problem. Her new uniform is a bright red T-shirt boldly displaying her logo, a giant white circle depicting the controversial pain pill, oxycodone, with her organization’s name STOPPNow (Stop the Organized Pill Pushers Now) written across the pill.

Colbert’s lobbying efforts began in response to the drug-addicted babies â technically born with Neonatal Abstinence Syndrome â that she was caring for at the hospital in 2009. Overwhelmed, she said she could not sit and watch without doing anything.

At the same time, her dear friend Renee Doyle’s two sons, Cory and Blayne Lewis, were experiencing the ravages of opioid addiction, which likely contributed to Blayne’s tragic death. (See accompanying story) Through their involvement with unscrupulous pain clinics, Colbert learned about the notorious pill mills in Broward County.

“I promised Renee that I would help her do something so that Blayne’s death would not be in vain,” Colbert said. So she immediately began writing letters to Tallahassee alerting them to the problem.

In addition to calling and emailing state legislators, she self-financed several lobbying trips to Washington D.C. and Tallahassee. She also attends the annual Fed Up Rally, a meeting in Washington, D.C., of a grass-roots coalition that seeks action from the federal government to end the opioid epidemic.

“We weren’t known for our beaches anymore,” Colbert said of this area, notoriously dubbed “Oxy Express” due to the ease of obtaining prescriptions for oxycodone. Those lax laws enabled people, mostly from Appalachia, to come to southeast Florida to fuel their addiction.

In 2010, the Drug Enforcement Administration reported that 98 of the top 100 oxycodone dispensing physicians in the nation were in Florida. A grand jury investigation also cited this figure to show that the number of pain clinics in Broward County outpaced the number of McDonald’s fast-food restaurants. During that time, opioids claimed seven deaths a day.

Colbert found that out and more while doing research for her recently published book, STOPPNow, which she dedicated to all the parents who have lost their children. She wrote it, she said, “to promote awareness of what caused the opiate epidemic, the greed and corruption that continue to fuel it, and the great harm the opiate epidemic is causing to our communities, our state, and our nation.”

At the start of the 2018 legislative session, Florida’s bishops also identified as one of their legislative priorities, “Advancing efforts that strengthen community-based mental health and substance abuse services and policies, especially as they relate to the opioid epidemic.”

Recognizing that the overprescribing of opiates by physicians is the root cause of the problem, Colbert directed her lobbying efforts to Florida Senate Bill 8 and House Bill 21. HB21 passed unanimously this March and was signed into law by Gov. Rick Scott. 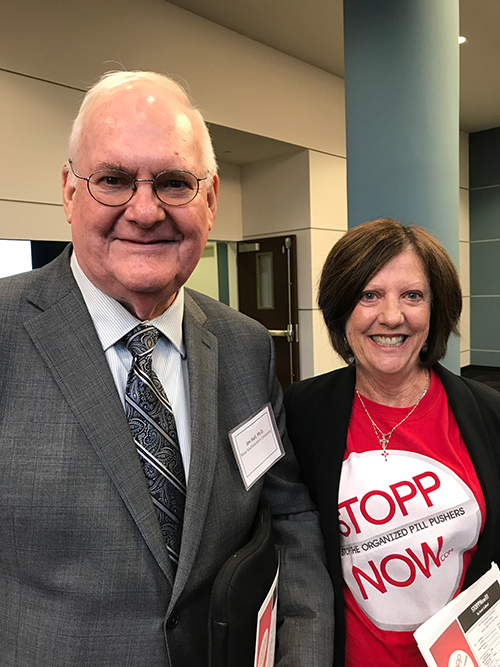 The measure imposes a three-day limit on most opioid prescriptions, although doctors can provide a seven-day supply if it is deemed medically necessary. The prescribing limit does not apply to patients with pain related to “cancer, terminal illness, palliative care or serious traumatic injuries.” The law also requires doctors to check Florida's Prescription Drug Monitoring Program to prevent patients from “doctor shopping” for prescriptions.

“It will help curtail new addictions by limiting opiate prescribing during the acute phase of an illness,” where many addictions start, said Colbert.

Despite all these efforts, however, the epidemic has expanded. It now includes heroin, illicitly manufactured fentanyl and its analogs, which account for most of the 14 statewide deaths per day in Florida, according to the Florida Medical Examiners Commission most recent annual report, for 2016.

Jim Hall, a nationally recognized epidemiologist, said “Janet has done a marvelous job of creating a clear and historical record. One incredible and fascinating device is how she used actual emails to document the history of her efforts in shutting down pill mills in the last decade.”

Hall himself provided the precise analysis that formed the backbone of news reporting on the opioid epidemic, as well as the flakka crisis that plagued Broward County in 2015.

“STOPPNow identifies how Congress had removed the power of the DEA to control the widescale illegal distribution and enforce regulations,” Hall said. He noted that Republican Rep. Tom Marino of Pennsylvania, who was nominated to be the “drug czar,” or director of the Office of National Drug Control Policy, sponsored the bill.

“However, his nomination was quickly rescinded after it was revealed that he had ties to the drug industry. But Janet told it in the book before the Washington Post or 60 Minutes told the story,” Hall said.

While there is no simple solution, Colbert’s efforts at exposing the fraud were groundbreaking, said Hall. Now, multidisciplinary coalitions replicated throughout the state of Florida are vigorously addressing the many facets of the problem, which include alternative options for pain management, treatment for those suffering from opioid use disorder and supply reduction.

Hall recently relocated to his home town of West Virginia, the new ground zero for the nation’s opioid crisis, to implement a similar community action infrastructure.

The local community also recognized her efforts in addressing the opioid crisis. In 2017, she was named one the 100 Most Outstanding Women of Broward County by the Boys & Girls Clubs.

Colbert says she will continue to work on behalf of the crying babies who cannot speak or vote, as well as the grieving families of those lost to addiction.

“There is much left to be done to help those who have already succumbed to the highly addictive pain pill,” she said. “Every time another baby is born into this torture of withdrawal, I ask, Why does their life not matter?”

As she prays the rosary each morning, she also tells the Blessed Mother, “Look at all these mothers burying their children. Please help me stop this.”

For more information about joining Colbert in her crusade, visit stoppnow.com, email [email protected], or follow her on Facebook at StoppNow.