March for Life - beyond D.C.

More cities - including in Florida - to host pro-life marches

Chris Covone, far right, director of Campus Ministry at Archbishop Edward McCarthy High School, poses with students before starting the Walk for Life at the school Jan. 14, 2017. The school will host this year's walk on Saturday, Jan. 18.

DENVER | While hundreds of thousands of pro-life advocates — including a 150-plus contingent of high school students and young adults from the Archdiocese of Miami — will gather in Washington, D.C. for the National March for Life this Jan. 24, thousands will attend similar events in St. Augustine, and in major cities like Los Angeles, Chicago and Denver.

In Florida, pilgrims can gather for the March for Life St. Augustine Jan. 17-18. Developed to uplift and create awareness for the sanctity of human life, the first March was celebrated in January 2007, to coincide with the National March for Life, so that those advocates who cannot travel to Washington, D.C. can celebrate life closer to home. While it started with more than 700 people of many different faiths, backgrounds and ages, recent marches have drawn nearly 3,000 people, from across Florida and Georgia. 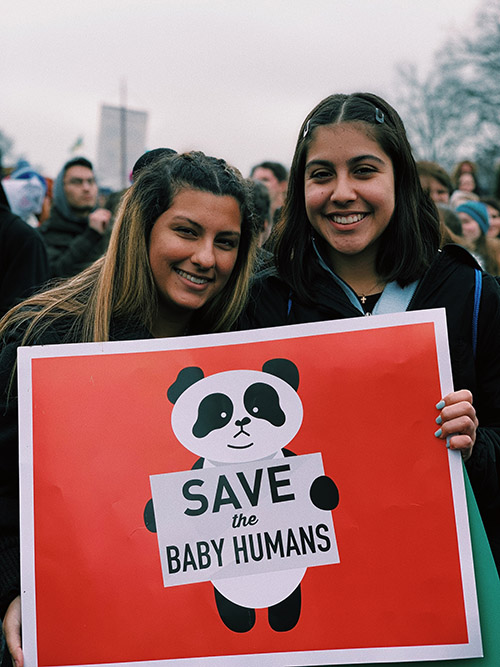 Students Lucy Weiss and Kayla Vergara, of Chaminade-Madonna College Prep in Hollywood, made their voices heard at the March for Life in Washington, D.C., Jan. 18, 2019.

The St. Augustine march, along with others across the United States, will address serious subjects, but some events will also take on a celebratory air, aiming to convey the joy of human life.

In St. Augustine, the two-day event will kick off at Our Lady of La Leche Church on San Marco Avenue for an evening of prayer, praise and worship and food trucks. The next morning, Jan. 18, will include an outdoor Mass at the historic site with Bishop Felipe Estevez, live music, information booths, and the procession through the streets of St. Augustine.

Afterwards, pilgrims can listen to speakers, including Doug Tooke, vice president of ministry advancement for ODB Films in Los Angeles, and Ryan Neuhaus, Florida regional coordinator for Student for Life of America. Tooke also serves as an adjunct staff member with Life Teen International, and Neuhaus spoke at the Florida Respect Life Conference this past October.

A spaghetti dinner prepared by the Knights of Columbus will conclude the event, allowing for fellowship among the thousands of participants.

In Los Angeles, OneLifeLA’s Sixth Annual Walk for Life will take place Jan. 18, beginning with a young adult rally, and culminating in a festival, and even an official after-party.

Participants will walk from the rally site through city streets to Los Angeles State Historical Park, the venue for a pro-life festival and food trucks. The event will have a children’s area with face painting, balloon art and space for frisbee games.

The Cathedral of Our Lady of the Angels will host a requiem Mass for the unborn, before events conclude with a young adult after-party at the Imperial Western Terminal at Union Station. 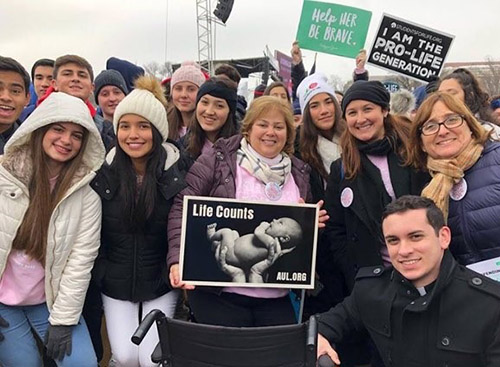 Father Michael Garcia, archdiocesan chaplain for the high school contingent to the 2019 March for Life, bottom right, poses with a group of students from Our Lady of Lourdes Academy and St. Brendan High School in Miami, along with Lourdes chaperones Martica Castellanos, center, and Maria Romero, second from right, as well as St. Brendan chaperone Rosa Mari Alvarez, far right.

The rally’s keynote speaker is sex trafficking survivor and criminal justice reform advocate Cyntoia Brown-Long. The event will also feature musical guests, including the group Love and the Outcome and singer-songwriter Francis Cabildo.

Kathleen Buckley Domingo, senior director of the Office of Life, Justice and Peace for the Archdiocese of Los Angeles, reflected on this year’s theme: “One Mission, One Family.”

“The goal is always to get people to recognize our mission and do it all year-round, a groundswell of action in the community that loves, cherishes, and respects every single person, and doing it as part of one extended family. We want this to feel as if it’s our own family reunion, and a time to tell our family stories.”

The March for Life Chicago, held Jan. 11, bills itself as the largest pro-life event in the Midwest. Last year’s event drew about 8,000 attendees. The theme is “Life Empowers: Pro-Life is Pro-Woman.”

Keynote speaker for the Chicago rally is Claire Culwell, who survived the abortion procedure that killed her twin sister, and was born two months premature. She was adopted after birth and reconnected with her birth mother in 2009. 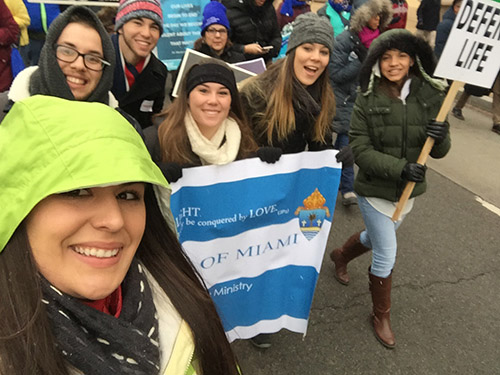 A selfie during the March for Life 2016 from the young adult members of Ablaze at Immaculate Conception Church in Hialeah.

Political figures to speak at the event include U.S. Rep. Dan Lipinski of Illinois, one of the few remaining pro-life Democrats in Congress, who narrowly won a primary victory in 2018. U.S. Rep. Darin LaHood (R-Ill.) will also speak.

Cardinal Blase Cupich of Chicago is among the speakers, as is Rev. Dr. Matthew Harrison, president of the Lutheran Church Missouri Synod.

Morning and evening convention sessions at Congress Plaza Hotel will feature pro-life organizations from across the U.S. At the hotel there will be a morning youth rally, a Catholic Mass, as well as an evening banquet and a swing dance for young adult attendees.

In 2019, Illinois lawmakers passed legislation to declare abortion a “fundamental right.” It removed several abortion laws from the state code, including a ban on partial-birth abortion, required waiting periods for an abortion, and regulations on abortion clinics. Illinois’ Catholic bishops criticized the goals of the bill and the manner of its passing, without hearings or the public release of the final text in the final days of the legislative session.

In all the Dioceses of the United States of America, Jan. 22 (or Jan. 23, when Jan. 22 falls on a Sunday) is observed as a particular day of prayer for the full restoration of the legal guarantee of the right to life and of penance for violations to the dignity of the human person committed through acts of abortion. As individuals, we are called to observe this day through the penitential practices of prayer, fasting and/or almsgiving. The USCCB also sponsors an annual, nationwide novena called “9 Days for Life,” which surrounds the liturgical observance of the Day of Prayer. Each day for nine days, a different intention is featured, accompanied by a short reflection, suggested actions, and related information as we pray for the respect and protection of every human life. In 2020, the novena will take place Tuesday, Jan. 21 – Wednesday, Jan. 29.

“Furious that Illinois legislators have made this state an abortion oasis for the Midwest, pro-life advocates from across the country are empowered to come together in a joyful gathering knowing we can build a brighter future,” Fitzpatrick said Nov. 22. “More people than ever plan to turn out for the March for Life Chicago.”

This year’s pro-life events are significantly larger in scope, she said.

“This expansion gives participants the opportunity to connect with companies, organizations, and other individuals from across the country who share their values. Now, they will depart ready to take further action in their own communities,” said Fitzpatrick, who is also senior coordinator for Respect Life Ministries at the Chicago archdiocese.

In Colorado, Catholic Charities of Denver’s Respect Life office organized the Jan. 11 Celebrate Life Rally and March. The rally will begin on the west steps of the state capitol in Denver followed by a march around Civic Center Park. 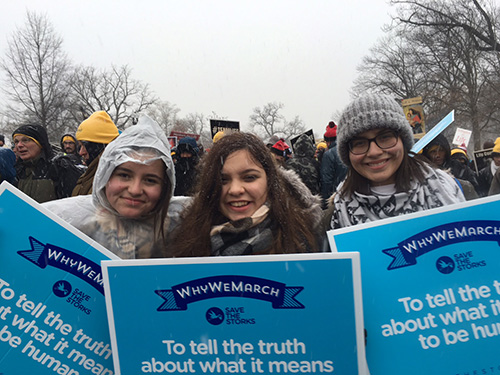 The event will begin with several morning Masses in the area, including one at the nearby Cathedral of the Immaculate Conception.

The Denver event aims to emphasize a proposed 2020 ballot measure known as Initiative 120, which will ban late term abortions 22 weeks into pregnancy, with exemptions for pregnancies that endanger a woman's life.

“I urge all Catholics to get involved in this effort!” Archbishop Aquila said Jan. 7. “We must not let up in our efforts to ensure that the goodness of every human life is respected in our laws, our churches and our families.”

Backers of the proposal must collect over 124,000 signatures by March 4 in order to qualify for the November 2020 election ballot.

In Richmond, Virginia, the second annual Virginia March for Life is scheduled for Feb. 13 at the state capitol. The state event was launched last year in response to abortion legislation in the state legislature, including a bill that its own sponsor admitted could allow abortion up to birth.

The Texas Rally for Life, held in Austin Jan. 25, includes a walk to the capitol at 1 p.m., a rally at the capitol at 2 p.m., followed by a pro-life expo on the Great Walk of the Capitol Grounds. Organizers estimated 10,000 people attended last year.

In addition to taking part in the March for Life in Washington, D.C., Catholics in the Archdiocese of Miami have a tradition of “walking for life” around the anniversary of Roe v. Wade. These walks also serve as fundraisers for the five Pregnancy Help Centers located in South Florida. If you can’t get to D.C. or St. Augustine, consider taking part in these “walks for life”: