Columbus names science and arts center for class of '91 entrepreneurs 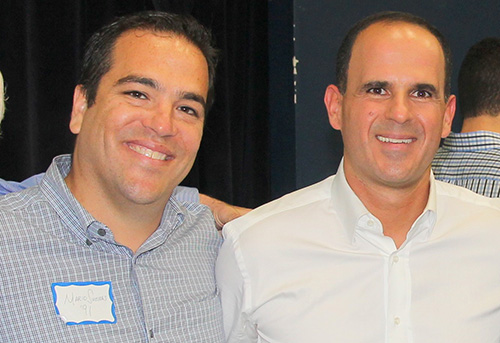 Mario Sueiras, left, and Marcus Lemonis, classmates from the Christopher Columbus High School class of 1991 and childhood friends, have pledged a significant amount toward the construction of a new science and arts center at the high school. The center will now be named after them. 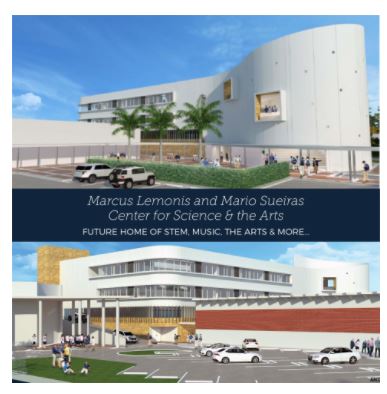 Architect's rendering of the planned new science and arts center at Christopher Columbus High School, which will be named for 1991 alumni and childhood friends Mario Sueiras and Marcus Lemonis.

MIAMI | Christopher Columbus High School will name its new Center for Science and the Arts after alumni Marcus Lemonis and Mario Sueiras, childhood friends from the class of 1991 who have made a generous gift to the school.

Lemonis, a serial entrepreneur, television personality and philanthropist, is one of the most sought-after industry experts in the small business sector today. He is the chairman and CEO of the nation’s leading RV retailer, Camping World, and is host of CNBC’s “The Profit,” where he lends his expertise to struggling businesses across the nation.

Inducted into the Columbus Hall of Fame in 2015, his popular “Lemonis Challenge” has inspired thousands of alumni to give to the Columbus development program in recent years.

Sueiras is a long-time insurance industry professional who has headed the Miami GEICO office for the last 12 years. Under his direction, his office has experienced steady sales growth. He also has supported several local community organizations. Prior to joining the insurance industry, Sueiras worked as a teacher in Miami-Dade Public Schools. He is a Columbus parent and proud father of two children.

Both Lemonis and Sueiras credit their time at Columbus with giving them a solid foundation for succeeding in life and for helping them be the men they are today.

“Columbus gave me the confidence to be myself, and to take chances,” said Lemonis. “There’s a special magic that is found in this school and I want to help generations of young men to experience it.”

“We are so grateful to Marcus and Mario for this extraordinary support. They exemplify the strong brotherhood spirit of Columbus and the deep ties that bind us,” said Thomas Kruczek, Columbus' president. “Their generosity will build a legacy for the future. We are honored that this building will bear their names and serve as inspiration for future generations of Explorers.”

Columbus has long been focused on initiatives that promote an interdisciplinary approach to STEM education across all curriculum. “The new center will provide students with the ideal space and resources to foster STEM skills, such as critical thinking, communication and creativity, which are essential for their future success,” said Mercy Aycart, Science Department chairperson.

Wednesday, 26 Aug 2020
'It's so weird' but school is in session throughout the archdiocese