WILTON MANORS | As the COVID-19 pandemic ramps up, the State of Florida has been providing Catholic Charities of the Archdiocese of Miami with meals ready to eat (MREs), in order to augment food distribution programs already in place.

Peter Routsis-Arroyo, CEO of Catholic Charities, said in a phone call March 30, 2020 that the state’s Emergency Management Operations Center has released MREs normally allocated for natural disasters to be given to families in need. The state did so at the behest of the emergency management specialist of the Florida Catholic Conference in Tallahassee.

The COVID-19 pandemic and its economic fallout have begun to create ripple effects in the greater South Florida region, which government officials worry is a growing pandemic hot spot and now under stay-at-home orders.

“It has become obvious to us that fear, panic and unemployment (are) already raising the anxiety level of the community,” Routsis-Arroyo said. 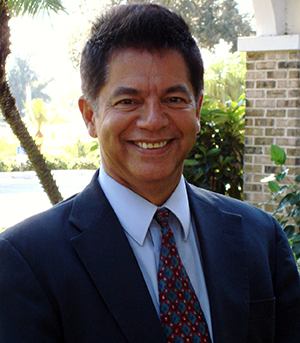 Peter Routsis-Arroyo is CEO of Catholic Charities in the Archdiocese of Miami.

The change to delivered meals also applies to Catholic Charities-affiliated adult day care centers in Broward County which help disabled adults and seniors who require care during the day.

Both Charities staff and outsourced catering agencies are undertaking the food-delivery legwork.

“People see us delivering shelf-stable meals, so as we make rounds for our shut-ins, we are coming across people who are legitimately in need of food and we are making MREs available,” Routsis-Arroyo said.

“We are limited in what we can give out in terms of (emergency food) gift cards,” he noted, but seeing the need out there “we are making those (MREs) available.”

In addition, Routsis-Arroyo said Catholic Charities’ Head Start program was providing client families with take-away meals and online learning assignments for students now shuttered at home. Other families are coming by for meals and Catholic Charities is trying to accommodate those additional requests, he said.

The coronavirus outbreak could cost 47 million jobs next quarter, according to a new report by economists at the Federal Reserve Bank of St. Louis in Missouri. That translates to an unemployment rate of 32.1%, well above the 24.9% rate of unemployment during the worst of the Great Depression.

“This pandemic is a new situation for everyone and there is concern that there be no duplication of services,” Routsis-Arroyo said. But another concern at the state emergency operations level is that in a couple of months another hurricane season will begin.

“Normally that is when they have their stockpile of MREs ready to go, but as the magnitude of this keeps hitting home in terms of food insecurity it may be a major challenge,” Routsis-Arroyo said.

Catholic Charities Miami has shifted some of its staff to assist with the meals distribution programs at the same time it had to halt a number of community programs that cannot operate under the social distancing requirements statewide.

Residential programs in Miami, including St. Luke's Center for alcohol and substance abuse treatment and New Life Family Center, an emergency homeless shelter, continue to house their clients on site and are taking additional safety measures to protect residents and staff.

None of the nearly 500 Catholic Charities staff have been furloughed due to the crisis. Routsis-Arroyo said he is hoping that will remain the case.

“We have not laid anybody off right now and, God willing, our plan is not to do that,” he said, adding that the $2 trillion economic stimulus plan that U.S. lawmakers just passed may provide some emergency funding.

“There might be some help for agencies such as ours to keep our staff and maybe get some reimbursements for staffing, but right now we have no plans to lay anybody off,” he said.

Another short-term goal for Catholic Charities is to acquire personal protection safety masks for staff and clients in the residential programming locations as a safeguard against COVID-19. Routsis-Arroyo is seeking help from Catholic Charities USA and other sources for the safety equipment, “although we don't want to take away from the frontline healthcare workers,” he said.

The Village of Miami Shores recently helped when its police department contacted the archdiocese with an offer of 3,600 donated latex gloves. The archdiocese donated 1,000 of them to Catholic Charities and the remaining 2,600 to Catholic Health Services’ Villa Maria Nursing and Rehabilitation Center in North Miami.

“We are not healthcare providers doing the incredible work at hospitals but we are out there as well doing our job with clients and really not knowing what their situations are, so we are working with our national organization to hopefully get some masks — that has been a challenge throughout the entire country,” Routsis-Arroyo said.

Routsis-Arroyo said Catholic Charities counselors have transitioned to a telehealth format for one-on-one and group therapy, for an increased measure of social distancing during counseling services.

He said he expects to see the pandemic and economic downturn result in a degree of emotional trauma this year.

“With major layoffs going on, people's realities have gone from optimistic to all of a sudden, how am I going to pay my bills and keep my family going in the span of two weeks,” Routsis-Arroyo said.

All the Catholic Charities agencies of the state of Florida are in regular communication over the pandemic and review the situation during a Friday directors’ conference call, he added.