A wake will take place at the church beginning at 9 a.m., with the funeral Mass celebrated immediately after at 11 a.m. Burial will follow at Our Lady of Mercy Cemetery in Doral.

Father Elbert, who retired from active ministry in May 2018, died sometime before Thanksgiving at his apartment. His brother, Donald Elbert, found him Nov. 25, 2020.

"I came in to do a wellness check when he didn't answer and when I walked in, he looked like he was just sleeping. We're thankful that it was a peaceful passage," Donald Elbert told the Florida Catholic. 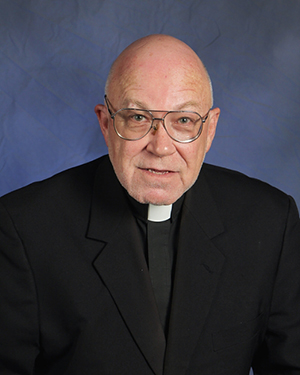 He said his brother, who died just a few weeks before his 73rd birthday, had undergone major heart surgery five years ago and suffered from emphysema. Father Elbert had been a priest for 47 years, all of them in the Archdiocese of Miami.

Aside from the priesthood, Elbert said, his brother loved two things: "Read books and talk."

He called Father Elbert, who also learned to speak Spanish, "a walking encyclopedia. He knew more about every subject than anybody else who was an expert in it."

In fact, Elbert added, "He's probably now telling God that here's what he should do."

Still, his brother noted, "even with the knowledge he acquired throughout his life, he still remained a caring soul dedicated to help others."

Born in Miami Dec. 10, 1947, William A. Elbert was the eldest of four children, three boys and a girl. He attended Corpus Christi School and entered St. John Vianney — then a high school seminary — right after graduating from eighth grade in 1960. He would return there to teach from 1988 to 1996.

In a June 2018 article in the Florida Catholic, Father Elbert credited his parents for encouraging his vocation, but said the Franciscan Sisters of Allegany New York, who staffed Corpus Christi School at the time, played a significant role. “I almost decided to become a Franciscan back then,” said Father Elbert.

As South Florida’s population grew in the 1950s and ‘60s, he also remembered his pastor, the late Msgr. Joseph H. O’Shea, pointing out that “we desperately needed more diocesan priests for our exploding population in Miami.”

He also taught at Our Lady of Lourdes Academy from 1976 to 1982 and at Msgr. Edward Pace High School in Miami Gardens from 1982 to 1986, while in residence at Immaculate Conception in Hialeah.

Sent for higher studies from 1986 to 1988, he returned to teach at St. John Vianney until 1996, when he took a months-long sabbatical. He returned to serve as parochial vicar at St. John the Apostle in Hialeah from February 1997 to January 2000, when he was named administrator, and later pastor, of St. Lawrence.

In addition to his brother Donald, Father Elbert is survived by another brother, Thomas, who lives in Woodbury, Minnesota, and a sister, Susan, who lives in Cape Coral, Florida; as well as many nieces and nephews.

This article has been updated with additional information.

Jim Assalone & Family - 11/29/2020 05:39 PM
Fr Billy was the Best. The best part of our childhood has passed with him. Brilliant and Kind come to mind. He was fantastic with the deaths of my parents and 2 of my 5 sisters. All of us go back to the 1950's and first grade at Corpus Christi. It was a time not too long ago in years but what seems like an eternity for objective reality, truth, respect, reverence, and ...that foreign forgotten ignored and displaced word "Holiness". Fr Billy was one of a kind. He was a living encyclopedia of all things decent in our lives and the "Historian" of our childhood and neighborhood. He was perfectly suited for the involuntary task...His "Mind, Memory, Writing and Speaking"....endless stories..brought with it warmth, laughs, and tears. You can't replace his knowledge, wit, wisdom, kindness, and priestly holiness wrapped in common-sense. In this crazy world that worships Man before God and puts Feelings over Facts, the priestly tonic of "Father Billy" will be sorely missed. He is home. May he rest in peace.

Jaime C Angeles - 11/28/2020 11:12 PM
Thank you, Father Elbert! My family and I remember you very well for your wisdom, your dedication to Our Lord, your words and your masses, where I learnt so much about our Catholic faith. I will specially remember your words:Carry your cross. And your advice regarding the passing of a loved one: What are YOU going to do with the time you have left on this Earth? We missed you since you retired from St. Lawrence and we will miss you more now. Thank you, Father Elbert, rest in peace and may The Lord be with you.

Edna Gritz - 11/28/2020 07:50 AM
Father Elbert was an incredible human being, one of a kind. His knowledge, his faith... An example of a good servant of God. A true and valuable Priest. He was a very important part of my family life for 18 years. My honor, my respect, my admiration, my gratitude. He will be missed. May you Rest In Peace with all the Angels and with all the Saints whom you’ve known so well. God’s army has gotten stronger now. In Jesus name I pray for you.ðð¼

Maria Elena Corrales - 11/27/2020 06:19 PM
My most humble feelings about our old Pastor of St Lawrence Catholic Church having served with him on our Sunday Masses my husband Carlos and I will remember him always he was a very well versed man and May Our Lord Jesus bring him home to rest! For ever Rest In Peace Father Elbert.