Make the beatitudes your attitudes

Archbishop Thomas Wenski preached this homily while presiding at the International Mass at St. Pius X Basilica in Lourdes, France, July 3, 2019. The archbishop is on pilgrimage with a group from Our Lady of Lourdes Parish in Miami, to assist with “hospitalité” at the shrine.

“Blessed are the poor in spirit; the kingdom of heaven is theirs.” In today’s Gospel reading, we find Jesus preaching on the mountain. Like Moses — the lawgiver of the Old Testament — who went up Mount Sinai and came down with the Ten Commandments — Jesus goes up a mountain to give us the new law of the New Testament. In his Sermon on the Mount he delivers a new law, the law of love, expressed in the Beatitudes. Jesus himself embodies the beatitudes for they express his attitude, lived out in his own life, and in doing so they shed light on what are to be the actions and dispositions characteristic of the life of those called by grace to be Christians. In other words, the Beatitudes must be the attitudes of every Christian as he or she follows Christ on his or her earthly pilgrimage.

To put it in another way, as the Fathers of the Second Vatican Council did, the entire community of the baptized is called to holiness. This call to holiness is not just for a few rare individuals but for each one of us. St. Paul tells us in today’s second reading: “Consider you own calling, brother and sisters. Not many of you were wise by human standards, not many were powerful, not many were of noble birth. Rather,” he continues, “God chose the foolish of the world to shame the wise, and God chose the weak of the world to shame the strong, and God chose the lowly and despised of the world, those who count for nothing, to reduce to nothing those who are somethingÃ¢â¬Â¦”

This is why, if we boast, we should boast in the Lord. For we are not called to faith in Christ because we were the best or the smartest. God doesn’t call the most qualified (for our own sins would disqualify us); but he does, in his mercy, qualify the called through the forgiveness of our sins. This is why we can say that we, Christians, are not perfect — just forgiven; and that, because of Jesus Christ who suffered and died for us, we can say that every saint — except the Immaculate Virgin — has a past; and every sinner has a future. That future is found in the promises given to us in these Beatitudes, and these promises — as paradoxical as they may seem — sustain our hope in the midst of all the tribulations we endure as we make our pilgrimage through this “vale of tears” to our heavenly home. Again, as St. Paul tells us, it is due to God that we are “in Christ Jesus, who became for us wisdom from God, as well as righteousness, sanctification, and redemption.” 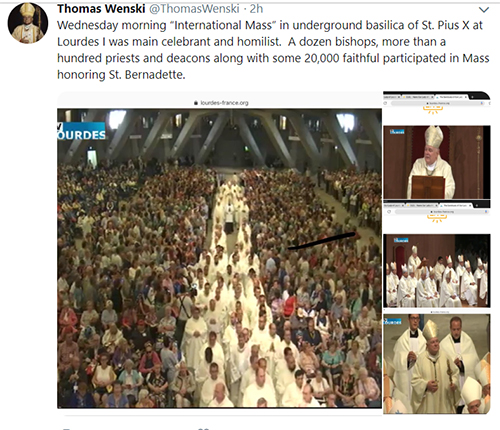 Archbishop Thomas Wenski posted these photos on his Twitter account (@ThomasWenski) after celebrating the July 3, 2019 International Mass at the underground basilica in Lourdes, France.

Likewise, in the Sermon on the Mount, Jesus, as the new Moses, tells us that as citizens of God’s kingdom through baptism, we also have rights: We have a right to the kingdom of heaven. As Jesus says, blessed are the poor; theirs is the Kingdom of Heaven. We also have the right to be comforted, to have our thirst for righteousness satisfied, to receive mercy, to be called children of God. But rights do not come without duties. And thus to follow Jesus and to inherit the Kingdom, we must be peacemakers, we must be meek, we must thirst and hunger for justice, we must be clean of heart, and we must be ready to endure insult and persecution.

The world tells us that it is good to be important — and so people seek to make their lives meaningful and happy by running after pleasure, power and plunder. But such pursuits bring “woe” and not “beatitude.”

Jesus is telling us here that it is more important to be good. It is not the “beautiful people” that will be blessed or happy but rather those people whom the world might consider as “nobodies” and insignificant; but because they embrace the cost of discipleship, they joyfully struggle to love and live the truth of the Gospel.

If you want to be happy, to be blessed, make the beatitudes your attitudes!