St. Gregory School shares half the take from its walkathon with families affected by Irma 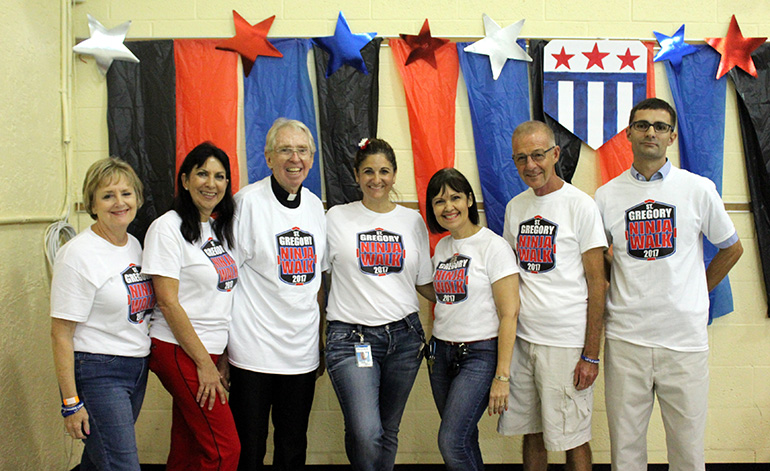 Pictured on the day of the walk-a-thon that donated half of the money raised to the Basilica School of St. Mary Star of the Sea, from left: Jan Bennings, Donna Wells, Father Michael Hoyer, St. Gregory's pastor, Carla Landron, walk-a-thon chair, St. Gregory School Principal Caridad Canino, and Father John Baker and Robert Wright, pastor and principal, respectively, of St. Mary Star of the Sea church and school.

PLANTATION | Every fall, St. Gregory School hosts a walkathon to raise funds for school improvements. This year, given the passage of Hurricane Irma through the Florida Keys, the school decided to share half the proceeds with the Basilica School of St. Mary Star of the Sea in Key West.

St. Mary Star of the Sea is where Father John Baker, a former parochial vicar at St. Gregory, serves as pastor. A flyer announcing the walkathon noted that he “touched so many lives while he was here.”

“Our 8-acre campus resembles a war zoneâ¦” said Wright, who returned to Key West after the storm to find over half the trees down, no power, mold beginning to form, rust taking over, and debris covering their outdoor hallways.

“As bad as damage may be to our physical structures, our first concern is for the heart of our school: our families and staff,” he added.

Many of them returned to find they don’t have a home to come back to. Faced with having to rebuild their entire lives, some families may not be able to afford tuition.

That’s where the funds raised by St. Gregory students and families will go: towards the Catholic education of students who may not be able to continue in the school due to their families’ devastating financial situation post Hurricane Irma.

He said many school families were financially affected by Irma and may not be able to continue having their children in the school. He suggested St. Gregory students could raise funds for tuition assistance.

“When people are in trouble, you lend a hand. It’s what you do,” said Wells.

Articles(42)
Basilica of St. Mary Star of the Sea

Articles(11)
Basilica School of St. Mary Star of the Sea