Holy Mass for migrants in Rome

Archbishop Thomas Wenski is in Rome today, taking part in Pope Francis' Mass with migrants and refugees. The Mass marks the sixth anniversary of the pope's visit to the Italian island of Lampedusa. See the story from Vatican News below.

VATICAN CITY | He had been pope for only four months when he made a surprise visit to Lampedusa. It was his first pastoral visit outside Rome. This tiny island, halfway between Sicily and the coast of North Africa, has become one of the main European points of entry for migrants and refugees trying to cross the Mediterranean.

It was on July 8, 2013, that Pope Francis spoke of the “globalization of indifference.” The result, he said on that occasion, is a society that “has forgotten how to weep.”

Pope Francis has recalled that visit to Lampedusa every year since then with a special Mass for migrants. Around 250 people attended the pope’s Mass this year, celebrated at the Altar of the Chair in St. Peter’s Basilica. Most of those present were migrants, refugees, and “those who are dedicated to saving their lives.” They were all specially invited by the Migrants and Refugees Section of the Dicastery for Promoting Integral Human Development, responsible for organizing the event. 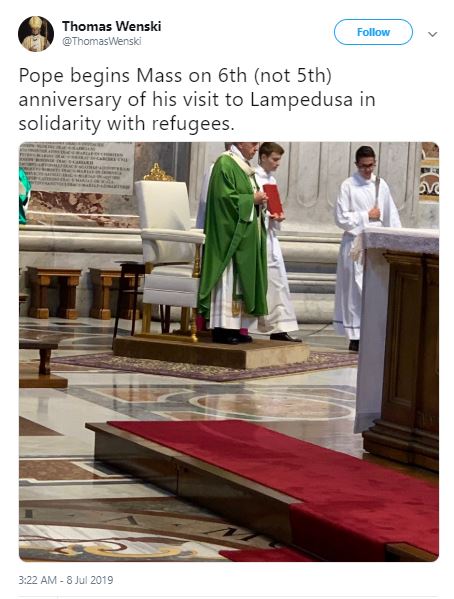 Archbishop Thomas Wenski posted this photo on his Twitter account July 8, 2019, from his vantage point on the altar during the Mass celebrated by Pope Francis with migrants and refugees.

The pope’s homily focused on the First Reading from the Book of Genesis that describes how Jacob dreams of a ladder on which he sees angels ascending and descending. The ladder represents “the connection between the human and the divine,” said the pope. “It is an allegory of the divine action that precedes all human activity... the antithesis of the Tower of Babel, built by men with their own strength.” Faced with this revelation, continued the pope, Jacob puts his trust in the Lord, asking for protection “on the difficult journey he must make.”

Turning to the words of the Psalm, “O my God, I trust in you,” the pope stressed how the Lord is a refuge for those “who call on Him in times of tribulation,” especially when we realize that “the security of the world offers little worth, and only God remains.” In the Gospel of Matthew, continued Pope Francis, Jesus offers “liberation from sickness and death.” He also reveals “the need for a preferential option for the least,” for the poor.

“On this sixth anniversary of the visit to Lampedusa, my thoughts go out to those ‘least ones’,” said the pope, those “who daily cry out to the Lord, asking to be freed from the evils that afflict them.” Pope Francis then gave concrete examples of those he considers the “least ones”: those who are “abandoned and cheated into dying in the desert;” those who are “tortured, abused and violated in detention camps;” or “face the waves of an unforgiving sea;” those who are “left in reception camps too long for them to be called temporary.”

NOT JUST ABOUT MIGRANTS

“This is not just about migrants,” affirmed Pope Francis. “Migrants are first of all human persons,” he said, “they are the symbol of all those rejected by today’s globalized society.”

Returning to the image of Jacob’s ladder, the pope said the “connection between earth and heaven is guaranteed and is accessible to all. Yet climbing the steps of this ladder requires commitment, effort and grace. The weakest and most vulnerable must be helped.”

Pope Francis concluded by saying he would like to think of us all as “those angels ascending and descending, taking under our wings... the ‘least ones,’ who would otherwise stay behind and experience only grinding poverty on earth, without glimpsing in this life anything of heaven’s brightness.”